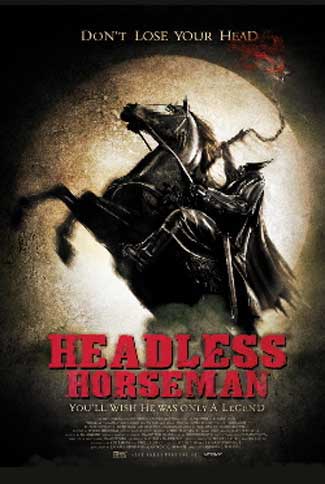 Hooves pounding on cobblestone swiftly approach you as you cross the creaky bridge about to leave town to fetch wood. Your heart basically unearths itself from your chest, it is beating so hard. The legends cannot be true, you think to yourself. You are frozen, an icicle above a slow-trickling river, as if hung from a tree branch, which would slowly melt and cascade into the water. You felt as if you could collapse, but you still saw nothing. You could hear the hoof beats growing louder and louder, but there is no sign of any horseman. A cold breeze blows and seemingly calls your name, then suddenly the bullfrogs are mimicking the wind and mumbling an eerie song where you and death merge and become one.

Shivering from fright you step back into town and decide the woods aren’t so inviting tonight. As you make your retreat, never moving your gaze from the woodsy path, you see a figure illuminate from the foggy night. With jaw agape you back right into the porch of a house and bang your head. After you shake off the cobwebs, you notice that the source of the noise was a horse-driven carriage. It approached in the distance, and you laughed to yourself for believing all of that hocus-pocus. You weren’t as superstitious as the rest of them, you just scared much easier. You crossed the bridge, walking off of the main path and you gathered some kindling. As you began your return to Sleepy Hollow, you saw that the carriage had stopped itself right before crossing the bridge.

You found this odd, but you approached the carriage from the rear to see if they needed some assistance. You placed your hand on the tail-end and quickly pulled back in pain, the carriage was blistering hot. Suddenly, you felt heat radiate from the wagon and you stumbled back. A fiery explosion erupted and the carriage disintegrated before your very eyes. Beyond the flames you could see a tall, black horse erupt like a volcano on its hind legs and it whinnied as embers and smoke frothed from its nostrils. The carriage was now rubble, and through the smoky haze you saw clearly a figure in black upon the demonic horses back. It wore a black cape, which majestically swayed while the horse stood, with embers like fireflies sparkling about. In the horseman’s arm clasped tightly was a pumpkin, with a terrible face carved in it. As he landed he fit the pumpkin where his head should’ve been and pulled the reins. As if he was a part of the fire, spreading and catching the horseman frenzied towards where you stood, sheathing a sword, with which you knew he would try to claim your head. You could only muster to stumble backwards, and as he was just upon you fell into the river, totally helpless. Yet, for some reason the horseman halted, and would not cross the river. The horse whinnied and he galloped off into the distance, and you would never see him again.

Published in 1820, author Washington Irving had created a monster. Literally. The short story known as “The Legend of Sleepy Hollow” is a timeless tale that is constantly mimicked and emulated in today’s pop-culture. In the original story, Ichabod Crane, who is the main character is stalked by the horseman. It’s highly interesting to note that this legend may have been just a mere hoax even within the fictional story. Ichabod is in competition to win Katrina Van Tassel’s hand in marriage with a young man named Abraham Van Brunt. The implication within the story is that Ichabod, who was keyed up and very superstitious was taken or frightened off by the horseman in the end. The way the story is told implies that the horseman that appeared in flesh, may actually have been Abraham, scaring away the other suitor in Katrina’s life.

The legend claimed that the horseman was a Hessian soldier, killed in a battle during the Revolutionary War that was waged in the woodsy area surrounding the town of Sleepy Hollow. It is said that a cannonball severed the horseman’s head in battle, and now he decapitates his victims, somehow gaining vengeance on the townspeople.

Other adaptations include a silent film in 1922, a Disney cartoon in 1949, and the Tim Burton/Johnny Depp Collaboration in 1999. (SPOILER) In this version, many things were altered from the original short story. It came to be that the horseman could be controlled if you had his severed head, and could be used to wreak havoc on people at the desire of the beholder of said head.

(END SPOILER)
Interestingly enough, The Legend of Sleepy Hollow is a myth that spawned from an actual German folktale by Karl Musaus. But, it is amazing how there can be legends born within fictional stories. This story, however, is a fear that we have all come to know. Without a face to put to this monster, it becomes even more frightening for people. Our imaginations can be more terrifying than any monster, and when put up to the job we can all think of some insanely scary things.

This faceless phantom may not be able to cross water, as most ghosts can’t, but when put to the task he’ll hunt you with an unfathomable force and will. I’d highly recommend not leaving your city or town for the woods, because every legend is born from fact, and Sleepy Hollow may be closer to you than you think.