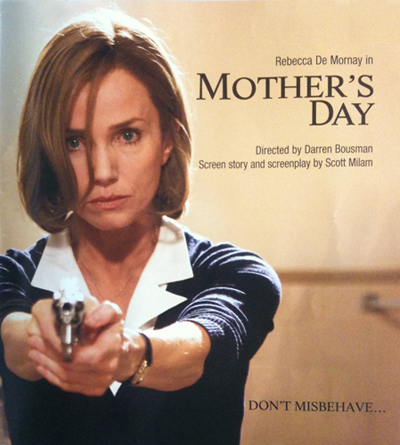 The theatrical release date for this remake has been up in the air for quite some time, but now we finally have a date for any of you who have been on the edge of your seats daily waiting to hear this…Ready?!?! April 1st is when you will get to enjoy the Darren Bousman’s remake of Mother’s Day. Here’s the scoop on what the film’s all about:

After a bank robbery gone wrong, three brothers head for home, hoping their MOTHER (Rebecca De Mornay) can provide them with a getaway. The youngest brother, JOHNNY (Matt O’Leary), has been shot, and their back-stabbing former partner has gotten away with all the cash. But when the brothers get home, they find that all their stuff is gone and Mother is nowhere to be found: She lost the house months ago in a foreclosure. The new owners, BETH and DANIEL SOHAPI (Jaime King and Frank Grillo), and their guests, gathered for an ill-timed birthday party, become the brothers’ unwitting hostages. Not long after, Mother arrives, along with the boys’ sister LYDIA (Deborah Ann Woll), and it soon becomes clear that Mother will do absolutely anything to protect her children. In one terrifying evening she brilliantly takes control of the situation and masterminds her sons’ escape from the law. Sides will be taken, secrets revealed, and sins punished as the hostages struggle to make it through the night alive.