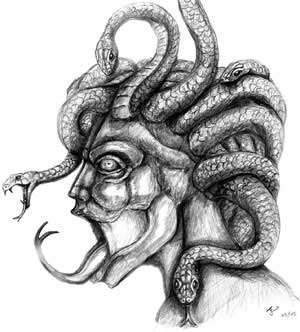 The youngest of the three Sisters, Medusa was also the most beautiful. She and Poseidon became romantically entangled, and they violated Athena’s palace. Other versions of this story show Poseidon raping Medusa or Medusa seducing Poseidon. When Athena finds out that they desecrated her temple, she transforms Medusa into a hideous monster, with living serpents for hair and the curse of turning anyone who looks at her into stone. No one would ever look at Medusa’s astonishing beauty again, she was now a picture of horror and fear. Much different from when she would instill jealousy in women and consume the hearts of men.

Meanwhile on the island of Seriphos hatched a bridging story. King Polydectes was adamant that he would marry Perseus’ mother. Perseus Did not want Polydectes marrying his mother, and he let the king know that he had no intent on letting the marriage occur. In a plot of trickery, the King sent Perseus on a quest to retrieve the Gorgon Medusa’s head in order to get him off the island. He banished Perseus until he could return with the head of the monster.

Medusa had the ability to turn anyone who gazed into her eyes a stone statue. Without being able to look in the face of your own foe, how can you read their emotions in mortal battle?

After Perseus had defeated the Cerberus guarding the entrance, he entered Medusa’s lair. His men were falling one by one to her stone gaze. Perseus carried a mirrored shield he retrieved from the three sister witches, the Graeae. He defeated the mortal sister by using the reflective shield to his advantage, and by being able to gaze into her face, he was able to make a clean strike and sever her head. The Goddess Athena ultimately received Medusa’s severed head from Perseus as a gift, which must have been quite satisfying for her.

The Gorgons were a race of horrible vixens who with just a mere stare could turn a person into a stone statue. This race has often been used as a symbol for protections and to cause fear among children. Parents would place the Gorgon symbol places that they would not want the children to venture, in hopes they would stray from that area.

The snake-haired lady has made appearances in such video games as Castlevania, and gave Perseus a good run for his money in the fantasy film “Clash of the Titans”. In this film, Medusa had snakes for hair and a serpent-like body. She used arrows to pierce her foes and shook her tale, as if a rattlesnake to intimidate her enemies.

Jealousy can be a bed of knives, and it proved so for Medusa. Athena could not stand Medusa’s unparalleled beauty and chose one single mistake Medusa made to condemn her forever. In the end the question is, was Medusa’s beauty a gift or a curse? Because ultimately it would cause her death.

Such a horrible end to a life, must be cause for an angry spirit. Is the ghost of Medusa forced to haunt the earth, searching for love in her original state of beauty? What would be worse, is if even in the afterlife Medusa was condemned to her fearsome state, never to have love or to be loved. Her apparition would probably be very violent, and seeking any human to prey on.

In the 1964 film, “The Gorgon”, this held true. The spirit of a vengeful Gorgon preyed on residents of a German village. This Gorgon possessed the body of a human, and much like the story of the werewolf, this person would only turn into the Gorgon on a full moon. This is very different than the traditional mythology, and even the petrification process in the movie was slow, and not instantaneous.

Although Medusa was the only of the three Gorgon Sister’s who did not contain immortality, she is probably the single most popular figure in Greek Mythology. She is portrayed on most copies of Edith Hamilton’s Book “Mythology”, and a reminder to most people that beauty sometimes does not come without a price. Medusa would die to Perseus’ blade, but she is forever immortal in the hearts of fans of mythology.