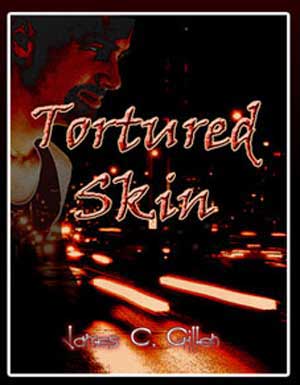 Unless you’ve been living under a rock lately you know that vampires have become a very hot commodity. Thanks to the Twilight series and The Vampire Diaries the entire world has gone nuts for the bloodsuckers (OK, I’ve been patient. First zombies were the “in” thing, now it’s vampires. When are my personal favorites-werewolves-going to get their time in the spotlight?). It seems that everybody and their cousin has written a vampire novel of late and while some of them are just plain lousy if you look hard enough you’ll find a pretty good one. Tortured Skin by James C. Gillen belongs in the latter category.

Paul Issacs is a vampire executioner living in a world where human and vampires live side-by-side. He has an intense hatred for vampires and wants nothing more than to wipe as many of them off of the face of the earth as possible. Paul has a bad reputation as most people sees him as a violent vigilante who is way too brutal when dealing with vampires. As a result, the Vampire Council is a constant pain in his ass and even though he has an uneasy alliance with local law enforcement they too disagree with his methods. While investigating a series of grisly murders that he believes were committed by a vampire Paul gets more than he bargained for and soon finds himself in the middle of a war between a group of powerful local vampires and a gang of dangerous shape shifters.

I think that the premise of the novel is brilliant. I love the idea of humans and vampires coexisting. What I think is the best part is that in the world of Tortured Skin it is no secret to anyone that vampires exist. They live and work with humans and the general public is well aware of them. They don’t just lurk in the shadows like a secret society and have rights and privileges just as the humans do. Of course each person has his or her own opinion about the vampires. There are those like Paul who hate the vampires and want them eradicated, then there are the people who love, and even worship them (I’m sure that these people hang out at Hot Topic and love Emo music). I also dig the fact that some of the vampires hate being members of the undead and long to just be normal once again. Overall Gillen has created quite an interesting world and I commend him for having it take place in the modern time as opposed to the future as I have a feeling that a less talented writer would have done.

With that being said I do think that there are some elements of the plot that have a “been there, done that” feel to them. We have the whole vampires vs. werewolves thing that has been done countless times before. We also get the old “character is poisoned and must do something against his will in a certain amount of time so he can get the antidote” scenario that has been done to death in the past (and is it just me, or is Paul’s origin a little too close to Batman’s?). Don’t get the wrong idea here, I’m not saying that the plot is bad, but there are just a few things that I feel could have been tweaked a bit.

In general I thought the characters were well-done and I enjoyed the majority of them. Paul is a very cool, take no prisoners, kick ass kind of guy that readers will really like. Not only is he a badass vampire killer but he also has a personality as well. I’m going to go on record here and say that it won’t be very long before Paul Issacs becomes a favorite character to a lot of horror fans.

Other than Paul, Piel and Angie are probably the best characters from the book. Piel is the dangerous leader of the shape shifters who is unique because he can change into whatever creature he wants (we see him as a snake, a dragon, and a spider). He also has an interesting (and a little depressing origin) and I think he make a great antagonist for Paul. Angie is a tough werewolf chick who is constantly horny. She has a crush on Paul and is obsessed with having sex with him. She is just a very fun character (and since I love werewolves (and hot women in tight leather) it is no surprise that she quickly became my favorite character.

On the other hand, there are also some characters that seem a little pointless. Quinn is this vampire master who is supposed to be all powerful but the very few times he is seen he really doesn’t do anything that amazing. Virgil and Maximilian are basically Quinn’s lackeys and for the most part are interchangeable. The vampire Dieter is just sort of there to make threats at Paul and is more of an annoyance than anything. I think that the problem may be that there are just too many characters and perhaps a few of them could have been trimmed.

I do like Gillen’s writing style. He does a great job of being descriptive without being overly descriptive. He gets to the point quickly and doesn’t ramble on and as such the book is a fairly quick read. I wonder if he writes screenplays as a great deal of the book is dialogue between characters (which is a good thing as he has a talent for creating wonderful dialogue). If he hasn’t written a script I think that he should try his hand at it as I believe that he would be a natural.

I also wanted to take a moment to point out that there is a lot of good-old fashioned violence that takes place in the book. We get several murders in which a body part is amputated, a bunch of cops slaughtered by a giant spider, several beheadings, and several scenes of torture (including a very cool bit where we find out what happens when Holy Water is poured into a vampire’s eyes. Fun stuff). If you enjoy blood and gore like me then you won’t be disappointed.

Though there are a few flaws (and what novel doesn’t have them?) Tortured Skin is a pretty damn good book. I have never really been into vampires myself but I really enjoyed it. If you are into vampires and just don’t quite get the whole fascination with Twilight pick up a copy of Tortured Skin, I promise there is no love story and you won’t find a single sparkling vampire.