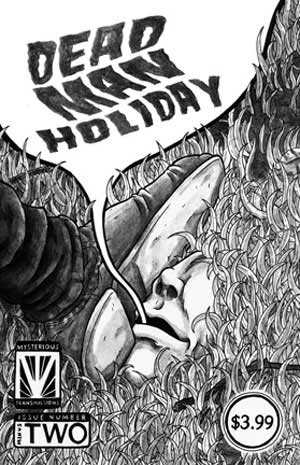 Dead Man Holiday is a comic that never wants to stray from the words weird and subversive. The artist and writer, Colin Panetta, states that he hates exposition and wants the reader to figure out every facet of the plot himself without any extemporaneous dialogue or flashbacks, and he definitely doesn’t go back those words. The other thing of note is the first issue is -3 and the numbering moves forward from there.

The strange numbering I feel is another chance for the writer to do something weird for the sake of being weird. The main character, whose full name has yet to be revealed, wanders around the abandoned community of Little Atlantis carrying around a baseball bat and a Star Trek style phaser, because of his job. My theory is that the hero’s occupation is to kick bums and the homeless out of the abandoned buildings that reside in the urban wasteland Little Atlantis, but none of this is expressly written so anyone can create their own theories about the comic. While wandering around Little Atlantis our nameless hero encounters a supernatural being of some kind, a walking skeleton in robe who is undisturbed when the hero hits it with a baseball bat and shoots it with its phaser. When the hero talks to his boss/father about the incident he actually believes him, citing someone’s name that if the book had any exposition would clear up the mystery of the robed skeleton.

The next issue only more weirdness ensues as the hero confronts more of the supernatural on the job. I really enjoy Panetta’s artistic vision as we wind our way through the streets of Little Atlantis. Panetta’s style of square geometric penciling and surrealistic punk settings and characters remind me very of Jim Lawson’s work on Teenage Mutant Ninja Turtles. In fact at times our the hero in Dead Man Holiday is the spitting image of a young Casey Jones lurking around an abandoned warehouse with a baseball bat.

The art is really the selling point of this comic, because of the minimalist use of dialogue and no exposition the reader is forced to follow the hero through the bleak world of Little Atlantis as he confronts more and more strange supernatural beings and be extra observant of the heroes surroundings and the few words of dialogue that are spoken through each issue.

I do feel that this early in the series the hero’s romantic subplot with a woman he randomly talks to on the street is a bit tacked on. Hopefully Panetta will have a decent payoff with this subplot as well as the mystery involving the hooded skeletons and other supernatural creatures he encounters while skulking around Little Atlantis, and if he doesn’t the ride sure was fun.

For those interested in the weird, subversive, or just something off the horror comic beaten path of things like Jesus versus Zombies, I really recommend this comic. You can order or download this comic online at deadmanholiday.com