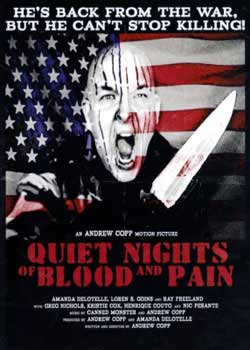 A Giallo styled slasher about a Soldier home from Iraq who still thinks he is supposed to be killing the “enemy” even though he is back home.

QUICK FIX:
William, a veteran of the Iraqi war, is finally back home in the U.S. But instead of going to work for a government agency like, say, CTU, or even getting a job parking cars, he suffers from a bad case of Post Traumatic Stress Disorder no thanks to all the horrors he witnessed in the war and the acts of torture and violence he was made to commit in service of his country. It also doesn’t help that his delicate psyche won’t let him deal with the fact that he is in fact now home…nope, he’s on a mission to seek out all those that appear to be terrorists, traitors, and the like and to exterminate them with extreme prejudice. When he crosses paths with Adrienne, another vet but on the opposite end of the spectrum as William, well…that can’t end well, can it?

RAMBLINGS:
“You don’t seem to want to accept the fact you’re dealing with an expert in guerrilla warfare, with a man who’s the best; with guns, with knives, with his bare hands. A man who’s been trained to ignore pain, ignore weather, to live off the land, to eat things that would make a billy goat puke.” – Colonel Samuel Trautman; FIRST BLOOD.

Horror movies with an agenda or a statement to make to the audience can be a very slippery slope to navigate. Most times, more often than not, they wind up being more preachy tripe like DIARY OF THE DEAD or THE THAW that try way too hard to drive their point home than to be any kind of entertaining horror movie. But I must take my hat off to Mr. Andrew Copp – sure, there’s blood and gruesomeness here, and there are some pot shots taken at our previous administration, and there is a statement made here as well. But sides weren’t really taken that I could pick out, and the messages were subtle. In my own humble opinion, this flick struck me more as a statement about how our government would rather have slovenly sheep that they can easily control instead of being of, by, and for the people like they are supposed to be; and that in their own mind, especially from what I’ve seen of our newest and previous couple of administrations, they have the impression that they are God-like and infallible…and I enjoyed that part of the film I think more than anything else. Maybe I’m missing the point entirely, but that is what I took away from it.

But wait, there’s more…what, you say? Character development in a shoestring budget horror movie? Damn right there is. Sure, there are scenes of sadistic brutality throughout, no doubt about that. But in addition to those and his subtle messages, most of our time is spent between William and Adrienne (especially William – it’s his movie, after all) and what makes them tick, and how they’re both dealing with their similar affliction in radically different ways. It can be tough for any vet who’s seen any action during wartime to fit back into society, and Copp’s handling of this material is most impressive as we almost feel the pain for these two characters ourselves due to the effectiveness of the scenes and the way they’re portrayed.

LAST WORDS:
If you’re expecting huge production values and top-notch professional actors, and THX sound, then you’ll probably want to sit this one out. But those of us that love and embrace the indie horror world will be enjoying watching what everyone did with obviously so little money to get the job done. In the end, I was impressed, at times shocked, and once or twice even a little moved by it all. Looks like this flick doesn’t street till early 2010, but if it sounds up your alley then it’ll be well worth the wait.