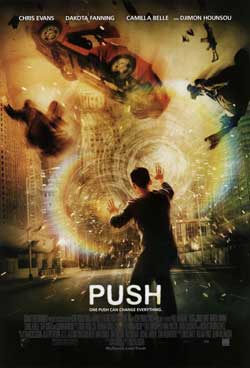 On the run from the Division, a dangerous government agency that uses people with psychic abilities to do their bidding, telekinetic Nick Gant (Chris Evans) and clairvoyant Cassie Holmes (Dakota Fanning) team up to find a third psychic who can help them destroy the organization. But when the Division picks up their trail, it sends a powerful agent (Djimon Hounsou) to stop them at all costs. Paul McGuigan directs this thriller.

Push is a 2009 scifi thriller directed by Paul McGuigan. It stars Chris Evans, Dakota Fanning, Djimon Hounsou, and Camilla Belle. It’s about different groups of psychics with different powers while they try to take down a government agency (the Division) that’s been injecting them with drugs in order to make them into soldiers. The movie opens with a young Nick Grant (Colin Ford) and his father (Joel Gretsch) running from the Division because his father is refusing to join. When they see that they can’t out run them anymore, Nick’s father tells him that he will later meet up with a girl with a flower and to do what she says to “save us all”. Nick is able to leave the room through an air vent but his father dies.

Ten years later, the American Division is putting drugs into a girl (Kira, played by Camilla Belle) who is psychic. The test seems like it’s not doing well, but she then jumps up and is able to get out of the hospital. Two days later, the adult Nick Grant (Chris Evans) is hiding from the Division and is using his psychic powers to gamble. He ends up making a mistake and now owes money. He goes back to his apartment where the Division has now found him and has taken some of his stuff. The two agents Mac (Cory Stoll) and Holden (Scott Michael Campbell) demand to know if he’s seen a girl.

He hasn’t and they leave. Cassie Holmes (Dakota Fanning) then shows up at Nick’s apartment, she lets herself in and says that she can see the future and that they need to go find a case that’s linked to a missing girl. The case has $6 million. Nick doesn’t want to do it and they then get chased by other psychics. Nick gets hurt but gets healed. Cassie then gives him a flower. Nick then remembers what his father told him and has no other choice but to help her.

The action scenes in the movie are pretty good, but the director seems to be more focused on directing those scenes than any other in the movie. They also like the camera to get real shaky while someone is falling, which can get annoying. Dakota Fanning does show us that she’s not just another child actor, we see her becoming another Jodie Foster. Chris Evans is great, too and we hope that he does some more dramatic films because he is a really good actor.

Aside from the wonderful acting, the movie just doesn’t hold up. It seems to pick itself up during the last hour, but it’s just not enough to make us recommend it. The overall feeling we get is that the filmmakers bit off more than they could chew. The premise is complicated enough to beg for a Whitewolf player’s manual with the DVD. The storyline is convoluted, which a repeat viewing might absorb some of the confusion, but the movie failed to give us another reason to watch it a second time. The fun factor just isn’t there.

Not to say that the movie is bad. It’s certainly creative, and while the characters aren’t initially engaging they do grow on you. The visual style has the feel of a foreign film which enhances the atmosphere. And a special kudos to the movie for knowing when to end. For anyone unfamiliar with the Hitchcockian term ‘MacGuffin’ it’s the plot element that the characters will kill over but the audience doesn’t care about. The MacGuffins in Push are left unresolved which makes the ending all the stronger.

We wanted to like this movie. We agreed that if we hadn’t been reviewing it we would have lost interest after the first forty-five minutes. Having seen the ending we give the final vote a C. If you’re into sci-fi thrillers, Push is a nice diversion. Not anything seriously wrong with it, except that ‘a nice diversion’ is an innate backhand to a sci-fi thriller. Perhaps if Neil Gaiman or James Cameron had been brought in for supervision on the writing and directing respectively Push could have been something special.