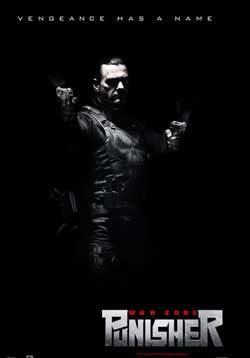 Frank Castle (Ray Stevenson), a one-man force of vengeance known as “the Punisher,” battles mob boss Billy Russoti (Dominic West). Left disfigured by the encounter, Russoti reemerges as Jigsaw, a psychotic villain with a small army at his command. Too bad for the baddie that the Punisher is preparing to annihilate Jigsaw and his reign of terror, armed with a cache of high-tech new weaponry by the handy Microchip (Wayne Knight).

Punisher War Zone is a much needed reboot to the character of Frank Castle. Just like Marvel’s previous reboot the Incredible Hulk no references are made to any previous movie and toss out the tampered origin story. “War Zone” tosses out the ridiculous family reunion massacre of the 2004 film The Punisher and with a simple flashback the comic book Punisher origin was restored, Frank Castle’s family stumbled onto a mob execution and were killed. These events led to Frank Castle creating the guise of the Punisher. A welcome addition to War Zone is Punisher’s techie and weapons supplier sidekick from his series in the 90’s, Micro, superbly played by Seinfeld and Jurassic Park’s Wayne Knight. This movie was all about taking down criminals using as much gore and onscreen violence as possible while still portraying how Frank Castle wrestles with his moral ambiguity.

The movie begins with news footage of a famous crime boss being acquitted of murder. Cut to a gigantic mansion where all the members of a giant Italian mob family are gathering to celebrate the mob bosses “beat the rap”. Enter the Punisher guns blazes taking out every member except for Billy the Beaut and his gang. After the massacre we learn of the police’s tolerance The Punisher’s brand of justice. The next day Billy the Beaut continues his weapons smuggling business, content he may be the only one left in his family, but that makes him the boss. Billy is continuing his operations at an abandoned recycling plant, when the Punisher shows up to take out Billy and his operation he unwittingly shoots, Nicky Donatelli an undercover FBI agent.

During the ensuing firefight the Punisher throws Billy the Beaut into the glass crushing machine, leaving Billy’s face incredibly disfigured and making everyone call him by the more supervillainy name Jigsaw. Jigsaw’s next move is to free his brother James AKA Looney Bin Jim.

Because Frank accidently killed an innocent man during his war on crime he begins to have doubts whether he should continue. He tries to appease his conscious by giving Donatelli’s wife reparations, but she is not ready to forgive or accept Castle. Just as the Punisher was about to give up his vigilante ways, Micro informs him that Jigsaw is going to target Donatelli’s wife and daughter and Frank Castle is back on the job. The Punisher helps the Donatelli family escape from Jigsaw and Jigsaw and his gang is actually arrested by the police, but is soon let go for information involving the sale of a chemical weapon to Arab terrorists that was going to be unleashed in the middle of New York. With Jigsaw almost immediately back on the street, he quickly set out to create an army to take out the Punisher. As a safety measure Jigsaw kidnaps both the Donatelli family and Micro.

Jigsaw and his sidekick Looney Bin Jim are the best comic book villains I have seen in a long time. Jigsaw was played by Dominic West an actor from the much beloved HBO show The Wire. West really knows how to have fun with a role as a villain giving a scenery chewing performance that makes you love Jigsaw more and more during each evil act he accomplishes, culminating with a rousing speech convincing all the local gangs and hoods to effectively be cannon fodder for his war the Punisher. Obviously the Punisher doesn’t fit the standard superhero mold, but that doesn’t make the spot on characterization of all the characters in the movies any less impressive.

I had my doubts about the casting of Ray Stevenson, a British actor most well known for his work on HBO’s Rome, but Ray brought the toughness and attitude and was lacking in Thomas Jane’s performance four years earlier. The most important thing to mention on a horror website about this movie was the gore was spectacular, as Frank Castle took down mobsters left and right spilling blood of epic proportions, even punching a man so hard his face caved in. Go out and see this gem of a comic book movie whether or not you are familiar with the character; if you like action and gore you will enjoy Punisher War Zone immensely.