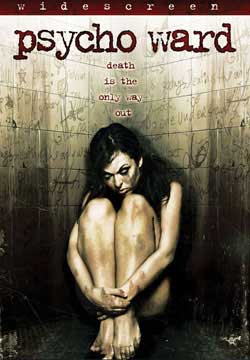 While on a research outing, a group of urban explorers get more than they bargained for when the visit the site of an abandoned mental hospital and discover it’s hiding a terrifying secret. Trapped in this giant prison, they start to disappear one by one. Their only chance to escape… to put together seemingly random clues, avoid a killer, and use their unique skills to survive.

Slasher films are a dime a dozen, they have been since the 80’s, and till this day are a driving force in the direct to video market. Every once in awhile, a film comes along that will redefine the genre, change the playing field. “Psycho Ward” is NOT that film. The film tries to introduce a new face in horror, an icon, that never really works, NOR is that a bad thing. Everything that happens from beginning to end is predictable.

I was calling the shots all the way through. What this does mean is that “Psycho Ward” has an interesting visual style and a killer soundtrack but really doesn’t offer much more than a tired, predictable format, a couple of nice boobies, a bit of blood, and silly dialogue. This isn’t a bad thing, this is a silly movie but it’s actually kind of fun to watch.

While out doing research for a project, a group of young folks (surprise, surprise)led by Dr. Magellan, go to an abandoned mental facility to investigate it’s horrifying past, that may have included government experiments using killers as guinea pigs. What they don’t realize is that there is an evil lurking in the dark corridors that is watching them, waiting for the right opportunity to begin plucking them off, one by one, and satisfying his own twisted agenda.

And that is it, nothing new, by the numbers type of slasher film that introduces us to a large masked killer that bares a striking resemblance to the WWE’s Mankind and/or Kane. That is fine, no big deal, just that everything was so predictable that the film was almost a waste. The acting was fine for what it was but as far as characters go, just the typical cardboard cutouts of standard horror film characters. We have the nice girl, the wise ass, the good guy, the tramp, etc. Nothing is adding to really spruce the characters up and they do, almost every time, exactly what we expect them to. And, without giving anything away (though you probably have a pretty good idea what you are getting in to) the ending left me a bit dry but the final scene actually worked in its favor.

All isn’t lost, though the story does absolutely nothing for me, there is some nice effects work at play here. No crappy CGI, just good old fashioned fake blood and prosthetics. The effects were done well and used at just the right times. If I had a complaint in this area is that there were too many cut aways when things were getting good. It did work more than not. The film was competently shot, looked very professional for a low budget film, and was expertly edited by Martin Buzora. The pacing was on and enhanced by a terrific metal score by Sonica Disturbia. This is the exact type of film that I referred to in my review for “Town Creek aka. Blood Creek” where the soundtrack can help to save a movie and it worked here. 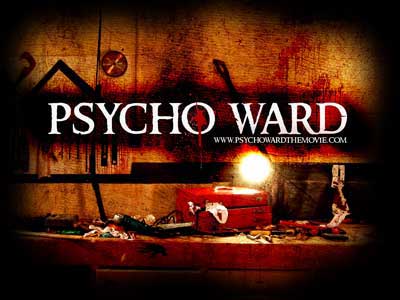 The slasher sub-genre has grown so tired that for me to flip out over that type of film they better have a unique hook because I am not biting. There are many times I will find myself bored at night where I may or may not fall asleep. When this happens, though it annoys the hell out of me, I like to try and occupy my mind as best as possible. “Psycho Ward” is the type of film that I would put on to kill time. If you’re putting together a bookcase, this is the type of film that gets played in the background. I don’t think that I can really recommend this film but I won’t slam it either. It is the type of film that can be used to fill or pad out your day when you are waiting so desperately for something better to come along.