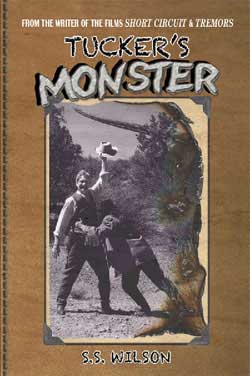 I admit that when I hear the term “young adult fiction” I am forced to assume the worst. I think sparkly vampires with an addiction to Dido music sitting around stalking teenagers. Tucker’s Monster by S.S. Wilson is, thankfully, not that kind of book. It is, at its heart, an adventure story that reminds me of things I would read as a child. I hold Harold Tucker up there with Quartermaine.Tucker’s Monster follows the lifelong ambition to cattle rancher Harold Tucker and is told Whitney, Harold’s zo-ologist. Tucker’s obsession is finding a real life dinosaur but until then he is complacent with tracking down anything of a suspicious nature from Werewolves to Ghosts.

We begin with the grandson of Whitney giving us some backstory on how the book we are about to read came into existence. The rest of the work is written by Whitney about his experiences with Tucker and his wife Jenny and their search for a dinosaur. Obsessed with the likelihood of his looming death in his mid-40’s; Tucker has nearly given up travel. He places ads around the world offering top dollar for information to the finding of all manner of creature with special consideration given to his white elephant; the dinosaur.

In a book such as this you are often hard pressed to get attached to characters let alone have enough time to flesh them out. S.S. Wilson has been able to do both of these things is this well-crafted and ingenious tale. If you are looking for obsessive blood and gore you will not find it here but you will find brilliant dialogue written by someone that has don’t extensive research for the time period in which the story is set. Each scene and story point is created well to lead us, the reader, to the next point of the story and so on. With his writing ability we genuinely know these characters and we root for them in their tasks. There are parts that are humorous and others that are sad but the theme, I feel anyway, is no matter what your dreams; follow them no matter where they may lead you.

Tucker is a strong man who is streetwise while Whitney is college educated. Jenny, Tucker’s wife, is an American Indian woman whose age is vastly unknown but Tucker swears she was legal to wed. Both Whitney and Jenny are Tucker’s best friends and confidants. They will follow Tucker to the ends of the Earth but will also ground him when necessary despite how bull-headed he may become.

The story of Tucker’s Monster is also rare in that it can most certainly be an educational tool. S.S. Wilson’s no-detail-left-unwritten approach fills the novel with words that are not common or dumbed-down for the reader. His use of scientific terminology is also researched well. This is the kind of story you can read to your children without worrying about the content. There is enough action to keep your attention and plenty of drama and humor to break up any lulls in the story of which there were none. Even the secondary characters that you only meet briefly had a heart and their own voice.

Pick up Tucker’s Monster by S.S. Wilson and read it to your kids. Have a dictionary and encyclopedia handy. Let them read this brilliantly crafted story while learning something from it. From news words to plant and animal species to geography it is all here for the taking. It is great fun, adventurous and emotionally fulfilling.