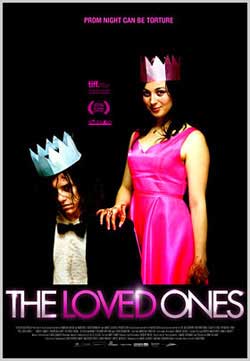 Brent is already a screwed up kid, he accidently killed his own father in a car crash and he’s a teenager which anyone can tell you is never an easy time. Brent’s problems are about to get a lot worse however with the threat of a school dance looming ever so closer. Brent’s problem however, like most teenage boys, isn’t trying to find a date for the dance, its trying to get away from the date that he has.

“What do you mean they stabbed the dog?”

The Loved Ones is a slick one, the viewer gets that just from the very beginning of the film where the soundtrack plays a very big part. In the beginning of the film Brent is driving with his father and discussing the things most teenage boys that get along with their fathers discuss. The conversation however is interrupted when there is a suddenly a young man covered in blood standing in the middle of the road. Brent swerves to miss and instead crashes the car which kills his father….this has no doubt left several scars on the young man. When Brent is shown again these scars are apparent by the way the boy keeps his appearance (he has long hair and wears Metallica shirts).

With the exception of killing his father Brent seems to have quite the normal life for a teenager, he has a best friend named Jaime and his mother Carla loves him very much. Brent also has a girlfriend named Holly who lets him have sex with her in her own car; remember Brent was in a car crash therefore he has a phobia for cars. During my initial viewing of the film I thought this was where the film was going however Sean Byrne threw a loop at me that I didn’t see coming at all.

Brent you see has recently caught the eye of social reject Lola. Lola shyly walks up to Brent and asks him if he wants to be her date for the dance and when Brent turns her down Lola decides that she will have Brent no matter what. What follows is at times quite disturbing and at other times quite funny, you see Lola’s father kidnaps Brent and takes him back to their house where the two love birds can have their own dance….scary part is this isn’t the first time Lola has done this.

Although the plot for The Loved Ones doesn’t sound that original Sean Byrne has done a good job of capturing the feeling of a high school teenager film and blending it quite well with the current wave of torture p*rn to the point where at several points in the movie the viewer might find themselves asking if they are in fact still watching the same movie.

After Brent is kidnapped the viewer is forced to sit through some pretty disturbing things such as feet being nailed to a floor, household cleaners being injected into the young boys veins, and a version of a back alley lobotomy that will send several shivers down many a viewers spine. The film however isn’t all gore, in between the scenes of Brent being tortured and his family and girlfriend attempting to find him the viewer is treated to scenes of Jaime and his date Mia’s night at the dance, even though they are only really at the dance for a small amount of time. The humor of these scenes though is cut short when the viewer suddenly does realize why Mia is the way she is and then it is almost like an insult to admit that you were laughing at her antics which have to be seen to be believed.
Sean Byrne really likes his music with this film as well and it plays a very big part. Lola has a certain song she sings and listens to quite a bit and even some of the characters are introduced in slow motion while songs are playing. It is this kind of thing that really does make The Loved Ones work, it doesn’t just focus on the gore it allows the viewer time to enjoy and remember just how messed up high school years could be.

Lets talk about the gore though in this one and it is top notch. Gore hounds will definitely find a lot to sink their fangs into on this one, yet there is enough between the gore that it might even be the kind of film one could share with their significant other who doesn’t quite enjoy these types of films.

The Loved Ones is definitely torture with substance….I really wish more directors were able to handle this kind of task.

Tags The Loved Ones