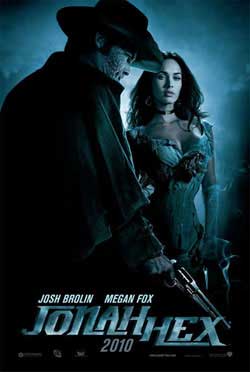 SYNOPSIS:Jonah Hex was a soldier during the civil war, when he refused to follow orders he was punished in a brutal fashion. Attempting to make something out of his life Jonah has turned to bounty hunting for an occupation. It’s only after doing this for so long does he learn that Quenten Turnbull, the man who punished him, is actually still alive and planning a terrorist attack on our nations own one hundredth birthday. Can Jonah find Quenten before it’s too late, oh and did I mention that Jonah also has the ability to speak with the dead?

Directed by: Jimmy Hayward
Starring: Josh Brolin, John Malkovich, Megan Fox
“The fate of our nation may rest on the shoulders of Jonah Hex!”

Let me say before I start this review that yes I do know that Jonah Hex is based on a comic book, however I personally do not know anything about the series, and the review I am going to write now is simply about the film Jonah Hex. Jonah Hex starts off with a voice over and some action sequences basically building up the character of Jonah. Jonah was a soldier during the civil war and he disobeyed orders when he was told to burn down a hospital, for his crimes he was punished. Jonah’s punishment was handed down to him by a man named Quenten Turnbull and the punishment was quite severe you see Jonah was forced to watch his family murdered in a fire while tied to a wooden cross.

Turnbull also took advantage of the restrained Mr. Hex by branding him across his face. The former allies of Jonah then just left the poor broken man tied to his cross and it wasn’t until a tribe of Crow Indians came along and set Jonah free that he was allowed to move on and try to piece his life once again back together. Jonah however did receive one gift through all of his punishment and that is the ability to speak to the dead. This entire back story is also laid out with comic book style animation between the action sequences so right away the viewer is well aware of the character which is a good thing since once the film starts it really does get going quite quickly.

Director Jimmy Hayward may have known that the film was destined to be a stinker (read some of the reviews out there…most of them aren’t very nice) so he at least gave his audience something to look at. The film is set during the “old west” era of our nations history and from the very beginning it is obvious that Mr. Hex has access to the best weaponry that could have been provided in that era (his horse has Gatling guns on its side). Jonah Hex isn’t the only character in his film however Quenten Turnbull it turns out is actually alive and well and Jonah’s “love interest” Lilah is played by Megan Fox who again shows us how easy on the eyes she is…by the way her character is a prostitute.

The plot of Jonah Hex is relatively easy to follow: Quenten Turnbull has stolen a weapon of mass destruction from the United States military; it’s basically a large gun with several barrels that shoot small metal balls. The kicker for the weapon is that eventually it shoots out a detonator ball which causes all of the small ones to explode, the few times the weapon is shown being used in the picture definitely show it being a destructive piece of equipment. The government realizing the threat immediately calls in Jonah Hex who at first isn’t interested until he learns who is behind it so now it’s up to Jonah to find Turnbull and the weapon and stop the mass destruction before it is too late.
Jimmy Hayward really does enjoy capturing fire on film; it is practically in every scene. Just when a viewer thinks to themselves that they possibly couldn’t see any more buildings on fire or explosions Jonah is using a flamethrower or punching someone while his fist is on fire…again I believe Mr. Hayward might have given the viewer such things to look at because the actual story behind the film isn’t all that great…but it is wonderful to look at.

Jonah’s ability to speak to the dead is handled and explained quite well. Whenever Jonah approaches a corpse and touches it the corpse immediately comes back to life, sometimes this isn’t a good thing since the corpses also have the ability to suddenly spring to life and fight so long as Jonah is touching them still. The bodies also have a tendency to begin to burn up once they are animated; fresher bodies tend to burn up a lot faster than older ones. The speaking with the dead ability however isn’t used near as much as it could have been, the character of Jonah Hex seems like a strong character and instead of focusing on a dark story involving a man who has the ability to search the netherworld for answers we get an action movie set in the old west with an over use of fire.
The sets and effects in Hayward’s film however are very top notch and it is quite obvious that someone out there had some faith in the project. Honestly I believe the Turnbull plot would have been a good idea for a sequel instead of the first film, they make it kind of obvious at the end that they want to do a sequel so hopefully they have better luck next time.

Jonah Hex doesn’t rely on scares or horror but for those who enjoy action, westerns and a whole lot of fire will definitely find themselves enjoying this one.