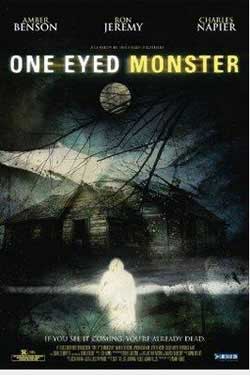 Adult film stars Ron Jeremy and Veronica Hart reunite in this hilarious homage to horror. Stranded by a storm, the cast and crew of a p*rn flick fall prey to a vicious killer when Ron’s (Jeremy) dismembered member is possessed by a bloodthirsty alien. Now they’ll have to destroy the slithering monster before it spreads its deadly seed across the world. Amber Benson, Carmen Hart and Charles Napier also star.

One Eyed Monster is a horror/comedy from Adam Fields that will have you laughing out loud at it’s total goofiness. For those of you that were hoping for a p*rno, sorry the biggest nudity you’ll see here is some boobies and a fake d*ck that is on the loose killing people. The film is also a homage to The Thing and Alien since they are two films that have obviously impressed the director. There is not a serious scare in the film so don’t get your hopes up to high, and there is very little blood. There are how ever plenty of hilarious kills that will get your sense of humor going, if not you must be dead already.

Some p*rn-stars and their crew head up to the snow covered mountains to shoot a p*rn movie and the director of the flick Tim wants it done pronto, like yesterday! The p*rn-stars and crew head up on a little yellow bus driven by old pops while Tim leads them all in his flashy sports car. Ron Jeremy sits in the back with veteran hoochie Veronica Hart making idle chit chat while the arrogant young buck Rock throws insults at them. First time actor on the scene Lance makes goo goo eyes at the blonde Wanda while Angel listens to her ipod. Make up artist Laura has a crush on Ron that he is oblivious too until Veronica points it out.

Once they all get to the cabin most of them retire to their rooms to study their lines and orgasms for the first scene that they will be filming shortly. Wanda and Angel share tricks of their trade like how one uses lidocaine on her privates so when a guy with stubble is down there it doesn’t hurt since she can’t feel a thing. Jonah and T.J. the tech guys are all set up and ready for the first scene to get rolling. Well Veronica wasn’t supposed to have any scenes because she is old but she manages to change Tim’s mind by using her special powers on his well used privates. He goes in all c**ky and comes out a very drained man!

Ron has a little trouble with the scene and heads outside for some air. He thinks he sees a shooting star until it zaps him. Back on the couch he get’s into it with Veronica and after he is drained and freezing on the floor. The guys head over to help him out and notice something very peculiar about Ron, his 9 and 3/4 inch penis is missing! So now this disembodied d*ck is raging thru the house terrorizing them all. Can anyone escape this pee pee on a mission? It wants to take out any and every orifice it can find. You need to guard yourself or the next thing you know you’ll have something plugged!

What can they do to destroy this rampaging appendage? Will anyone make it out of this situation with out being screwed to death? There is a snowstorm blazing outside so there is no way to get off the mountain and away from this 9 inches of manhood. What would you do if you were caught up in this situation? Everyone that is left standing are all trying to think of different ways to kill the one eyed monster. Should they cut it to pieces? Should they electrocute the damn thing? I know it seems that ridding the cabin of this particular pest would be simple but damn that sucker is fast.