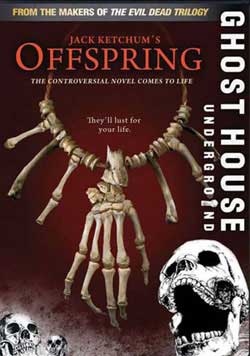 David and Amy Halbard are your typical nice American family; they have even recently added an addition to their clan by having a baby. Amy’s friend Claire comes to visit bringing her son Luke with her, as well as some excess baggage. Claire has been having some troubles with her husband Stephen, it seems Stephen not only beats his wife when he has been drinking he is also on the run from the law. A call from Stephen letting Claire and the Halbards know that he is on his way is the least of their worries however. There is a clan of cannibalistic children who are tearing up the coastline and killing all in their way and stealing their infants. Guess Stephen is the least of their worries now.

Andrew van den Houten’s film Offspring is a sequel to the Jack Ketchum novel Off-Season; one however doesn’t need to read the book to understand what is going on in the film everything gets explained at one point or another. Jack Ketchum also wrote the script for the film, you may remember a few years ago a couple other film adaptations were made from his work most notably The Lost and The Girl Next Door. Ketchum’s style of horror is the kind of nightmare that can happen at anytime and anywhere to anyone you know.

Offspring starts by showing a drunken woman returning from the bar back to her house. The woman stumbles around drunkenly in her yard before she goes inside her house. Once inside her house though she sees a sight that will strike fear into any parent’s heart. A group of children have invaded the house and are eating the babysitter who was left with her infant. It only takes a few seconds before these wild children (they are dressed in leather and furs and look as if they have spent most of their lives in the wild) turn to attack the woman. All of this happens before the opening credits begin to roll and this is one time that you should really pay attention to the opening credits because as they are played the viewer is shown various news paper clippings that tell the story from the Off-Season novel in a way to catch the viewer up to speed (the events take place eleven years after the novel).

Of course the police begin to investigate the murder and call in a seasoned vet named George Peters to help them on the case. George is your stereotypical “I’m no longer on the force so I’m going to drink a lot and drop a lot of one liners” type of characters, very similar to the detectives in the film The Lost. The police of course link the murders to the events eleven years ago and instantly they put a posse together and begin to search the coast line for the clans hide out so that they can stop the carnage before it starts again.

The viewer is then of course introduced to the Halbard’s who seem to be a nice couple. During David and Amy’s morning routine David mentions that he saw a strange young girl at the edge of their field, strange because she appeared to be naked from the waist up. Amy then mentions to David that Claire is coming up to visit with her son Luke, both show signs that they really do not like Claire’s husband Stephen and there is of course good reason all revealed later in the film.

When Claire arrives she talks to Amy and tells her about all of her troubles. Claire has a lot of troubles way beyond the fact that Stephen was abusive to her, he also got her in trouble with the IRS and now he’s ran off. Claire hasn’t heard from him in quite a while (she mentions in one scene that Luke still has Stephens Christmas present wrapped up waiting to give it to him) so it is a big surprise when he calls the Halbard house and informs him that he is coming to visit. David upon finding out immediately calls the police to report that the criminal is in fact coming to their house. While on the phone the receptionist at the police department informs David that there was a murder, so the police force is running on a skeletal crew and suggests that if David has a gun he stand guard ready to shoot Stephen or anyone else that he doesn’t recognize on his property. David shrugs this off not seeing himself as a tough guy and it really is ashamed he does because in the next few hours he really is going to wish he listened to the receptionist.

Offspring really doesn’t bring anything new to the genre; the idea of cannibalistic clans has been seen in many films such as The Texas Chainsaw Massacre, The Hills Have Eyes and even modern films like Wrong Turn. The clan in Offspring however isn’t really a family, which is why they do not look alike, they are all children that are stolen from other homes and raised by the feral clan, now you see why it’s called Offspring.

The films main jump start though is a very brutal home invasion sequence in which the cannibalistic children storm into the Halbard’s house. The scene is chaotic and quite bloody; one of the characters is disemboweled while another is tied up forced to watch the brutal act.

Viewing Offspring is a lot like a riding a rollercoaster, granted it’s a very messy one. The initial jump before the credits is enough to tide you over while Andrew van den Houten begins to set up the story for you. The characters are very likeable, even the child Luke (normally characters like him annoy me in these types of films) and you actually start to worry and care about them as their evening gets progressively worse. The cannibalistic children also get ample screen time where the viewer gets to see exactly how the group lives and communicates with each other. The character Stephen however is nothing but a creep; this is displayed in several scenes. The most noted scene however is when Stephen picks up a young hitchhiker who is on her way to see her boyfriend.

The FX in Offspring are also done quite well there is plenty of the red stuff for all of the gore hounds out there. Since the children mostly use knives and hatchets for their acts of carnage it does get pretty messy. There is of course the disembowelment scene I mentioned above but there is also a frightening scene in which Amy is forced to breast feed one of the cannibal tribes stolen children which could easily make any viewers skin crawl. If that’s not enough for you there is a brutal scalping (if you can call it that) and a scene where the children put sharpened teeth over their own only to brutally bite and tear away the flesh of one of their victims.

The set pieces of Offspring are set up very well and the sets are wonderful to look at. Andrew van den Houten did a very good job at capturing these horrible acts on film, and he didn’t over use the “shaky cam” technique (pay attention film makers). I will state that some of the dialogue is not that great and the cast is limited in the performance in most parts, however if you are a fan of the survival horror branch of our beloved genre Offspring is definitely one to add to your collection.