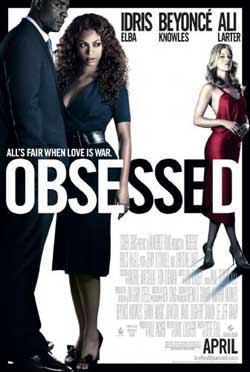 Derek Charles (Idris Elba) seems to have it all — including the perfect job and the perfect wife (Beyoncé Knowles). But his charmed life takes on an ugly tarnish when sexy office worker Lisa Sheridan (Ali Larter) sets out to seduce and destroy him. Now, it’s much more than a dangerous liaison; it’s a full-blown occupational hazard. Christine Lahti and Jerry O’Connell co-star in this Fatal Attraction-style thriller from director Steve Shill.

Obsessed is a 2009 thriller film starring Idris Elba, Beyoncé Knowles, Ali Larter, and Jerry O’Connell. It’s directed by Steve Shill. It’s about Derek Charles (Idris Elba) who gets a promotion at his job. Things are going great with his wife Sharon (Beyoncé Knowles) until an office temp (Lisa Sheridan, played by Ali Larter) shows up at his work and sets her eyes on him.

The movie opens up with Derek and Sharon happily moving into their new house with their son. The next scene shows Derek at his job. (He is the Executive Vice President of Gage Bendix.) He’s in the same elevator as Lisa. They chat and she tells him that she’s the office temp for the day. He tells her to watch out for Derek Charles, (himself) saying that he’s a real jerk. She falls for it and he leaves the elevator. She goes to see Derek’s asst. Patrick, (Matthew Humphreys) and as she eyes Derek, he says that he’s taken. Lisa then says that all the good ones are taken and Patrick says, “Or straight!” Later, Derek’s best friend and co-worker Ben (Jerry O’Connell) warns him that she only has eyes for him. Derek doesn’t believe it, but soon sees that he’s got it all wrong and it’s causing deadly trouble for everyone around him!

The movie is really good. The plot is rock solid and so is the cast. Ali Larter is so good you hate her. Idris Elba shines as the leading man. His acting makes him seem like the ideal man. Beyoncé Knowles is of course, a great actress and we hope to see her do more films. Jerry O’Connell is funny and at the same time seems like a good friend. Sure, he’s got “the mind”, but he’s still loyal. One thing though, who is this Matthew Humphreys and why haven’t we seen more of him?!

Although the movie is very good, there are some plot holes. Not to give anything away, but there is a scene where Derek gets a date rape drug put into his drink and is taken advantage of. They mention it one time and it’s not brought again. We felt like it was very important for him to discuss what had happened with someone about it and to report it, but he never did.

In fact the one major flaw in the movie is the story’s reliance on the ‘idiot plot’. Why doesn’t Derek tell his wife what happened at the Christmas party? Why doesn’t he report Lisa to human resources? Why doesn’t Sharon hit the panic button on her home security system that the director went through so much trouble to establish? If any of these questions are addressed in the film, their answers are unconvincing. The truth is the plot unfolds according to the filmmakers wishes because the characters make these choices devoid of common sense, and the result harms the otherwise solid film.

The only time he was about to tell his wife about everything was the exact moment her sister’s husband left her for someone else. She’s devastated and asks her husband if he’d ever do that to her. He says no and when she asks him what he had to tell her, he says it’s nothing. None of this came as a surprise to us.

Now on the flip side, perhaps this is a good thing. You have characters not doing exactly what they should be doing, and we the audience want to throttle them for it. Maybe this is one of the inherent values of a movie, to act as a surrogate public service message. Men can get harassed in the workplace, although it’s likely many don’t realize it’s happening to them. A movie like Obsessed just might serve to teach the warning signs to its male audience. It is much nicer to learn from other people’s mistakes after all.

Complaints aside, the movie works. It falls more under the psychological thriller umbrella than flat out horror movie, but being rooted in the vein of it-could-happen-to-you certainly does make the concept scary. We recommend it.