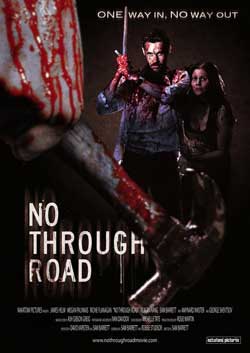 The serenity of another quiet evening is shattered for an amateur photographer when a desperate woman takes refuge in his humble suburban home. Reluctantly, he is pulled into a cat and mouse game with her pursuers. Only dawn will reveal the blood-soaked fallout of being alone in the middle of suburbia.

It pisses me off when I watch a movie and I should like it. All the main elements are in place but it’s missing that certain something that makes everything else come together. “No Through Road” is one of those movies. I love the underdog type revenge films, the mild mannered, quiet guy that has to defend whatever in order to save his life or maybe a wife, friends, family, etc. He has to defend them from drug dealers, or maybe rapists, maniac, I think you get the idea. This is what “No Through Road” is and on no level did it work for me. It was tough to sit through even though the story itself worked.

Richard (James Helm) is a quiet photographer that seems to be a bit on the dorky, timid side. After an afternoon of picturing taking and a minor confrontation with some overly enthusiastic football fans, he heads home, the house inherited from his family, and has a glass of wine. After hearing a noise in his closet, he finds Samantha (Megan Palinkas) hiding in there. Instead of throwing her out immediately and calling the police, he bandages her up and sends her on the way. Outside, three guys are waiting for Samantha, these are the ones she is hiding from because they had raped her. Instead of doing the right thing, Richard just pisses them off and the story is set in to motion when it is revealed that they aren’t going to leave quietly or without Samantha. If it means that some people have to die, then they will die.

What their unseen friend Eddie wants them to do, they will. I love that story and it is a chance for the underdog to prove to himself that he can overcome the odds. Damnit, I almost don’t want to write this review because this movie drove me nuts. This movie should have just been badass and it wasn’t. The screenplay by Sam Barrett and Robbie Studsor had all the right elements in place but the villains were never that threatening to me and our heroes were never really that likable or convincing for me to buy into everything. This is the part I am a bit confused on and maybe if I view the movie again (which I am not going to do) I can grasp this better but I am not sure if the characters were not fleshed out enough or if it was the actors who didn’t know where to take them. Only one of them was interesting, one of the assailants, Rob played by Keagan Kang. His character had an interesting twist and Kang himself was pretty convincing, the problem is that he was only a very minor character to the story. Sam Barrett, who also acted in, produced, and directed, may be to blame here. With so much responsibility he may have been stretching himself thin and the film suffered.

When it is time for Richard to get his revenge, I should have been bouncing in my seat, he is supposed to be that bad motherf*cker ready to kill and I just didn’t care. The violence wasn’t brutal enough and the acting didn’t make me care. There was a torture scene that had an interesting use for an air compressor that made me wince but other than that I just didn’t care. At times the acting was a bit tedious to deal with, especially Megan Palinkas and her junkie tirades were incredibly laughable.

Sam Barrett may be talented in some areas, the script was done well enough but he may need to find his niche and focus his talents in that general direction and maybe, at some point, I will forgive him for this film. On the production side, the film was shot and edited in a very professional manner but for me the problems rested with the actors. They never seemed to BE THE CHARACTERS. They were just actors trying to perform and it fell flat on its face. That’s just too bad because the story could have lent itself to a good revenge film but what I saw gave a headache from rolling my eyes at the screen so much.

Tags No Though Road