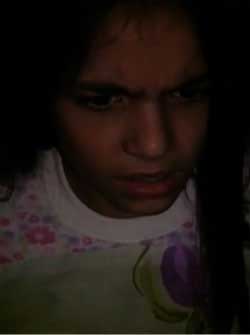 A girl is being haunted by the ghost of an abused child who used to occupy her room.

All right – this was interesting.

I received an email from a Brazilian writer whose short story had been made into a short film by a college there. She asked me to review her film, which I am happy to do. However, the film is (presumably) in Portuguese and has no subtitles. She assured me that the story was simple enough to follow, so that the language barrier would not be much of an issue. I did, in fact, enjoy the film – even though I never understood a word that was said – and can only write my review based upon what I can surmise.

My Bable Fish translation gives the title of the film (NO ESCURO) to be “In the Dark One,” which I will take at face value. The fact that the movie is in a foreign language really does not make that much of a difference since there is such strong imagery – including the wonderful use of a child’s journal drawn in crayon.

Let me say that I do have a weakness for ghost stories – which is essentially what this movie seems to be. I suppose it could be one of those stories where you never really find out exactly what the menace actually is – which has its own kind of satisfaction, as well.

Clocking in at exactly ten minutes (including credits), NO ESCURO is obviously a homespun horror film done on little or no budget. This does not detract from the show as a whole, the skill in the editing, or the use of a fairly stock yet well executed story of an afflicted child. I must commend the young actress playing Clara (our protagonist) for very much looking and behaving like exactly what she is – a little girl.

I love the editing and the uses of the reflections of our ghost, instead of seeing the ghost itself. Like so many other haunting stories, the background of our little-girl-ghost is a sad one. Coming from an abusive & neglectful home where she is also spurned by the cruelty of other neighborhood children – our ghost chose to end her own life by shooting herself. Most of this aspect of the story is very well told in the images of her journal (that gets a great deal of screen time). However, being a child at the time of her death does not stop her from having some rather nasty power in the afterlife.

Of particular note are the carefully placed camera angles, minimal editing, and sound / musical choices on this one. The special effects are next to nothing here, but are brilliantly placed – their judicious use are plenty to convey their meaning.

I can certainly say that I enjoyed this short – check it out on YouTube, and can be found under the search term “Curta-Metragem – No Escuro.”