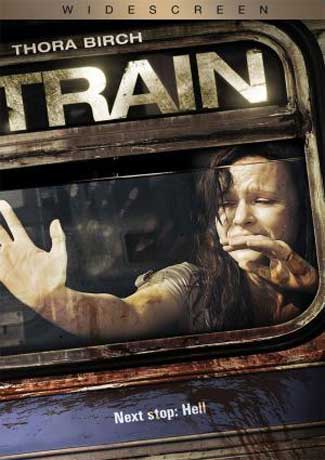 The film begins with of American athletes competing in Eastern Europe who are supposed to get on a train to continue the competition. And our group of people miss the train ’cause they went partying the night before. They get on a different train to catch up with their teammates and horror ensues. I researched real crimes that happen here in Eastern Europe and based it on that. This is as an intelligent horror film, It’s got gore and it’s got the stuff that makes it a horror movie, but it’s also got a clever story people will enjoy.

This film is a diamond in the rough for sure. Just when I thought it was going to be a cheap rip-off of Hostel or Turistas I was proven wrong. While it does hold its similarities to those two films it holds in own ground. I sat down ready to watch this film with an open mind but half expecting to be let down. I couldn’t of been more wrong as this film is bloody, gruesome, and fast paced.

Ok this movie starts off showing a wrestling match between the main girl and her bf taking on their opponents. Todd (Derek Magyar) takes down his opponent fairly fast enjoying in his victory for team USA. Alex (Thora Birch) doesn’t get as lucky as her opponent takes her down after a little struggle. Claire (Gloria Votsis) is her best friend through out the whole film.

Then we have all the characters in their locker rooms. Todd gets asked by his opponent that he beat no hard feeling and there is a party with girls down the road that night. Todd wasn’t really interested in it but his friend Sheldon (Kavan Reece) grabs the flier and makes the decision that they were all going there that night.The movie starts of a little slow but it sets ground for the movie to pick up later like when Alex see’s the train on the way to the party. The party consists of orgies, naked women, gambling, drugs, and drinking. Sounds like fun? Well it is all until they stay to late Todd gets into a fight with the man who invited him to the party and they all miss the morning train. So they had to confront their wrestling coach Harris (Todd Jensen) who wasn’t very pleased they snuck out.

Then Coach Harris was lucky enough to find another train going to the same destination of their next meet. But the woman that helped him out with finding the train is the same girl that he falls victim to shortly after. The team arrives on the train greeted by the conductor and his dirty henchman that point out their rooms. Nothing to weird to start off with as they settle in their train cars and gamble. Then the coach is taken against his will as he was seduced and tranquilized. Harris is taken into the room where all the experiments are happening through out the film. He has his tongue taken from him as he screams then he is shortly after killed.

This film is gruesome, most of us are used to it by now with the many Hostels and Saw films but it shines in its own light. Still had enough to make me cringe at parts which I don’t do much.

Then the team are drinking having fun then decided to play truth or dare, then we are more introduced to Willy (Gideon Emery) our second main character. They all do stupid harmless dares and truth like removing shirt or telling secrets. Then it gets to another harmless dare but has a turn for the worst. Todd is dared to run the length of the train wearing nothing except his briefs. He is ok until he gets to the very front of the train into a dark empty train car where he is stabbed and brought into a locked part of train. Yet again we are brought to the same execution room where Todd gets his eye removed from his skull. The kills aren’t the least bit corny done in a very well way.
After awhile Alex begins to worry where he is and they go looking for him. The conductor sees them wandering around being nosey and asks them to go back to their room. They go to their rooms but shortly after Sheldon leaves as he sees an attractive girl go into shower. While he was a peeping Tom he becomes the next victim, as the two cronies that helps them into their rooms, takes him to the train car. He has a special blood type so he is kept alive for awhile but not in will condition.

Then it starts to pick up as Alex, Willy, and Claire go investigate the train to try and find Todd and the coach. Claire isn’t so lucky and the conductor gives her to soldiers as for a trade to pass by a town. Alex and Willy find their friends in the train car and try to save them. With the butcher that removes the organs is in the room they didn’t have best chances.

The part of the film that changed my mind was when I seen the killing was all happening for organ harvesting. Sick children and women in a remote location were dying and needed parts. Unfortunately for our main characters they are caught up in the middle of this whole mess. For this is when I say the ending is unique as well as sweet revenge against the butcher.

The film I enjoyed it is not flawless as the ideas weren’t that original. Overall though it is worth your time checking it out. It’s getting 4/5 for being a solid gruesome hell of a ride on a “Train”.