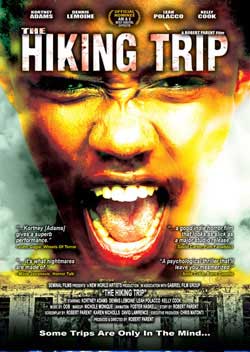 Tracy is pretty confused she has just recently waken up in a rehabilitation clinic where her only real contact is with a man’s voice and a camera to top it off she has no idea how she got there at all. The last thing Tracy remembers was going on a hiking trip with her roommate Stephanie and their friend Todd. When pushed to try remember more Tracy suddenly starts to have images of a robed and masked killer stalking her through a series of underground tunnels and images of her friends covered in blood; just what did happen on that hiking trip?

“How do you know the things you make me recall are real memories and not hallucinations?”

Robert Parent’s The Hiking Trip is a very strange and in some places confusing film, but in all of its confusion there is actually something very interesting going on. It starts with a dream sequence in which main character Tracy suddenly wakes in the back seat of a car driving down the road at night. Tracy sees her friends in the front seat and is shocked when neither of them answer her. She suddenly makes her way towards the front of the car and realizes that both of her friends are in fact both dead, one friend turns towards the camera and screams and I couldn’t help but get that same feeling I used to get watching movie trailers from the 1980’s. It was at that moment that I realized that yes the budget of The Hiking Trip wasn’t all that great but there was alot of heart behind it.

When The Hiking Trip starts back up Tracy wakes up to find herself in a rehabilitation clinic. She is immediately greeted when she awakens by a mans voice. The man introduces himself as Dr. Morgan, Tracy also soon notices the camera that watches her. The camera in a way becomes the eye of Dr. Morgan as the movie progresses, he never really is shown on camera which really does bring life to the inanimate object. Dr. Morgan informs Tracy that she has been in the institution for three months, and in fact she only has just recently woke up from a coma. To make things a little more twisted Dr. Morgan informs Tracy that she was in fact found in a cemetery, he is curious as to how exactly she was injured so he begins to get Tracy to talk.

Robert Parent does a great job during the flashback sequences of The Hiking Trip, it really is almost as if there are two films inside of one. When Tracy starts to talk the viewer is suddenly transported back to a hiking trip that Tracy her roommate Stephanie and their friend Todd are on. Todd apparently isn’t the best driver in the world having gotten the group lost quite a few times before they finally find their destination. The group of three gets out of the car and starts on what appears to be a normal nature hike. It is during this hike that things get strange when the group suddenly comes across a road that wasn’t listed on any of Todd’s maps. If the unknown road wasn’t strange enough things really start to pick up with the group suddenly finds an abandoned group of buildings.

The group of three eventually make their way up to one of the main buildings and get inside. While the three of them are exploring they discover that all of the buildings are actually connected by underground tunnels. Todd and Stephanie immediately want to explore the tunnels while Tracy doesn’t quite think that it is that great of an idea.

As Tracy describes scenes to Dr. Morgan the film actually goes back to these moments only to once again come back to the clinic with the camera watching Tracy. Dr. Morgan continues to push Tracy for answers when she goes back into the tunnels where the group of three some how get separated. While the three are apart from each other Tracy is suddenly attacked by an unseen force which knocks her unconscience. When Tracy comes to she realizes that she is alone in the tunnels and starts to attempt to leave, it is during this that she possibly comes across a dead body, Todds bloodstained back packed, and a masked stalker who taunts her with a machete.

It is around this point in The Hiking Trip that Robert Parent really does begin to play with his viewers. There are several sequences that are simply dream sequences there to confuse the viewer just as much as the character Tracy is. During one of these scenes Tracy gets out of the hospital and finds her way into the back seat of a nurses car. There is no dialogue at all during the entire sequence as we simply watch Tracy hidden in the car. When the nurse gets to a parking garage though things get extremely interesting for one her car wont start again and for another that masked stalker is suddenly back again with his machete to make some short work of the unlucky nurse! The police show up and Tracy screams covered in blood before once again waking up in the institution.

The FX on The Hiking Trip are mainly done via CGI which I personally am not that big of a fan of, however for the dreamlike environment that The Hiking Trip dwells in it is suitable. What make up FX there are in the film are also done quite well, though the red stuff isn’t on the screen a lot when it is it looks good.

By the end of The Hiking Trip the viewer is almost left just as confused as the character Tracy is, but also very entertained. Robert Parent has himself alot of fun playing with peoples ears and eyes during the coarse of the film and it definitely is worth the viewing for those who are tired of predictable independent horror.