Home | Do You Wanna See Something REALLY Scary?

Do You Wanna See Something REALLY Scary?

I have recently acquired the positively lethal combination of a Nintendo Wii (a wedding gift, thanks, Emily) and a NetFlix account.

While this has had a somewhat detrimental impact on my productivity, I have been able to catch up on a slew of movies that I had been wanting to see, but simply not gotten around to renting. My wife and I have been glued to the television for the past couple of days ticking films off of our “must see” lists and checking out a few of the classics that we loved from our childhoods. Last night, we came upon Paul Soulet’s GRACE. 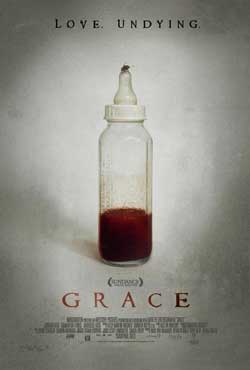 This isn’t a film review, so I’m not going to go some lengthy analysis of GRACE, but I will say that it creeped me out in a way I hadn’t been creeped out for a very long time and for that I LOVED IT! My wife, Sarah, also a horror writer, was equally impacted if not more so. When we retired for the evening, the conversation centered on what we had  just seen.

Now, there is a certain element of personal horror to GRACE that I, as a man, grasp differently than Sarah does. I won’t spoil it for you, but suffice it to say that I’m anatomically ill-equipped to TRULY empathize with a few scenes. As Sarah and I were lying in bed, discussing what we had just seen, I realized something about the way I write horror. I write to my own fears. Some writers write to the fears of others, getting inside the heads of their audiences and seeing what switches they can flip. GRACE is a perfect example of this kind of writing, as I am pretty sure that Paul Solet has never been pregnant, nor given birth to such an….unusual creature. Of course, he can imagine it. The first component to writing is imagination.  He probably did a bit of research while working on the script. You write what you know. However I doubt that he can draw on his own experiences or fears DIRECTLY to tell this kind of story…

…and for that I envy him.

While talking to Sarah, I confessed as much to myself as to her, that I write mostly about my own fears. When I tackle a story about zombies, its because zombies scare the crap out of me. The idea of a human being reduced to an unthinking, unstoppable creature that hungers for the flesh of its own kind hits me in a very guttural, primal place. The idea of becoming something like that scares me even more. Sure, I know its made up. That’s why its safe. But when you think about it a good portion of the allure of horror stories is the ability to feel fear in a safe environment, isn’t it?

I am also a product of the 20th century. Wilderness scares the bejesus out of me. If I have the choice of a 2 am  stroll through a Chicago ghetto, or taking the same stroll on a deserted country road, I will take my chances in the urban setting any day of the week and twice on Sunday. Gangbangers might mug you. Maybe they’ll even shoot you, but have you ever seen Deliverance? Texas Chainsaw Massacre? 2001 Maniacs? Backwoods bumpkins are way scarier. Out in the woods, removed from civilization, there is no one to hear you scream, no 911 to call for help. You are removed from the safety net that society has crafted for  you, and left to the mercy of whomever should find you. To me, that’s a horrifying thought.

So when I write, I try to filter my own fears onto the paper. My goal is to tell you a story that leads you through the parts of my mind that I find most frightening or disturbing. I want to show you what terrifies me. I want it to terrify you too. I want to lead you into the darkest areas of my mind and ask, “Do you wanna see something REALLY scary?”

When I watch or read horror I want to be introduced to new fears. I want the chance to experience those things that I would normally never even think about being afraid of. I want to take the writer’s hand and let them guide me down the darkest corridors of their mind and show me what lurks there. All storytelling is about sharing in experiences. I happen to love the experience of fear, revulsion, and disgust. I like being unsettled.

On that note: hats off to Paul Solet (and dozens of other horror filmmakers and storytellers, far too numerous to mention here) for taking me somewhere I never thought I’d go. Thank you for showing me something REALLY scary. Here’s hoping I can return the favor.