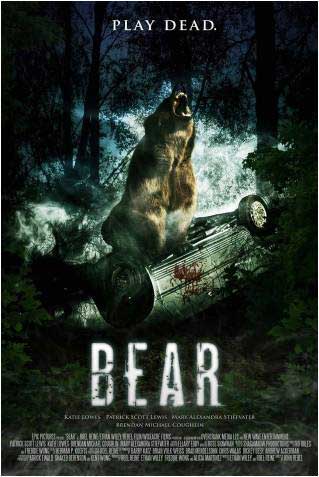 Two young couples are driving through a remote forest when their car breaks down. When a run-in with a curious grizzly bear ends up with the bear being shot to death, the bear’s mate arrives on the scene and vengefully attacks their van. The couples are trapped inside the disabled car and must come up with clever ways to survive. As they battle the surprisingly intelligent creature, and contemplate their uncertain fate, secrets begin to emerge that threaten to tear the group apart before the bear does.

Never have I been so torn over a silly movie but I’ll be damned, a no-budget thriller, of sorts, has me completely undecided on whether this should be negative or positive. And to top it off, the film has to be about a grizzly bear with a mind for vengeance against those who killed the one he loved. No joke, that is the basic premise of “Bear” from first time director John Rebel and writers Ethan Wiley (who wrote one of my favorite 80’s horror comedies “House”), and Roel Reine (who directed one of my favorite Steven Seagal of the last few years “Pistol Whipped”). So I will try my best to make sense here and hopefully by the end of this review I will have formed a solid opinion.

Nick (Brendan Coughlin) and his brother Sam (Patrick Scott Lewis) have their differences. Nick wants to be a rock star while Sam is the one who likes to show his success off to everyone even though things with his wife Liz (Marie Alexandra Stiefvater) are strained when they aren’t  having much luck reproducing. Nick is newly sober and has a new girlfriend Christine (Katie Lowes) that hides her drinking from him.  In a mini-van together they take a shortcut to get to the steakhouse for dinner. The van gets a flat and just as they fix it, they’re attacked by a bear. Sam pulls out some heat and blows the bear away. Just when they think they are safe, the fallen bears’ mate appears and he is pissed, ready to get back at them for everything they have done.

When I first started watching the film I couldn’t help but laugh. I laughed out loud several times since it was just completely ridiculous. At one point, it almost seemed like the bear was having a flashback to the moment his love was needlessly slaughtered before his eyes. I almost thought I was watching a parody. The characters annoyed me and I could have cared less about them. Then somewhere during the halfway mark, the actors kicked things up a notch and things began to turn interesting. The dynamic between the actors works and actually holds the film together. I’m not sure the balance the between the character story and the bear story works. It takes too long for the characters to become interesting and some of the bear’s actions were so totally ludicrous that it was hard to take the proceedings seriously. 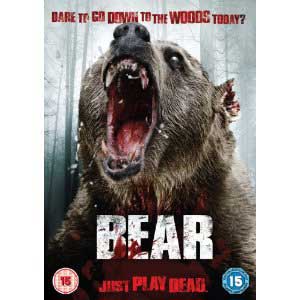 On a technical note, the lighting for the majority of the film is absolutely HORRIBLE!! It was difficult to tell what was going on half the time and to add insult to injury, some terrible angles, shaky camera work, and the lack of lighting makes for a difficult viewing experience. I think that there was a good film hiding in here but the inexperience of the director and lack of funds may be the sole reason that this film is forgettable. With a bit more experience, money, and a bit more edge this could have been a cult classic.

The actors carry this film and if you’re a young filmmaker looking for fresh faces then maybe this is a film you should seek out. Patrick Scott Lewis is a scene stealer and has a great moment when his temper flares and he begins cursing the bear. Hilarious scene and that is the moment I began to enjoy the performances.

“Bear” is not a very good film, its production just felt sloppy to me. The story and script were strong enough, just executed poorly. I guess I will have to commend the filmmakers for at least trying. Better luck next time. If your budget grows, keep your actors and writers. Maybe the planets will align and you will find a character piece to showcase their talents. Sorry for the lack of pictures. Do a search for “Bear” and tell me what kind of pictures you end up with.