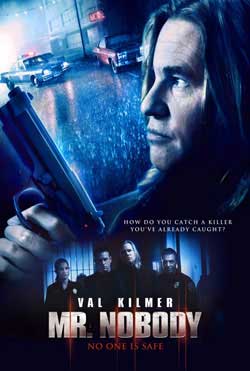 On the Christmas Eve in a small town, a stranger enters in the precinct and tells the Desk Sergeant Gulloy that he had murdered six people. Detective Alexander Black arrests the man in a cell and Deputy Jerry Pine, Deputy Jane Hollow, Deputy Toby Sherwood and Deputy Jack Hawkins are not able to identify him since the stranger does not have fingerprints. They call him Mr. Nobody and Deputy Hawkins recalls that he resembles the haired drifter that they had arrested and tortured one year ago, when the daughter of Detective Black had vanished. Along the night, while Mr. Nobody confesses each murder and whistles Lacrimosa from Mozart’s Requiem, each deputy dies. Sooner Detective Black discovers that Mr. Nobody is a revengeful spirit that has come to kill them for what they did to the drifter one year ago and they are doomed to dieREVIEW:

I had no idea what to expect when I sat down to watch this movie. I had high hopes as I do with every horror movie I watch. And this one did not disappoint at the beginning. The mood was creepy, lighting and atmosphere of a dark and rainy night a nice touch, and a man named Mr. Nobody (Val Kilmer),dressed in black, walking nonchalantly into a police station claiming that he committed a murder. Not one, but six. Great start. And for the first half of the movie, the tension and creepiness remain intact, but then the second half starts and it all goes down from there.

It’s Christmas Eve and a nasty storm is raging outside. Cut off at the police station are five officers and Detective Alexander Black played by Dylan Neal (Chupacabra Terror). A year ago Detective Black’s little girl, Mary, was killed by an unidentified man. In a rush of judgment he arrests a drifter and with the help of the five officers drags him into a cell where they beat him up trying to get him to confess. They do such a great job that they end up putting him in a coma. Flash forward to the present day where the drifter is still in a coma and it is found out that another man was convicted of the crime as Mary’s locket was found on his person. Oops, looks like they beat up the wrong guy. Can anybody say revenge film?

Seems our Mr. Nobody is a complete mystery. He has no fingerprints and on his mug shots his face doesn’t show up. He also has a tendency towards quoting from the Bible and whistling classical music. Could this be our drifter from the past? Suffice it to say things do not go well for our five officers as one by one they meet their untimely demise.

This movie had a ton of potential. The idea, while not wholly original, was pretty good. As stated above it started out very well. But unfortunately a lot of the time it was as if the director of the movie felt his audience didn’t have the capability to put two and two together. We are shown a flashback of the officers and Detective Black beating the crap out of the drifter in the cell. But once is not enough. Every single time we see someone getting killed, we are shown the flashback again. And again. And again. You get the idea. It absolutely kills the pacing. In one excruciatingly long sequence we see an officer suffocated in a police car. And it just goes on and on and on. Honestly, you could have trimmed say ten minutes from the film and although it would have clocked in at eighty minutes, it would have been very lean and tight. It was as if the filmmakers thought they had to reach the magic ninety minute mark to satisfy some quota.

At times the soundtrack was just way off. Almost a rock and roll guitar riffing and it was completely out of place with what was happening on the screen. And I know it might sound weird to say this but in a way there was too much blood. It just didn’t fit with how the movie was set up. There is a great kill scene with a shovel and in this case the over the top method works. But a lot of the time it just seemed they were throwing blood against the walls during a kill just cuz. You’d have to see it to understand what I mean.

Problem is I can’t really recommend it. Okay, if you can catch it for free, it’s not bad. It does have its moments and Val Kilmer and Dylan Neal do good jobs portraying their respective characters. You just hate to see a great premise and start ruined by the time the credits roll.