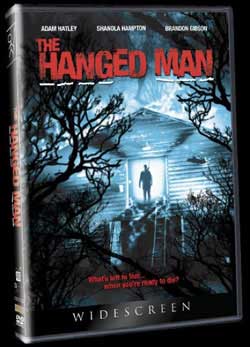 In this grim psychological thriller, a group of outcasts (Robbyn Leigh, Tom Jay Jones, Brandon Gibson, Adam Hatley, Shanola Hampton and Cliff Weissman) who met in an online chat room decide to commit mass suicide in an abandoned barn. But when the one who offered up the solution doesn’t show, they’re left to face a terrifying fate. Soon, bodies begin dropping like lost connections, and it seems someone hasn’t been telling the truth.

When life is deemed to unbearable, human beings tend to make hasty decisions on how to deal with the pain of a stressful life. The choice of an end to an existence that leads to nothing but pain and misfortune feels somewhat relieving; however, there are always the hassles of being talked out of or not being able to fully go through with the act of ending one’s life. In Neil H. Weiss’s “The Hanged Man,” a group of strangers that met online in a chat room for support for people who want to end their life convene at an abandoned barn to do the deed, but end up learning more about why they are still living versus contributing to their end.

“The Hanged Man” begins with snapshots of the different characters typing away to each other in a chat room, talking about how the life is unbearable enough that the only way to solve their pain is to end their lives. There is another cut shot, a foreshadowing scene of the main character, whose screen name is SoCo(Adam Hatley), playing a game of Russian Roulette with another fellow chat room visitor Flash(Brandon Gibson.) The gun goes off beginning the movie to the day of reckoning, where everyone is coming together at the abandoned farmhouse.

One by one, the different characters that had never met before enter the scene. Along with the angst-driven SoCo, and forward cowpoke dressing Flash, there is a young blonde who is familiar with the farm scene that goes by Spaceshot(Robbyn Leigh). Also, there is the investment banker that drives a sports car, LT56(Cliff Weissman), pink-shirted and calm mannered Miles(Tom Jay Jones), and the quiet X-Factor(Shanola Hampton.) The six characters introduce each other, and wonder where the ringleader with the supposed answer is, as he goes by the codename “Dwarfstar.” Eager to end their lives, the characters are very edgy, and not welcome to befriending eachother. Suddenly, a sheriff (Ralph Hatley) in an old car pulls up, and the group panics. 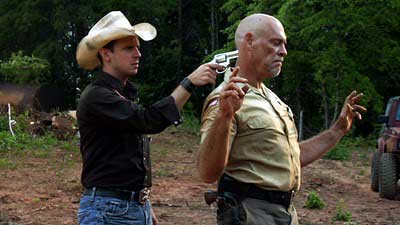 The last thing everyone wants is for this sheriff to find out with they are here, and everyone panics in presence of authority. In panic, a quick decision is made that leaves the sheriff out cold, and now the group must decide what to do with a beat up cop on top of their motive of killing themselves. This haunts the members, as they learn more about each other, and enter strange character studies that lead to lies and deceit within the group. From questioned sexuality to secret motives of being at the scene of the group suicide, plot twists and turns lead to a shocking conclusion that surprises even the most attentive viewer.

“The Hanged Man” is a reference to the Tarot Cards used by psychics to read one’s fortune, and predict one’s life. Interesting enough, as described on the website, each character in the movie is represented by the different Tarot Card persona chosen for them. There is very little blood and gore associated with the movie, and most can see that the movie is more of a supernatural thriller than a blood-soaked horror flick. The last five minutes of the film are rushed, but is quick to the point explaining why everything happened as the way it did in the film, This can be upsetting to the viewer, after they spend all their time getting to know all the characters and being sucked into the whole psychological mind game as well. 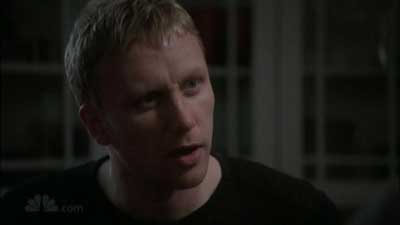 The fates of a group of fellow people that are ready to end their lives are given in Neil H. Weiss’s “The Hanged Man.” When one is willing to end their own life, not much can stand between their attempt and commitment to following through with the death of themselves.