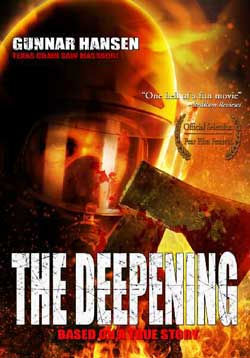 THE DEEPENING follows a troubled New York fireman who suffers from post traumatic stress disorder after working the tragic terrorist events of 9-11. In search of a fresh start, he relocates to a small fire department in a quiet rural town where he seeks treatment from Doctor Chambers for his recurring nightmares. The bad dreams, however, do not subside. Instead, they turn into a terrifying reality as the population of the town begins to sharply decrease. (from The Deepening official MySpace page at www.myspace.com/thedeepening)

Following in the footsteps of true life stories of firemen suffering post traumatic stress syndrome from working on Ground Zero after the September 11th terrorist attacks, Ted Alderman and Jim O’Rear made The Deepening to introduce a new concept of a slasher film. From what we always knew to be a savior in a firefighter gets flipped into a killing role in this low budget flick with plenty of blood and breasts to make any horror fan satisfied. The Deepening promotes the fact that it is based on a true story, and stars Texas Chainsaw Massacre’s Gunnar Hansen as Dr. Chambers.

The film starts off with a couple camping in the middle of a forest. An axe carrying man is shown in the forest stalking the couple, and interrupts their happy camping by slicing them up. A hand is shown being cut off, and blood splatters into the fire in which they were cutting food. Soon after this, a radio airplay of the 9-11 tragedy is played while a black screen is shown, and then sets the scene for the introduction of the main protagonist Ted (Ted Alderman.) He is shown being antagonized by his fellow new firefighting squad, and is being analyzed because of his sudden move from big city New York to the backwoods of New York State.

His only friend that has his back, Jim (Jim O’Rear), gives him hope of friendship and invites him to pick up prospective women who are only looking to score. They pick up two women using the fire truck, and both men go their separate ways to make sexual advances on the women. Jim goes upstairs, while Ted and his date venture outside. While Jim is having sex, he hears Ted and date yelling and Ted returns covered in blood.

After this kill, more and more acquaintances of Ted and Jim are brutally murdered. Jim’s date Sabrina (Maria Kil) is shown being stabbed in the middle of her chest in a steamy shower sequence, and afterwards Ted is shown having nightmares from his haunting psychologist Dr. Chambers (Gunnar Hansen.) Jim and Ted go to the bar, and the firefighting squad provokes an argument with Ted that finally brings him out of his quietness and into a tough guy fighter. Ted’s personality completely changes for the rest of the movie, as Jim continues his ways of finding girls to hook up with. After Jim is accused of killing the two women and a fellow firefighter, Jim and Ted plan to stalk Nick (Jess Zimmerman), who they think is the killer.

After finding a bloody axe in the shed, Ted and Jim are convinced that Nick is the killer but choose not to tell on him. Jim separates from Ted to confide in his ex-girlfriend Barbara (Debbie Rochon.) After telling her he is on the run from the cops, Barbara lets him spend the night and he successfully gets into her pants also. Jim realizes he is on his own when Barbara is murdered, and Ted is nowhere to be found. Jim’s problems only worsen as the cops keep blaming him for the murders, and Ted’s frequent nightmares turn into reality of killing sprees.

The concept of a firefighter, who a person could always usually count on, as a killer is what made The Deepening stand out above other slasher flicks. There is a killing scene in which the hose from the fire truck is inserted into a man’s mouth, and his head explodes from pressure that is not shown. However, his brain is shown oozing out afterwards of his head to add some gore value to the film. The nighttime shots were grainy, especially during the beginning scene with the two campers. Also, the scenes in which Jim hooks up with his various women were always accompanied by music that sounded straight from a p*rn flick. The sex scenes are very provocative, showing full frontal female nudity and just shy of showing actual penetration. Even though Gunnar Hansen is highlighted to be in the film, he seemed to be in very few scenes with a small speaking role.

The Deepening is an interesting spin off of the traditional psycho killer that is terrorizing everyday citizens in a low-crime small town. Even though one is forced to live through a big scale tragedy as 9-11, the memories of mass death can affect a person for a lifetime. The Deepening also teaches the lesson that you can run from problems, but you can’t hide from your past unless you chose to deal with it from the initial start.