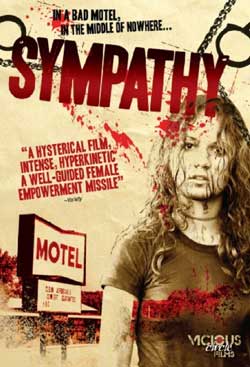 Trip is having a really bad night. The evening started with Trip robbing a bank and then taking a teenage girl named Sara hostage. You would think that things would start to be bad after Trip shoots Sara in the shoulder, but that was before escaped convict Dennis suddenly shows up at their motel room. It is after Dennis gets ahold of the gun that things start to get really interesting.

“Anything you do to her from now on I do to you!”
Andrew Moorman’s Sympathy is a great example of a low budget thriller. The film boasts a small cast (only three people), great special FX for the budget and one location. The film starts in a motel room and pretty much spends its entire running time there. Sympathy also doesn’t allow gore or shock to sell it instead the film focuses on some great dialogue between the three who each have their own lies that they are hiding.

Like I said up there Sympathy starts by showing a man named Trip simply throwing a girl (Sara) into a seedy motel room. In only a few minutes the viewer learns that Trip has just robbed a band and has decided to take Sara as a hostage. After Trip gets Sara into the room he proceeds to handcuff her to the bed using military issue handcuffs that can not be picked, this gets brought up a few times. The handcuffs are not the only thing that gets brought up alot, Sara is more than capable of using her legs and feet like a monkey. In the first few minutes of the film Sara is shown actually getting ahold of a phone and starting to dial with her toes before Trip suddenly sees her and rips the phone out of the wall. Sara also uses her monkey feet to attempt to get the key for the handcuffs (she ends up swallowing it so that Trip will have to leave her behind) and in a later scene she actually uses her feet to pull a knife out of a wall!

Marina Shtelen definitely shows the viewer some of her flexibility during these scenes! The two characters share some dialogue briefly before Trip suddenly pushes a pillow on top of Sara’s face then points his gun and fires. A few seconds after Trip pulls away the pillow Sara suddenly springs to life screaming about how Trip just shot her in the shoulder. Trip does something he should have done at the beginning of the film when Sara first started giving him problems and poisons the young girl into an early slumber. Trip leaves briefly in order to get some supplies and when he returns Sympathy suddenly gets extremely interesting. 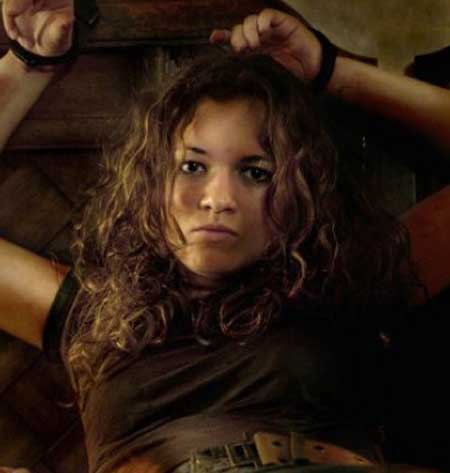 Trip walks into the motel room to immediately meet up with Dennis, an escaped convict who still has on his uniform and handcuffs. Dennis immediately takes charge of the only gun and in doing so takes charge of the entire situation before anyone can do anything. He leaves Sara handcuffed to the bed and he puts Trip into the bathroom where he cannot escape.

Through out Sympathy there is alot of conversation between the characters in which the viewer learns who really is the dangerous ones and who is harmless. Trip seriously does come off as one of the dumbest criminals in the history of the game in many of his scenes. Dennis however is just as dangerous as the viewer first thought he was, he has spent ten years behind bars and he explains this several times during the coarse of the film.

Really the thing that sells Sympathy though are the small sequences. In one sequence Trip is now handcuffed on the bed beside Sara and the two of them are trying to find a way to escape. Sara uses her monkey feet to pull Dennis’s knife out of the wall and proceeds to attempt to pick the lock on Trip’s handcuff’s. The blood that splashes on the two of their faces lets the viewer know that Sara is doing more than just trying to pick a lock, it is only after Sara instructs Trip to pull his hand free that we realize that Sara has cut off Trip’s thumb so that his hand will slide through the cuffs. While Trip flails around the room screaming about his missing thumb Sara puts it into her mouth and swallows it as well! The red stuff is limited in the film but during sequences like this one it is poured on the screen. Sara also has the uncanny knack of being accidentally hurt alot in the coarse of the movie, not only does she get shot in the shoulder she also gets stabbed in the side near the climax of the film.

Andrew Moorman really has done a good job with what budget he had with Sympathy. The cast of unknown actors really do handle their roles very well, though Sara does come off as annoying in a few of the beginning sequences. The film really does only take place in the motel room (I am not gonna give away anything close to the ending but it is worth waiting for!) and Moorman captures the tension between his cast with various camera angles and just fantastic dialogue.Sympathy is a refreshing breath of fresh air from the trenches that can be known as independent genre cinema and fans of dialogue heavy suspense are sure to enjoy this one.