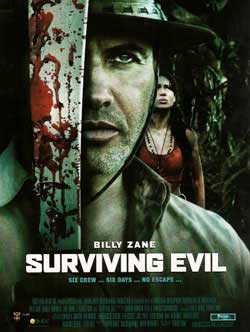 A TV documentary crew arrive on a remote island in the Philippines to film a survival special. Their back-to-the-wild adventure proves to be more terrifying than they ever could have imagined

“Surviving Evil” is a film that was a pleasant surprise, mostly. Terence Daw has crafted a film, while not all that original or even close to being classic, manages to capture your attention and actually have some fun. Now, the film stars Billy Zane, who’s star has fallen for whatever reason, but he seems to relish in the fun that can be had while working in a genre film. His performance isn’t nearly as incredible as his role in “Tales from the Crypt: Demon Knight” but I like to think he saw some potential in filmmaker Daw who has shown some serious promise with the film.

The story doesn’t get much simpler than this: A documentary film crew lands on an island in the Philippines to film a survival special only to find that the island holds a secret and they have to band together in order to survive the evil that awaits them. That’s it! There is a hint of “Cannibal Holocaust” in here mixed with something like maybe “Fright Night”. Not the best analogy but somewhat close. A group of nasty vampire-like cannibals that lurk in the tree tops wait for their chance to devour the crew with their eyes focused on the pregnant Phoebe (Christina Cole).

Seb (Billy Zane) is the show’s host and also the troops fearless leader. We also spend time with the local Chill (Natalie Mendoza of “The Descent” fame) who is trying to learn the ropes with the rest of the crew. Things go bump in the night and dead babies fall into their laps. Sound fun yet? The local guide Joey (Joel Torre) fills them in on legends and myths, that of the aswang, and gets greedy looking for treasure. With this mix, the movie is bound to be fun.

Terence Daw wrote and directed the film so any of the film’s faults should fall on his shoulders. I think he deserves some kudos here since he really tried to develop a film that doesn’t just relish in the splatter but also build relationships and character within the core group. So many horror films these days are completely soulless. Most the time we could care less about who lives or who dies. It’s a nice change of pace to care a little. The characterization isn’t deep and they are pretty much stereotyped but the attempt is there and it makes all the difference.

For my money, what made the film stand out to me was the complete use of practical effects. No CGI, a throwback to what made me fall in love with horror films to begin with. The make-up team was comprised of a group of unknowns and they did an incredible job. When the creatures finally make an appearance, I have to admit that I thought they looked amazing. If I had any complaint at all about the creatures was that there wasn’t enough screen time for them. Work like that deserves to be shown off and I really hope the team assembled sticks together to work another day. The films main fault for me was its inability to sustain itself for the first thirty to forty minutes. It takes too long for things to get moving after the opening and was a major problem for me.

“Surviving Evil” is ridiculous but it is actually a cut above the rest, but just a little. There was a real effort here by Daw to make the best film he could and mostly succeeds. It seemed that the film was written with a specific budget in mind and was able to deliver on the said budget. He never once tried to over step his bounds and made a safe horror film with plenty of blood, awesome looking creatures, and the most important ingredient, characters that actually have souls. People we are able to root for and people that feel and look human. One solid effort that I recommend.