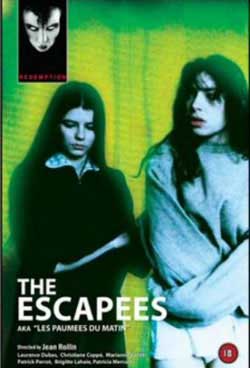 The Escapees is a previously unobtainable re-release by Jean Rollin, and like most of his other movies such as The Shiver of the Vampires, Requiem for a Vampire, The Demoniacs, Fascination, The Night of the Hunted, Lips of Blood, and The Living Dead Girl, there is excellent cinematography and atmosphere. The Escapees tells the story of a two girls (Laurence Dubas and Christiane Coppé) who break out of a mental institution and go on the run. Along the way they meet up with naked Brigitte Lahaie and all sorts of inexplicable and sexiness ensues. A combination of insane asylums, straight jackets, rebels, lesbian love affairs and murder, how much better can it get?

The film centers around two young girls, Brigitte and Marie, who escape from an insane asylum located in a remote French countryside. Marie (Christiane Coppe)is withdrawn and unwilling to communicate to the world. Brigitte (Laurence Dubas) is violent and aggressive. Brigitte is placed into a straight jacket for bad behavior. But Marie is forced to interact when Brigitte convinces her to set her free. Brigitte goes on to persuade Marie to lend her some clothes so she can escape. Marie, not wanting to be alone, decides to tag along with the getaway. The duo finds refuge in a troupe of exotic dancers, seeming more like a side show in a traveling circus, where they meet a plethora of strange characters along the way.

The girls escapade soon moves from the countryside to a more urban scene. It’s there that they meet an African woman and join her troupe of exotic dancers. Once they make it to the docks, they form their own cabaret show in a dockside scrap yard. The girls meet and become best friends with a tomboy named Sophie (Marianne Valiot), and together they plan to stowaway aboard a ship on which Sophie’s boyfriend Pierott (Patrick Perrot) is a sailor, heading for a wonderful new life on some far away island.

Expect a somewhat lengthy middle section, where we see Louise Dhour, a Rollin favorite, appear as a fortune teller. But once Brigitte Lahaie appears as an evil temptress, the film gets moving again. Be prepared for a finale full of lesbian love, killing, and machine guns shoot outs!

If you’re looking for the typical Rollin style of lesbian vampires, horror, and eroticism, this is not the film to watch, but with that being said, it has enough of Rollin’s signature style to make it worth the effort. And let me remind you, audiences react to Rollin’s imagery, which tends to stick in your mind long after the fadeout.

Rollin’s movies frequently tell conventional horror stories and Rollin tells his stories in the most unconventional of ways. His movies contain elements of horror cinema, but Rollin insists he does not make horror films. Not surprisingly, because his movies tend to defy the expectations of audiences, reactions to his movies can be volatile.

The works of Jean Rollin have been difficult if not altogether impossible to see in America. So for those of you that can appreciate contrasts in style and subject matter and can appreciate Rollin’s wildly idiosyncratic and non-conformist vision, I would highly recommend taking advantage of this rare opportunity to enjoy another one of his works.