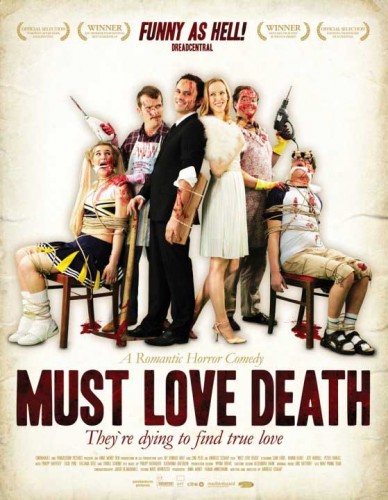 Disappointed by love, suicidal Norman arranges to meet some like-minded people. But when he arrives at the meeting the alleged suicides turn out to be unscrupulous killers looking for a willing victim. A comical and macabre fight against death begins.

“Must Love Death” is an incredibly uneven film. From the opening frames, everything jumps around in a way that I’m not sure quite worked for what it was they were trying to do with this story. Director and writer Andreas Schaap, was trying to make a hybrid film that was part romantic comedy and part torture horror. The results here are mixed. On the one hand, I was digging bits, then a moment later I was shaking my head.  Even in its messing pacing, a decent first time feature film emerges for the director that is on the right track.

Norman (Sami Loris) is fed up with love. He has had his heart broken too many times and is ready to end it all. He is almost run down by Jennifer (Manon Kahle) who offers to take him dinner to make up for her negligence. The chemistry is evident right away and things seem to be moving in the right direction until Norman finds out that she is still somewhat dating tv star Foxx (Philip Rafferty) which sends him over the edge. He answers an ad for a chance to participate in a group suicide, only to find out that they are ruthless killers who are working on a reality game show called Torture or No Torture. As truths are revealed to Jennifer, Norman has to play along in this sick game after he realizes he may have something left to live for.

The romantic element of the film is played up most during the first twenty to thirty minutes of the film and I have to admit that I was really buying in to it. Loris and Kahle had a real chemistry on screen and both are very likable and flawed characters. I want to see them end up together right away and the actors were perfect for their roles. They managed to sell the film to me, even with the issues I had with it.

For me, the humor just wasn’t working for me. Not sure if they were going for belly laughs, I chuckled a couple of times, it just seemed that most of it was forced. These genres can be mixed, just felt that the balance between romance, horror, and comedy was off. Maybe I have grown jaded over the years watching film after film, but the torture was never brutal or graphic enough for me. It is possible that the inclusion of the humor dulled it down a bit, just thought that it would have had more of an impact if they had gone a bit more over the top.

The production used their locations effectively and technically looked pretty damn nice. Some nice sound work during the torture scenes and music was used to enhance several scenes. A very professional looking film and hope to see director Schaap grow as a filmmaker.

“Must Love Death” is flawed. There are very few perfect films in my eyes, with flaws and all, it still manages to entertain. If anything, I would like to see this film be a launching pad for its director and stars. I’m pretty sure that this film was some sort of German American co-production. The film was shot in English though there were many actors attempting (or not attempting) to hide their accents. Peter Farkas and Jeff Burrell also deserve mentions as the two demented torturing partners. They were an interesting pair and were fun in their roles. I think this is gonna end up being one of those films where the majority of reviews will label it hit or miss. I will say it’s both. When the film misses, they are near misses. Certain moments didn’t work well or the pacing was off. When it hits, there is fun to be had. Just keep in mind that part of what hits is the romance factor, not something I am used to enjoying. Did I mention a cameo by Jorg Buttgereit, director of Nekromantic?