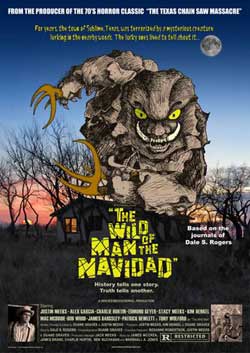 From the journals of Dale S. Rogers comes a true story about what happens when you bite the hand that feeds you. Of course it could be the other way around you see he has bit the hand of the one that he feeds, and well now it’s pretty darn angry.

From the beginning of The Wild Man of the Navidad a viewer can instantly recognize they are about to watch a very retro film. I say retro in a very good way here, the film is set in the 1970’s and the look and feel of the film also feel like it is from the 70’s, not really any surprise because one can see in the opening credits that Kim Henkel (The Texas Chainsaw Massacre) is involved in the production. Before the credits begin to roll onto the screen we are told that we are about to witness a true story, you see the film is based on the journals of Dale S. Rogers.

It doesn’t take directors Justin Meeks (who also stars in the film as Dale S. Rogers) and Duane Graves very long to start laying down the ground work for the rest of the film. It is obviously hunting season in the small town of Sublime Texas. Sublime appears at first glance to be full of good old boys, moonshine makers and a crooked police force. The local tavern of the town also seems to function as the town hall, everyone from the town meets up there to discuss business, some even bringing their children; in one of the more disturbing scenes near the beginning of the film a father makes fun of his son for not being able to finish a deer off and takes him into the pub to let the other tavern goers poke fun at his “sissy son”.

Meeks and Graves very quickly introduce us to the main character Dale S. Rogers; in one of the first scenes with Dale he loses his job to the local drunk Karl. Losing his job however is the least of his worries, Dale’s wife is crippled after a car wreck and she spends most of the film sitting in a wheelchair and drooling on herself. The husband and wife also have hired a man named Mario who is a Mexican immigrant, he is supposed to help out around the house and care for Dale’s sick wife. Mario’s type of care however is quite twisted. In several scenes he is shown sexually torturing the helpless woman who sits only in her wheelchair.

Dale S. Rogers lives on a rather large ranch, and it’s pretty well known throughout the town that Dale and his family have closed the ranch off to hunters for years and believe me when I tell you there is a very good reason. The reason for the closing of the ranch of course is the wild man from the films title. Every night Dale and Mario put a raw and skinned rabbit on a plate, Dale then proceeds to sit the plate on his porch and close his door. Dale then stands by the door while Mario stands back with Dale’s wife. The group of three listens in horror as they hear something outside devouring the sacrificial meal; as if in tribute when Dale opens the door he finds that the creature has left him a token of appreciation. This feeding ritual has obviously occurred for some time, the viewer sees as Dale puts the token away there are many similar ones in the cabinet.

Dale’s life however is really in a mess now that he has lost his job; he no longer has a source of income to help take care of his wives disability. The love for his wife leaves him really no other option than to open his land back up for the hunting season. Mario immediately thinks that it is a bad idea; there has been a true between the wild man and Dale’s family for years.

The first man to get the chance to hunt on the forbidden property is of course Karl; yes the same guy who stole Dale’s job at the beginning of the movie. Not only though did Karl steal Dale’s job, he isn’t even paying him cash to hunt on the property; instead he just brings Dale a crate full of bottles of moonshine. Just to show you what kind of person Karl is he takes one of the bottles of moonshine out of the crate after giving it to Dale saying that he is going to use it on his hunt.

Karl prowls the wilderness with his rifle drinking from his bottle of moonshine (seems real safe!), when he hears a strange growling sound. The sound isn’t all though, he sees a large man like form moving through the brush. Karl fires his gun sure that he hit what he saw, he runs towards the form only to find that what he shot is long gone.

That night as Dale and Mario do their nightly feeding ritual we can hear that the creature is angered more than usual. When Dale opens the door he finds random objects thrown all on top of the now empty plate. Mario informs Dale that there is no token which is a very bad sign, especially with how angry the creature sounded outside!

The Wild Man of the Navidad is what I consider to be “hillbilly horror”, and it is done very well. There were multiple times during viewing where I was convinced that the film had actually been hidden in a vault somewhere since the 1970’s. There really isn’t much of a back story for any of Sublimes denizens, even the wild man, but what you do see will leave you not really wanting to know much more. Most of the folks in the film are actually not actors either, which leads to a certain realism when viewing, though their acting is very limited. The people of Sublime however aren’t just bad to look at; they are down right ugly on the inside.

The main subject of the film, the wild man himself, is portrayed also very well. For the first half of the movie he really isn’t even visible. We the viewers are left only hearing his growls and seeing a rather large form moving through the prairie brush; and yes this does lead to several decent scares.

The soundtrack to the film also helps set the tone for the next 86 minutes. In-between the retro country we are also treated to loud threatening noises, not unlike what viewers heard in Tobe Hoopers The Texas Chainsaw Massacre (again didn’t I mention above that Kim Henkel was involved), which was a “hillbilly horror” classic in my opinion.

Most of the deaths in the film however are pretty laughable for the jaded viewer. The wild man simply thrashes his arms around a lot while we get treated to some close ups of the victims screaming faces while they are being hosed with spurts of the red stuff. If you are looking for a gory film I suggest looking somewhere else, although there is a pinch of the gory stuff in there you just have to wait for it. However if you do like your horror southern fried with a slide of the sleazy 1970’s then The Wild Man of the Navidad is right up your alley.

Tags The Wild Man of The Navidad