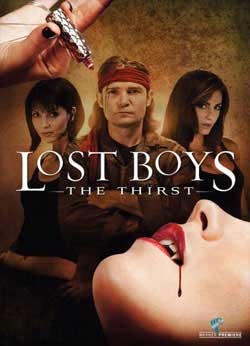 The thankless life of a vampire hunter has taken its toll on Edgar Frog. After losing best friend and fellow vamp fighter…

QUICK FIX:
A suckmonkey with a taste for global vampire domination is handing out a new designer drug called “The Thirst” to sweaty, smelly, dancing kids at raves. Only problem is, it’s not as cool or happy-go-lucky as Ecstasy – it’s really vampire blood. With an army of undead bloodsuckers growing by the hour and willing to do their master’s bidding and take over the world, it’s not looking too bright for us humans. And when the writer of a series of insipid TWILIGHT-style teen vampire romance novels finds her brother has gone MIA since the last rave, she goes to the only person in the world who can save her brother and the human race – Edgar Fucking Frog!!!

“Well, perhaps I’ve made a serious mistake in coming to you.” – Gwen Lieber

RAMBLINGS:
I can’t tell you how happy I am right now!! THE LOST BOYS is such a staple in my household – of course, my wife and I both saw it in theaters several times back in the day when we were teens – but both my daughter AND son (he usually doesn’t like horror movies at all) are huge fans of it now. There for awhile, my 8-year old junior horror geek in training would watch it every single night before she went to bed. It has become as much of a part of our regular viewing ritual as ARMY OF DARKNESS and BIG TROUBLE IN LITTLE CHINA.

So you know how happy and frothing at the mouth I was when I heard that they were finally making a sequel so many years later and that Feldman was reprising his role as the awesome monster basher Edgar Frog. And the fact that Kiefer Sutherland’s (who my lil girl has a ginormous crush on – Kiefer, that is) half brother Angus was playing the lead vamp that time around. After all, I’d given up long ago on the proposed direct sequel they were calling THE LOST GIRLS back then, as well as the rumored prequel that would follow how David came to lead the pack back in the early 1900’s. This was finally the coolness I had been waiting for, right?

But Part 2, known as LOST BOYS: THE TRIBE, with the exception of a really cool opening sequence with Tom Savini and some hilarious Feldman lines (“Who ordered the stake?”), THE TRIBE left me feeling really empty inside. They tried too hard to remake the magic of the first one, even going as far as having Michael & Starr’s kids be at the forefront that time, and there was too little Frog too late. Sure, I’m a Feldman fan from decades ago, so there will always be a soft spot in my heart for the 2nd one, but not more than once or twice a year.

So when I first heard about THE THIRST, you can imagine that I was basically “meh” about the whole thing. Even with a really cool-looking trailer to go with it, I had decided I wasn’t falling for the banana in the tailpipe yet again. But there I was, quite coincidentally I swear, in the Hell on Earth known as Wal-Mart, on the DVD’s release date. There it was, staring at me on the shelf next to the newly released 30 DAYS OF NIGHT: DARK DAYS and it was calling to me, almost taunting me…just daring me to walk away. I tried to walk away, I really did. But you know how that goes. I stopped, took a deep breath, and told myself that dammit, I love vampires and this is no lightweight, pussified, PG-13 TWATLIGHT sparkly teen romance horsesh*t – this is R-rated sex & blood & violence & humor – these are brutal vamps on a brutal planet. So yeah, I bought both of them!

Man, am I glad I did…THE THIRST is everything to me that THE TRIBE wasn’t. There’s much more Edgar Frog, there’s the return of Alan Frog, there’s tributes to the late Corey Haim all over the damn place, and there’s a much better story this time around. Where THE TRIBE tried too much to be a continuation/remake of the original and follow too many rules set 20 years before it, THE THIRST is, from start to finish, a balls-out spin-off letting the Frog Bros shine brighter than Edward on a sunny day.

Some of the acting will grate on your nerves, I’m sure – this was a South-African production, and I’m fairly sure that much of the cast (even the ones in lead roles) hadn’t had much experience in front of the camera. I didn’t mind, as I think it added to the atmosphere, but thought I’d warn you anyway as I’m more forgiving than most when it comes to that. But, Feldman and Newlander as The Frogs still had the awesome chemistry that we first witnessed in 1987 – yeah, we believe they’re brothers now more than ever – and they bring the kind of camaraderie to the table that Vin Diesel knows in his heart Paul Walker failed to bring with him when they got fast & furious together.

One side note though – Feldman is not, I repeat NOT, overacting in this flick. Watch the original again before you watch this one – he is simply harnessing the spirit of how Edgar Frog would act as an adult after all the sh*t he’s seen in the last 20-plus years, and playing him basically the same way he played him as a teenager all those years ago. To me, it’s spot-on f*cking perfect for this type of movie.

LAST WORDS:
Bottom line – fans of the original THE LOST BOYS should not go into this movie expecting the same kind of flick, cuz this ain’t it. This is a spin-off to showcase Feldman & Newlander, plain and simple. So if you’re wanting to embrace your inner Frog, go buy this flick now if you haven’t already. Matter of fact, just buy this damn movie anyway – it’s f*cking awesome and one of the best horror/comedies I’ve seen this year. If this sucker is a hit and has huge sales, I have a feeling that “Franchise” is the word of the day and that the Frog Bros’ monster-fighting escapades have only just begun. And that’s more than alright with me!! 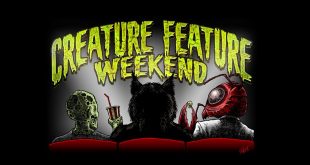