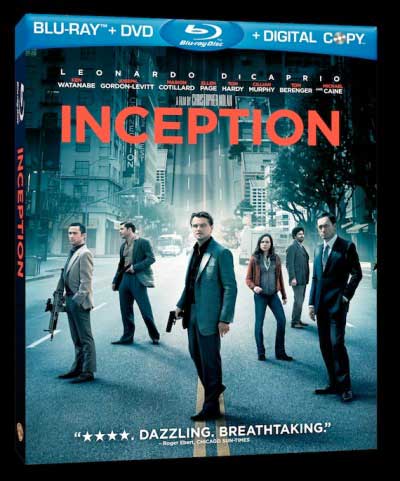 Even though Christopher Nolan’s Inception left theaters just a short time ago, we already have the DVD and Blu-ray release date information available at our fingertips. On December 7th, 2010, get ready for one of the best films of 2010 to expand the new release shelves at your local Blockbuster when Inception arrives and does it’s brain bending justice. And even though the film did $800 million (that’s all?!?) worldwide, the questions fan may still have about the movie will kind of be left in lingo as the DVD/Blu-ray special features don’t exactly give you all the ins and outs either. But here’s a break down of what you will see on the back of the box.

* Dreams: Cinema of the Subconscious: taking some of the most fascinating and cutting-edge dream research to-date on lucid dreaming, top scientists make the case that the dream world is not an altered state of consciousness, but a fully functional parallel reality.
* Inception: The Cobol Job: now in full animation and motion, check out this comic prologue to see how Cobb, Arthur, and Nash came to be enlisted by Cobol Engineering and perform an extraction on Saito.
* 5.1 Soundtrack selections from Hans Zimmer’s score
* Conceptual art gallery
* Promotional art archive
* Trailers and TV spots
* BD-Live
* Project Somnacin: Confidential Files: get access to the highly secure files that reveal the inception of the dream-share technology.

According to Blu-ray.com, “Starting November 15, consumers can receive exclusive, never-before-seen Inception content on their camera-enabled mobile devices via Inception Snap Tags that will be placed on various Inception advertising materials. Consumers only have to snap a photo of the Snap Tag with their camera phones and send the photo via MMS to 95871 (for AT&T, Verizon, and Alltel customers) or as an email to inception@snaptag.mobi to get a reward. Different rewards will be offered on a weekly basis until December 7, when the final reward offered will be tied to the Blu-ray Combo Pack.”

The home video release will feature Warner Bros. fantastic Maximum Movie Mode, aptly called Extraction Mode that will give in-movie insights regarding the overall design of pivotal scenes. The rest of the supplements will give you a peek into the mind of Christopher Nolan. Kinda cool eh?