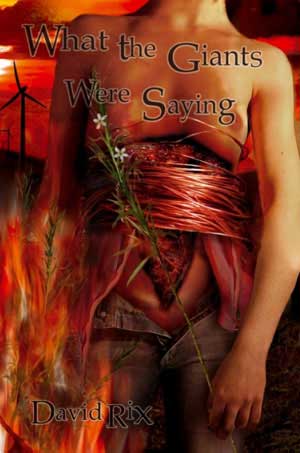 “When pain doesn’t matter, do we cease to fear it? Does it just become another sensation? I wonder. Can you experience pain that goes somehow completely beyond pain – beyond a world where pain has meaning? It is almost impossible to describe. Pain as liquid? Pain as a flower?”

What is art? Further, what is its purpose? How about its relationship to the artist? Come to think of it, what place does the artist have amongst this nonsense anyways? These aren’t exactly new questions and anyone who has, willingly or un-, taken any length of classes on literature, art, poetry, music or intra-vaginal insertion has been faced with numerous ruminations on the subject. Nonetheless, these are the questions that David Rix is Dealing with in both the title novella and the included shorter, and quite frankly much better, work “Red Fire,” with a focus on what the pursuit of art does to the artist.

The title work is the story of Don, a landscape artist that has lost all touch with and affection for his own art. There’s nothing to it; it isn’t original or powerful enough to him. These raw reproductions of bland scenery have left him feeling empty. He hates his own work, and what it has come to mean about himself and his life so much that he has effectively cut off all ties to the rest of the world, including his girlfriend. Then one day he finds himself stranded in the middle of a wind farm, entranced by the turbines and their song, his head filled with bizarre and brutal permutations of reality. When a heavily tattooed acolyte of these same giants takes him under her wing, he is forced to decide where to go from there with his life and art.

The second tale, “Red fire”, is as simultaneously similar and different as opposing sides of a coin. This is the story of Cal, who has become bored with the stories that are tattooed across Feather’s skin and has decided to make them a bit more open-ended. Is his need to make her art into his own consuming him as much as he is consuming her? Of course, we all know the answer to that.

Both of these tales carry the feel of prime Splatterpunk, obsessed with art that goes beyond art. Experience beyond experience. Pain beyond pain. They are desperate with the yearning for the sublime in an existence of desensitization. What separates them is the light in which they show this obsession: Is it a force of expression that allows us greater access to our own internal truth, a doorway into ourself if only we can transcend the mundane preconceptions of a restricted society? Or is it an addiction, a fire that burns us whole from the inside out while destroying everything we love as well? According to David, it can be both. The main difference seems to lie in issues of consent and force, an equally fitting analogy for BDSM, further tying these to the Splat movement.

Now, that is all well and good, but is this at all worth buying? Personally, I found the “What the Giants…” to be a tad pretentious and too long in the tooth for my tastes without the emotional connection I need to have a story truly pop for me. It tends to come across like a rather heavy handed philosophical treatise, and by “heavy handed” I mean that he did everything except write his message in neon paint on a sledgehammer before mercilessly bludgeoning the reader. Does he really believe that all of us are so stupid that we need that many over-the top explicit connections to Don Quixote de la Mancha when the main character is named Don and he is this obsessed with windmills that he regularly refers to as giants? If you need that, then the reference means nothing to you anyways. Also, I’m not sure what I think about the whole “victimless violence” aspect.

On the other hand, “Red Fire” is tight, powerful and mean spirited without coming across as jaded. Maybe it is just my inner cynic responding more to the more negative of the tales or my love for really sharp, punchy assaults on the senses but I adored the hell out of this particular story. While didn’t particularly like Cal, I could relate to his mania and could feel the collapse of everything he wanted his work to be bringing about his own collapse. Oddly, at least to me, is that the afterword and the title of the collection suggest that “Red Fire” was tacked on more to show the roots of “What the Giants Were Saying.” The old cliche that your first impulse is almost always the right one is certainly applicable here.

That leaves the issue of my support in a difficult place since I certainly would not recommend tossing down $12.75 for the main story and as good as “Red Fire” is, it is only 38 pages long. I guess the answer depends on the amount of disposable income you have available. If Eibonvale ever puts it in an anthology, you can sure as hell bet I’d be all over that.