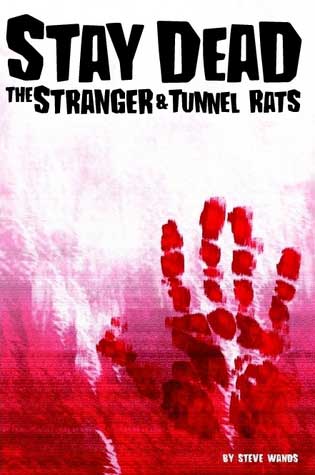 “They had the sickness. At least that’s what some people were calling it, as if a bottle of cough syrup would set you right again. Jennifer—unsure of how she had the strength to do it—managed to restrain her family. Her father was heavily duct-taped to his favorite chair. He was neatly wrapped in a reclined position. On the love seat were her mother and younger brother, both of whom were strapped down with tape and bungee cords. Jennifer sat cuddled up with a blanket on the larger couch, her eyes rimmed with tears. They sat in front of the television, which remained off due to the power being out. Otherwise, it was a normal movie night at the Benz household, well, that and the fact that (with the exception of Jennifer) they had all been dead days ago.”

I’ve mentioned too many times how flooded the horror market is with stories about zombies. I’ve also mentioned that this glut has not been a necessarily bad thing for the genre. Too much in that vein means that authors have to put forth something really special for it to be worth the attention and cash of even the most voracious devourer of the living dead word and many of them have been up to the challenge. The problem is that there simply isn’t room for anything below par.

Steve makes it very clear during the introduction that these stories and the Stay Dead series as a whole is a labor of love to him. It has taken several forms over the years, having originated as an idea for a graphic novel, before arriving in my mailbox as a quite attractively bound chapbook. The series as a whole has a very simple basis: a look into the lives of the denizens of Titan City during and after the outbreak of a plague that causes the dead to rise up and go all munchy on the flesh of the living. “The Stranger” tells us of a young girl who barely escapes death at the hands of the undead into the care of a seemingly nice old couple. “Tunnel Rats” follows a homeless man during his attempt to flee Titan City amidst the beginning of the outbreak.

Based on the strength of the two above tales, I would be tempted to warn you all to stay away from this book as if it carried the very plague it discusses. I have a hard time referring to “Stranger” as a story at all since the synopsis I offered above pretty much covers everything that happens. “Rats” at least possesses something vaguely resembling a plot, if the central conflict is Bark’s attempt to get outta Dodge, but that is so clichéd and dull that I’m dozing off typing it. To make matters worse, the descriptions betray the stories’ roots in graphic format, reading almost exactly like panel descriptions: short, to the point, but without connective tissue. They lack the flow as well as verve needed to make them pop. The closest to a nice thing I can say about these two tales is that Steve has created some intriguing characters, but he doesn’t do anything interesting with them.

That said, stay with me for a moment.

The interesting thing comes in the flash fiction that is stuffed into the back as filler. Both “A Day with the Dead” and “Last Broadcast” are somber reflections on guilt and regret that positively shine with possibility. Sure, the descriptions still need work but both have a strong emotional core that resonated with me. “Last Broadcast”, with a bit more patience in drawing out the tale and developing the characters, has the potential to be positively crushing. Unfortunately, they still have much more promise than bite.

I wouldn’t feel right recommending that anyone purchase this, but if you opt for the free download then a skip to the back is at least worth the couple minutes of time.