The Children of a Lesser Corn: Making Beware! Children at Play! – Part Two 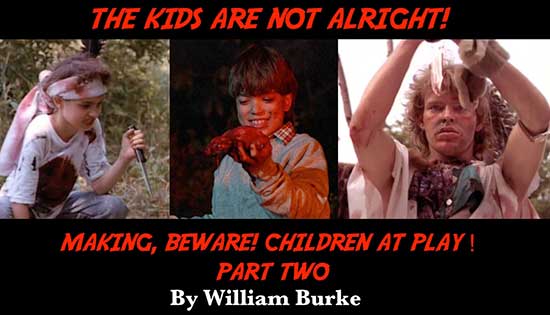 Welcome back to the penultimate chapter of the Beware Children at Play saga, where we finally dive into the nuts and bolts of a zero-budget production.

Beware Children at Play’s child actors were cast via newspaper ads and through some local modeling agencies. Some of the kids were surprisingly good, and I hope they look back on their movie experience fondly, as opposed to sharing it in therapy sessions. It was fun to watch them interact. Crushes developed, little hearts were broken, and scary stories swapped. On one of our night shoots the lights attracted a bunch of bats. Of course, being kids, they all convinced themselves that the bats would swoop down, attack, and give them all rabies. It made the evening very challenging.

The adult actors were hit and miss, though that wasn’t always the performers’ fault. One of the roles was an elderly psychic brought in to help find the missing children. When no geriatric actress could be found, twenty-something Stephanie Jaworski stepped in. Sadly, nobody adjusted the dialogue to match her age, so her performance has a weird, early John Water’s movie vibe. Rich Hamilton was a solid actor who gave a sincere performance, despite playing one of the slowest witted peace officers in cinema history.

The film’s meager budget directly impacted the actresses in an unflattering way. On most low budget shoots, the cast provides their own wardrobe, giving them control over their appearance. Every New York actor had their lawyer suit, working man’s outfit and nightclub ensemble on standby, so they’d be ready for anything. But Beware’s gory special effects mandated doubles or triples on their wardrobe, meaning it all had to be bought.

Producer Ellen Wedner was saddled with dressing the cast for about twenty dollars. Lauren Cloud’s reporter character, Dale Hawthorne, appears to be wearing a belted St. Patrick’s Day tablecloth, while Robin Lilly’s Cleo was dressed from Dollarama’s signature ‘Rural Despair’ collection. Stephanie Jaworski was decked out in a weird spangled moo-moo thing, adding an extra dash of bizarro to her already eccentric performance. Ellen worked hard, doing the work of ten people, but the results could still be kind of hilarious. Ironically, Ellen was a snappy dresser, so draping the ladies in such dowdy ensembles must have driven her bananas.

Ellen also created the wardrobe for the cannibal children. It was an artful blend of kid’s clothes bought from discount stores on Canal Street, combined with rags, bits of fur, dishcloths, and anything else she could stitch on. The clothes were then splashed with coffee or tea, giving them a dirty, tattered look. We shot over the course of a year, so by the end of production most of the dirt was real. But the clothes lasted, and nobody got pink eye or E. coli, so… mission accomplished!

Like many low budget horror films Beware was packed with gory murders requiring special effects makeup. The film gods must have been smiling down on us when Mark Dolson and Mark Kwiatek came aboard. This dynamic duo had previously created the gore effects for the shot on tape opus, Video Violence. They performed miracles on Beware on a meager budget of about five hundred dollars. During the week Mark Dolson ran a New Jersey magic shop and he incorporated a lot of sleight of hand tricks into the film’s notorious climax. He was also licensed to use bullet squibs, which came in handy. I don’t think we used any on the kids though—we were crazy… not stupid.

They also created the partially eaten body of farmer Braun’s wife, which our intrepid reporter finds crucified in a field. As originally written, the scene had crows pecking at her face. But birds are expensive, so we cleverly substituted rats. I purchased two ill-tempered rodents at a downtown pet shop and brought them to set. Unfortunately, the rats’ feet couldn’t grip onto the fake body, so they kept falling off. In desperation I tried keeping them in place with monofilament tied to their legs. Rats don’t like that! One of them clamped onto my finger so hard I couldn’t shake it loose. Eventually it let go, taking a big hunk of skin with it. I was bleeding like a stuck pig, so some of the blood you see on the fake body is mine. Truth be told, I got what I deserved. We finished that scene and I used a combo of ice and super glue to close up the wound. How butch is that? At wrap we discovered that both rats had chewed through their cardboard prison and scampered off into the woods. I hope that they, and their ten thousand offspring lived long and happy lives in New Jersey.

Other effects, like the bible salesman being sliced in half still hold up pretty well. Whatever they lacked technically they made up for in sheer outrageousness.

The psychic’s death scene didn’t require many special effects, but still wound up needing some low budget movie finagling. In that scene, a young couple making out in their car hears the psychic’s screams and comes running. For some reason we needed to reshoot pieces of the amorous couple, but the actress proved unavailable. To conceal her absence, we only see the girl’s bare legs waving in the air, indicating that the couple got really busy, really fast. I think those were actually Ellen’s legs jiggling around. What a trouper! 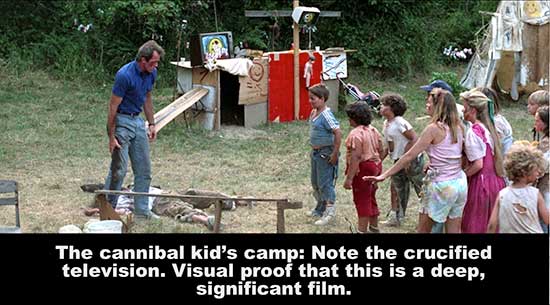 The cannibal children’s camp was the most ambitious set. It was cobbled together over several weekends from loads of old pallets, broken tents and whatever scrap lumber could be nailed together. There are also some nifty bits of art direction, including TV sets with smile faces painted on, a crucified stuffed rabbit and even an old Styrofoam angel my mom was throwing away. We managed to build a serviceable set for no money and I got a great suntan in the process, because sunblock hadn’t been invented back in 1985.

The camp’s centerpiece was the skeletal, crucified remains of the cult leader’s father. This prop ignited some local chaos when a group of hikers stumbled across our encampment. They called the police, claiming they’d stumbled onto a Manson family style cult. After a few hours of satanic panic, the property owners managed to calm down the local sheriffs. The cops didn’t hold a grudge and (I think) actually loaned us a police car, or at least the beacon lights off one. 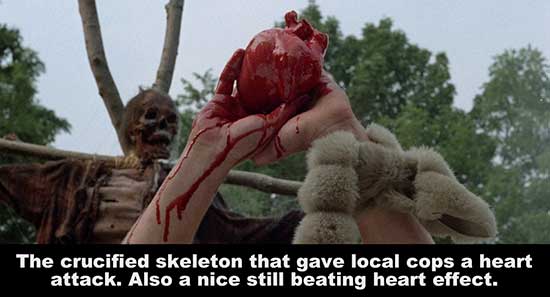 One of the shacks doubled as a smoke house full of suspended body parts. Looking at the film now I’m surprised at just how gruesome that scene is. That’s also the site of a rape scene that still seems unnecessary, but I guess tossing in some nudity was part of the package. Originally, the victim was supposed to be Lori Tirgarth’s character, but due to the protracted shooting schedule, she’d moved to Los Angeles before it was shot. Robin Lilly’s character, Cleo, was substituted. That character swap meant her onscreen children are actually watching the rape occur. It’s just creepy and wrong in a hundred ways.

And if you’re looking for some high-octane monster action check out my latest novel DOMINANT SPECIES, published by Severed Press.