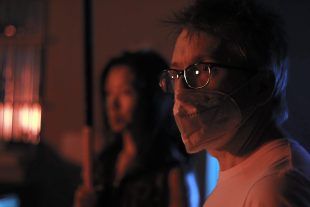 Fortune and glory, and damn have I been disappointed. No, from a very young age I knew I was not cut out for a regular life and a job-type job. I was always fascinated by occupations that were outside of the norm. For a long time when I was really young, I wanted to be a bounty hunter/stunt man like The Fall Guy. But, I don’t exactly have the physicality for that, so it pretty much had to be in the arts. For a short time after highschool I pursued music. I was the frontman in a funk/rock band called Smak Dab, but that didn’t really work out. No, movies were just always my thing. Some kids liked sports or to raise hell, I was a movie kid running around with a VHS camera. But growing up in the 80’s and 90’s in Fort Wayne IN. it never seemed like a viable option to direct movies. It wasn’t til I was in college, studying film and talking to industry professionals that I saw a real road into it. I made my first movie the summer I graduated college, RISE OF THE UNDEAD. It was 2003 and we shot it for 4 or 5000 dollars on mini DV. Found distribution for it, and I haven’t stopped making movies since.

From script–to–screen, how close did Craving come to your original vision?

For the most part, all the words in the script are on screen, so there’s that. But seriously, when you’re making movies at very low budget level, things never go 100 percent how you planned them on the page. Rolling with the punches is part of the indie filmmaker gig, and that’s a skillset I have in spades. Craving is also a pretty old script. I wrote the original draft around 2010 or something like that. It went through many variations over the years, but the main components have remained intact. Herion Addicts, hold up in a rural location. One of them hiding a hideous secret. Mysterious strangers outside trying to kill them… and of course the monster stuff. Out of everything I’d say the monster stuff is really close to the first draft I wrote over a decade ago. The biggest change is probably the location. It started out as a factory that made rubber parts. Later it became a design studio. Probably a few other things, then I finally landed on the bar idea. I’d say of all the movies I’ve directed this one is probably closest to the original vision. I suppose the biggest thing I couldn’t shoot exactly how I planned was the opening scene. From the very beginning it had been my intention to play the whole opening sequence in oner, one long dolly or steadicam shot. But with our time, budget and location constraints that just wasn’t possible. That said, I am pretty damn happy with what we got. There was also originally a bit more action taking place just outside of the bar, but again the budget and location restrictions kinda put a kibosh on that. Biggest positive change was I had originally conceived of a completely different types of actors for the roles of WILL, HUNTER, and CARl. It was very fortunate that we got the actors we did and they brought awesome things to the roles that I had not planned for.

First day was my favorite. I took a four year sabbatical from narrative films after my last horror movie DEATHDAY. That one took a lot out of me. In the meantime, I made a large slate of documentary films, which I love doing, but I don’t have the same passion for the docs as I do for narratives. Being back on a set and directing actors again after a four year hiatus was really magical. To be honest, in the months leading up to Craving, I was a little burned out on filmmaking in general. But after a few seconds on this set, it felt like it was all new again. Craving really re-ignited my passion for making movies. I can’t wait for the next one, which I’m prepping now.

When usually asked this question, you’ll many times see directors and cast talking about how fun the blood stuff is… but honestly that stuff kinda sucks in the moment. It’s messy, it’s uncomfortable. It takes a long time to set up and if something goes wrong it takes a long time to clean up and do it again. Plus, if you’re renting the location, there’s always the worry of damaging it or upsetting the owners. No, for me it was probably the simplest scene we shot. It was a car scene with Ashley Undercuffler and AL Gomez. It was just them sitting there and talking. Actors, a very small crew and the director. We did it on a pick up day and had all the time in the world to shoot it. We were able to really dig in and get into the nuances of the performances beat by beat, which is something that you can’t always do on a full set day, with special effects, guns, blood and monsters running around. Plus it was the only scene in the movie I shot myself (to the DP’s chagrin). I haven’t really been behind the camera like that in many years and I enjoyed that.

What is the biggest obstacle you faced while making Craving?

Not putting amityville in front of the title.
No… Money and time is the stock answer and it’s probably true. But I’m gonna get a little personal here and dig a little deeper. The biggest problem was most likely my anxiety. I’m a super anxious guy. And that sometimes causes me to make rash or impetuous decisions. Mostly in pre-production. Don’t get me wrong, once the cameras are rolling and things are moving, I’m 100 percent in the moment and engaged. But the days, months, hours leading up to that can be tough for me. I struggle to not make fear based decisions, but I’m not always successful. However, on this movie, I probably had the best producer support system I’ve ever had and they really got me through.

Again, it was probably on the first day. I was very nervous about being able to handle such a large cast. A lot of our movie takes place in a bar, with 9 chief characters. That’s a lot of people to cover and block. And like I mentioned before it had been a few years since I had really worked with actors on a narrative film. And never this many characters at once where they all have dialog. But we got on set, and it just kinda clicked into place… I’ve directed over 20 features prior to CRAVING. But it was this moment where all the imposter syndrome faded away and I felt like a true, worthy director, at least for the day.

Runner up would be shooting the transformation sequence and the FX stuff that comes after. I’ve worked with Robert Bravo (BravoFX) on many movies. But it had been a few years and it was really cool to see how much he had grown both as an SFX ARTIST and as a person. Because the transformation moves were so specific, I allowed him to direct the person that was transforming and he turned out to be quite the director. It was really neat to watch.

How do you get a film to stand out in the crowd in today’s entertainment landscape?

That’s tough. I think a big part of it is putting yourself in the audience’s shoes. Of course it’s my vision, but these days I really try to make the movies first for the audience, then for me. Also, I think it’s cool to try to do things a little differently. A lot of indie horror goes one of two ways… it’s either super serious and maybe a little mean. Or straight up tongue and cheek silly. On Craving, it was about taking this MONSTER MOVIE and injecting it with a ton of straight-faced pathos. Which can be tough for some filmmakers. In my opinion, It’s much harder, especially in horror, to be vulnerable and wear your heart on your sleeve than to be nihilistic. And Craving is a very emotional movie. It’s brutal, and features some not so nice people, but it’s not mean spirited in tone. There’s a few jokes but it’s not overly jokey and silly. It’s also sort of a period piece, set in the 90’s ,which I don’t see a ton of horror movies doing these days. You see a lot of 80’s stuff, but not as much 90’s. On top of all that, we have a really cool monster. Our monster is much cooler than most indies at this level.

All the typical filmmaker that folks of my age site, Craven, Argento, Romero, Carpenter is prolly my favorite. But I have to give a special shout out to Tarantino. Reservoir Dogs is really the movie where I learned what a director really was. I was a big movie buff and I knew actors and directors names. I could tell you who directed what, but it wasn’t til I heard him talking about other directors that it really all clicked for me and made me realize it was what I really wanted to do. And while I’m not the biggest fan of his post 90’s work, I really admire the way Kevin Smith continues to navigate the business of independent film and retain control and ownership of so much of his stuff. And like them or not, I think he almost always makes movies from the heart.

80’s. Carpenter and Romero’s 80’s output is legendary. I was super into the slasher craze. And I loved the little oddball stuff that would pop up.
Terror Vision. The stuff. Chud. Critters. Chopping Mall. Night of the Creeps. Night of the Comet, Motel Hell. Silent Night Deadly Night. My Bloody Valentine. It was a really cool decade for horror. But ironically, my own work is a little more 90’s in style, which I suppose is because it’s a little more reflective of my late teens and early 20’s.

I’m just gonna keep making movies. I’m not really qualified for anything else. Craving is the first part in a Crime/monster trilogy. The movies aren’t really connected except for the fact that they all feature criminals having to deal with monsters. But the characters, settings, tones and monsters themselves will all be completely different. Each movie also gets progressively bigger in scope and budget. In addition to that, I’ll continue to keep knocking out documentaries and working on my marketing and distribution youtube channel. www.youtube.com/jhorton? 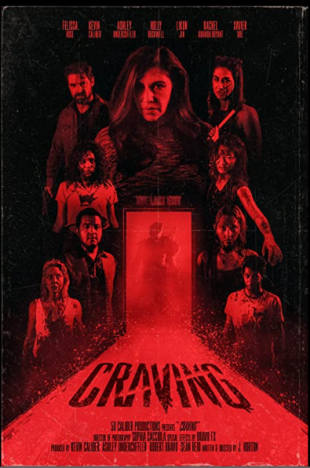