Exclusive Interview: Matthew Martino (The Legend of the Dark Clown) 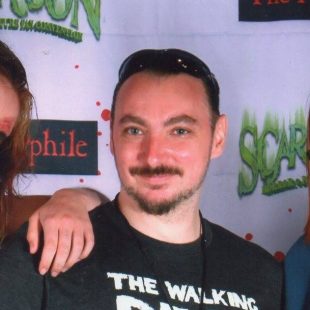 Amazon: The Legend of the Dark Clown

What is the synopsis for The Legend of the Dark Clown?

The Legend of the Dark Clown centers around Jitters, a young clown who cannot afford to pay back his student loans from clown college, so he resorts to a life of crime. He joins up with a group called the Killer Clown Mafia that requires you to kill to become a full member. This leads Jitters to commit horrible acts in the name of trying to earn a living. In the process, he becomes a dark legend.

What inspired you to write this comic?

I worked at a haunted house as an evil clown called Plasto the Angry Used Clown Car Salesmen. He was a jerk who would make other people tell him jokes to make him laugh. At some point I blurted out that this was the only job a clown could get in this economy. I have student loans from clown college to pay off. And the story became about what lengths a clown might go in a bad economy to make a living.

What sets this apart from other comics of the same theme?

Jitters is quite unique among evil clowns. He more like Walter White from Breaking Bad then Pennywise from IT. He’s not just evil and sadistic. Rather, he is motivated by noble intentions that go very badly. He desperately wants to be a birthday clown. However, the world just won’t let him. His decent into evil is slow and methodical as his life spirals deeper out of his control.

What was the most difficult aspect of writing The Legend of the Dark Clown?

I wrote the first draft in about two weeks. When I have an idea, it just flows. I am often haunted by characters and story lines until I write then down. I will go over them in my head time and time again until I make them real by writing the story. The biggest challenge is finding time to write. I often have long breaks from work so when that happens, I block off time to write. Otherwise, I start and stop to much, I lose momentum and the story goes nowhere.

Do you have a favorite page or graphic from this comic?

The introduction of Sleezeball the Clown was great. When I saw how our artist Tyler Crane portrayed that I knew we had the right tone. He is a very talented but raw artist. He is descriptive in everything he draws, but his style is just a bit loose and crazy. He is colorful and invokes emotions with his palette. His action scenes are dynamic and show motion on a static page. I think he has a great future as an artist.

Why are people afraid of clowns?

If you look for early commercials of Ronald McDonald, like the second ever commercial with him in it, he is seen literally bribing a child with food and telling him to ignore the advice his mother gave him not to talk to strangers so they can go off into this house. Clowns in the 50s and 60s were cynically used to sell kids cereals and fast food, none of which is good for you. You get the feeling Clowns don’t exactly have children’s best interests at heart. Then there is John Wayne Gacy, who makes an appearance in this graphic novel. He really did dress up as a clown and entertain children while having murdered dozens of people.

Who is your favorite comic creator?

I grew up in the time when there were many near famous comic creators. I met Todd McFarlane at Comic Con when I was 13. Jim Lee, Rob Liefeld and Erik Larsen were the top artists. Frank Miller, Alan Moore and Grant Morrison were redefining comic book story telling. If I had to boil my personal taste down to a single creator that would have to be Chris Claremont who wrote for X-men for sixteen years. He completely ushered in a modern comic series with complex often morally ambiguous characters and long arching story lines that played out over years. His influence on comics is hard to appreciate today where writers start and end stories in months. Before his time, stories began and ended in every issue.

What is your favorite decade for horror?

I can’t say I have one. I have joked that hardcore fans only think good horror movies were made between 1974 and 1984 and span Texas Chainsaw Massacre, Halloween, Friday the 13th and Nightmare on Elm Street. That ten-year span defined horror and still does for modern audiences. However, the 1930s are a lost gem. I have always loved the Universal Monsters such as Bela Lugosi’s Dracula and Boris Karloff’s Frankenstein. They are the first true icons of cinema horror.

What is your earliest memory of being a horror fan?

My favorite cartoon as a kid was Scooby Doo because at its heart, the whole show is horror. It’s about a group of teens at an isolated place like a swamp or a factory and it’s haunted by some strange ghost. It’s made for kids, so the ending shows that there is always a real person behind it. And there the spookiness is broken up by the comedy of the characters. So, it’s a hybrid horror / mystery / comedy cartoon.

What’s next for Matthew Martino?

In 2016 I debuted a feature film I wrote and directed called Chainsaw Maidens from Hell. I also bought an old building and spent the next three years rehabilitating it into a small production studio with the goal of making more movies. However, the pandemic shutdowns squashed the hopes of this happening just as we were ready to start creating. The Legend of the Dark Clown might have been a movie, but the government shut down all film production for over a year. So, I collaborated with an artist online to make a comic version. Nowadays, most movie start off as a comic book then become movies or TV shows. Recently, the studio has come back to life. I shot a horror short called Misty Belles and the Lux Mallorum. Think of it as Harry Potter meets Ghostbusters. It debuts on Friday the 13th of January 2023. 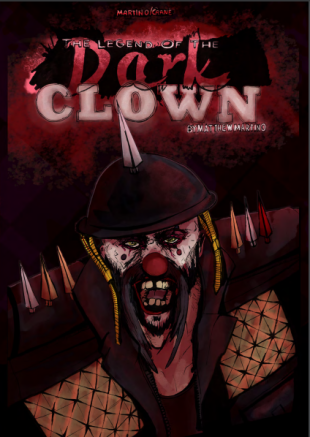