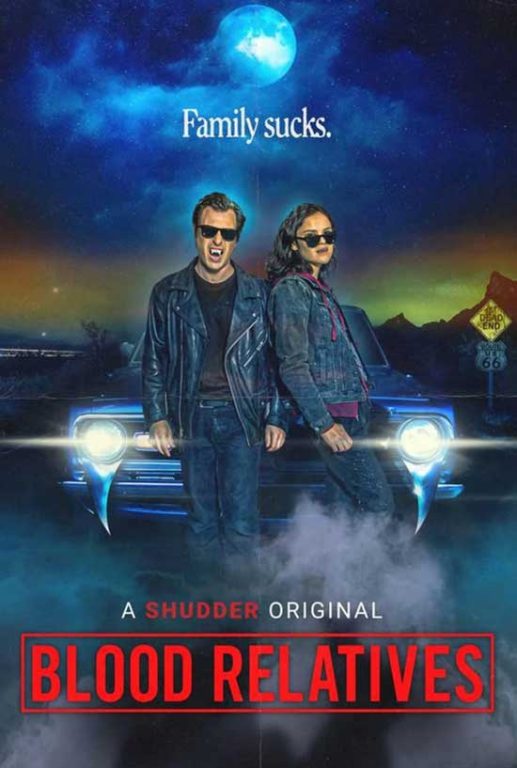 In BLOOD RELATIVES, Francis, a 115-year-old Yiddish vampire, still looks 35. He’s been roaming American backroads in his beat-up muscle car for decades, keeping to himself, and liking it that way. One day, a teenage kid, Jane, shows up. She says she’s his daughter, and she’s got the fangs to prove it. They go on the road, deciding whether to sink their teeth into family life.

The tagline is “Family Sucks”. A SHUDDER Original, Blood Relatives was directed, written, and stars Noah Segan (Knives Out, The Mind’s Eye, War Pigs) as Francis. Francis is a 115-year-old vampire. He’s on the road, and his car broke down. 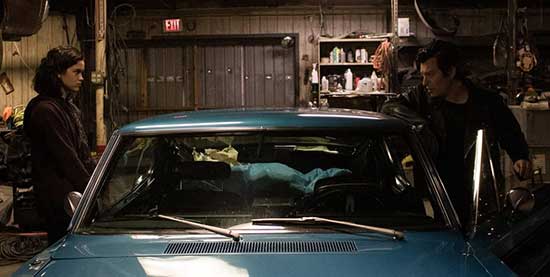 He winds up at a hotel/motel. He meets Hilda (Akasha Villalobos), and he begins his vampire DEXTER routine. He puts newspaper over the windows and listens to opera. He’s got good taste. He decides to try and fix the broken water heater. Jane (Victoria Morales) shows up, and well, she says she is his daughter.

Jane tells her story, her mom’s story, and it was a Wednesday. Life happens on a Wednesday. Jane can go out during the day but she has to cover up like her father. Hilda doesn’t buy Jane’s story and well, it leads to a rather funny moment with Hilda and Jane. Noah’s writing is funny, and this story is good so far.

Jane’s been feeding on certain animals, and a goose that chased her. “Oi Vey”, a Yiddish Vampire, the sarcasm gives me so much joy. Well, Jane’s Hilda situation gets worse. Francis has to help Jane along the way. He decides to take Jane along on the road trip after the Hilda situation. Jane tries to get know Francis, and she wants to go with home or she’ll wind up in Nebraska. He’s also not a tech savvy vampire.

They wind up in Kansas (insert Supernatural references here) and they want to stay for a while. Jane befriends Nathan (Jon Proudstar), and Francis wants the garage for the night/day, you know, vampire stuff. It’s funny because the movie is kind of how you imagine the life of a vampire would be like. Usually we meet rich, elegant, decadent, enticing, or extremely violent vampires. There isn’t always an in-between.

Francis is full of puns and sarcasm; Jane follows through on her own with her own schtick. Jane decides to check the trunk of the car and finds some stuff. She’s searching for truth, and family. Francis is it, and he wanted to stay alive. Francis tells Jane his story, and the importance of family. Jane wants to stay with her father, and find out what she is, and was.

It’s a heartwarming story in many ways, it’s the value of life and family. Some people search for something their entire lives and they may not find what they are searching for but some times they have memories or something they think is important. Some of us understand that longing, the need for someone or something that isn’t there. Francis takes Jane to Nebraska, and then he heads to Minnesota. 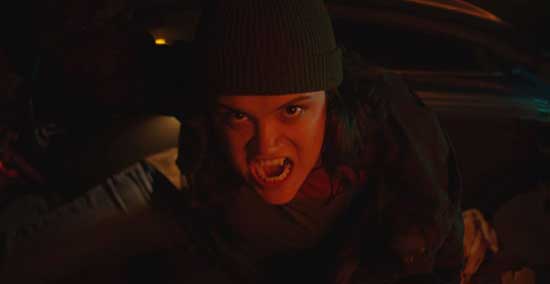 Francis goes to see a friend. He needs advice. Noah Segan is doing a great job. So… Francis has this heart-to-heart and he decides to be a father. He’s Schvitzing and “dressed like the Fonz” every day. That’s such a great line. Francis goes from being a vampire with no responsibility to being a father. He hasn’t quite reached Dad-level yet. Jane also meets a new friend/boyfriend, and BOY does he have a secret.

Francis thinks of ways for them to live and fit in. Josh Ruben also plays Roger Fieldner, he was in a situation with Francis, years ago, and Francis needs an identity so they can live. Blood Relatives is funny, it’s sweet, the dark humor is awesome. I would recommend watching Blood Relatives on SHUDDER. It has a great soundtrack as well. 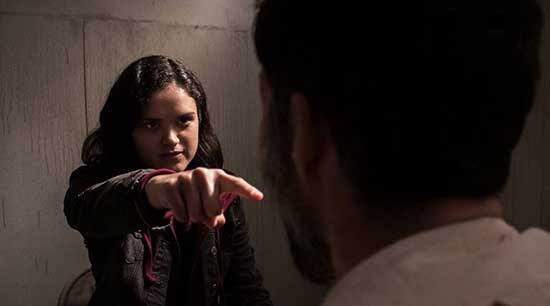 Noah Segan, I’ll be waiting for the werewolves and Bigfoot sequel or prequel.