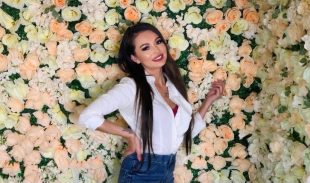 How did you get attached to Camp Pleasant Lake?

One of my good friends was also an actor in the film and he had told me to audition so I reached out to production and did just that I auditioned for a part and I was accepted, best decision I ever made.

Tell us about your character?

My characters name is Sofia, she is one of the campers at the camp ground she’s very quiet yet fierce and she can’t wait to be apart of all the festivities.

How was it working with director, Thomas Walton?

Working with Thomas Walton was so much fun, he’s very professional and helpful on set I learned a lot from him and will use those tools on my next journey.

Camp Pleasant Lake has a great all-star cast. What actors did you work with on this movie?

I worked with so many amazing actors and actresses I cannot name them all but some are Jonathan Lipnicki, Michael Pare, Elle Ringo, Brian Bell and Maritza Brikisak.

What is your favorite scene without giving too much away?

My favorite scene in the movie with out giving too much away was filming By the campfire at night such a cool scene!!

What was your most memorable moment on set?

My favorite memorable moment on set was when We were all filming next to the fire pit at night and while Michael pare was reciting his lines he was looking right in my eyes as he was filming and I thought that was such an iconic moment. For a professional celebrity to look at you while they are in their element it felt like a dream.

How would you compare this to classic 80’s camp movies like, Friday the 13th?

I would compare this to other classic 80’s camp movies because of the aspect of the trappings in the decade like clothing, atmosphere hair stiles etc but I will tell you this horror film isn’t like any 80’s camp movie I’ve ever seen thus far.

I got involved in acting when I was a child I was in a beauty pageant and they had us recite lines and songs for a skit we had to do in front of a live audience it was also televised live very intense but amazing. As I got older I started getting into acting more and more and I’ve been doing it since, this is my passion and my dream career. I’ve been in a few music videos for local artists here in Colorado, and a few commercials such as Turo. I filmed a movie recently with actors Kevin Sorbo, and Eric Robert’s called Devils knight and than this movie Camp Pleasant Lake I can’t wait to see what’s next.

Tell us a few of your favorite horror films?

A few of my favorite horror films are the Texas chainsaw massacre Trilogy, the conjoining trilogy, and of course I love so many of Stephen kings movies one in particular is called storm of the century. I am a horror movie junkie!

What’s next for Danica Najar – Redin

What’s next? Well I am going to keep on with my acting career. I would love to keep getting more auditions for films and show production companies what I can do. Being an actress is my passion and my dream career. I love it so much that I am willing to work so hard to make all of my dreams come true in this industry, at least I can say I tried, and I never gave up.