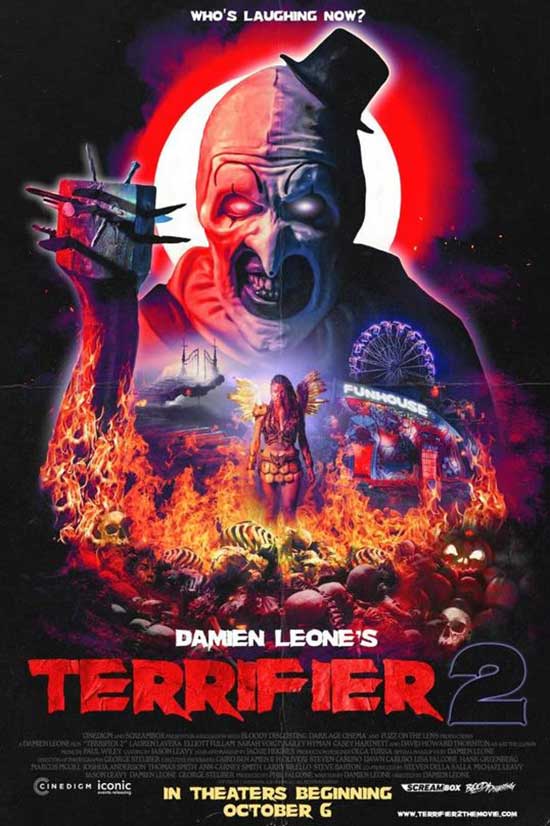 It’s 2 hours and 18 minutes of brutal old school horror. Directed and written by Damien Leone, Terrifier 2 has that great slasher feel to it.

The movie opens in an alley that I would normally tell people to avoid, “stay outta dark alleys folks.” Art the Clown has become a new staple in the horror community. Fans have already started cosplaying as Art, the merchandise is flowing, and the horror community seems to enjoy this oh-so-wicked clown portrayed by David Howard Thornton who when you meet him, he’s so cool, he’s down to earth, he will chat with you about movies and shenanigans happening in the world. 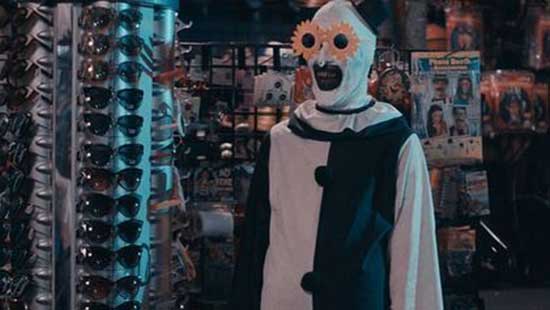 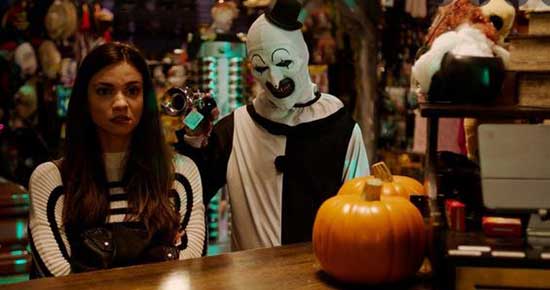 So, we got popcorn, Witch’s Tea Party’s from Gallows Hill Spirits Co., and we’re set to watch Terrifier 2. We meet Sienna (Lauren LaVera), her mom, and her brother Jonathan (Elliott Fullam). Jonathan has quite the fascination with Art the Clown. My entire life I had a fascination with psychology, True Crime, you know the “dark and macabre.” It wasn’t always so cool and mainstream to be a horror fan, and some people wouldn’t dare admit to watching a True Crime Podcast. 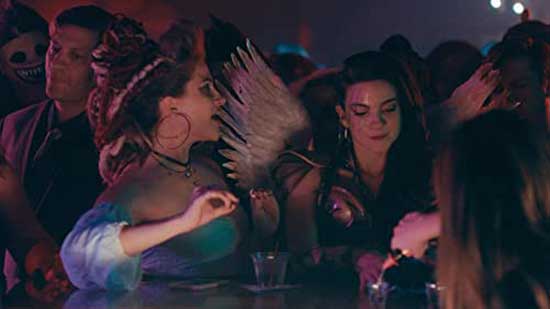 Some people were not phased, some people had put horror fans in a box. We were the weirdos, the ones who would, “grow up and possibly become serial killers.” People got a glimpse of serial killers, what they actually look like, and people found out they were from small towns, big cities, working with the public. They had families, one of them was a lawyer, he even escaped. Oh, you know Ted Bundy. Bundy would wind up getting the death penalty but the fascination never went away.

Dahmer seems to be the current fascinating serial killer. We’ve seen everything from documentaries, Podcasts, movies, and fan clubs. The fan clubs are disturbing, and women who want to marry serial killers. You do realize they are killers, it’s not oh, you’re dating a “bad boy.” THEY KILL PEOPLE, TAKE LIVES.

Horror fans are some of the nicest, most genuine people I’ve ever met in life. I digress, went off-course but there is somewhat of a point to this. Jonathan is fascinated with Art but he is heading in the serial killer direction. That depends on him.

Meanwhile, Sienna is having one hell of a trippy dream or hallucinating, lord, it’s wild. Art gets a SCARFACE moment. Sienna is seeing things, having weird moments, and Art has an imaginary friend. That’s nice. Georgia MacPhail portrays the Demon Girl, she’s like a mini–Art. Jenna Kanell was in Terrifier, as Tara Heyes, and she is in Terrifier 2. Jenna is a bad ass. 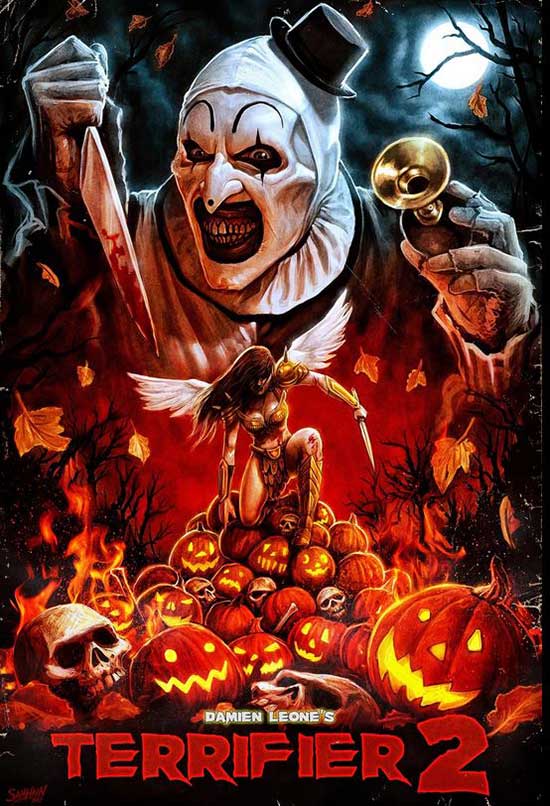 Jonathan’s friends Eric (Griffin Santopietro) and Sean (Owen Myre) are being obnoxious. Well, BRING ON Felissa Rose as Ms. Principe. She takes no shit. Jonathan is seeing things now, maybe it’s real, maybe not? Oh, that “no running in the hallways” with blood. I want to say that could be a Wes Craven tribute?!

Sienna is with her friends at school, they are talking about Victoria Heyes (Samantha Scaffidi). Sienna is in a costume shop, she is browsing around, not with the same enthusiasm I have when I walk into Spirit Halloween. Damien Leone did a good job creating this movie, he made a character that the fans love, a great slasher film that’s fun. It’s brutal and violence and gore may be your cup of tea, maybe it’s not but you have to think about the movie.

Art the Clown is a brutal, wild, unhinged character, he’s not trying to hide the scary. He’s not tip-toeing around it, he’s facing it head-on. He’s bulldozing through human beings. I’d love to visit this Halloween shop in the movie. Okay, so as usual I have to discuss locations. I love locations in movies. They become characters within the films.

The special effects and make-up people did a good job, they went next level with the kills. Sienna is making this awesome costume for Halloween. Sienna becomes a final girl. She is kicking ass. Art’s kills are wild. The special effects, the make-up, the blood. It’s something to devour, not in one sitting of course but Art delivers with a variety of weapons, blood-shed that would upset Dexter Morgan.

If you get squeamish, or you don’t like gory bloody movies with the bone-breaking sounds added, this may not be the movie for you. There is a kill scene that does indeed rival the hacksaw scene from Terrifier, Damien Leone said he would hope that it would rival the hacksaw scene. I LOVE that they are watching George A. Romero’s Night of the Living Dead in Terrifier 2. 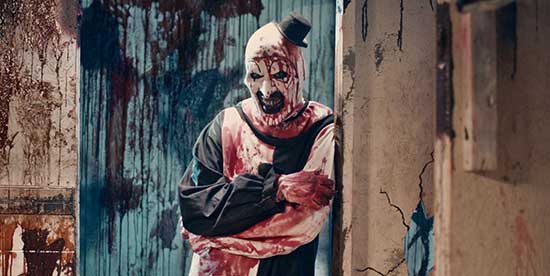 Art does everything from taking out the trash to using a head as a candy bowl. The kids thought nothing of this oozie gooey decapitated head filled with Halloween treats. Sienna’s friends have the unfortunate pleasure of meeting Art while Sienna stays calm, cool, and collected. David Howard Thornton has added a few different movements, quirks, and of course weapons. He does a great job of portraying Art and he has his Demon friend. 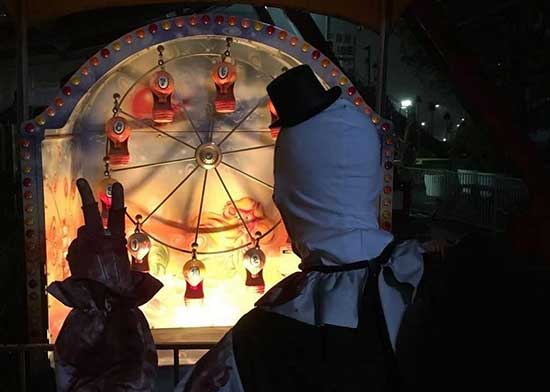 Apparently, Art has been watching all of the Dahmer documentaries and movies on Netflix. I’m still not sure why they continuously use Dahmer, there is a plethora of serial killers, I mean… at this point, I could reenact Dahmer’s story. The sad thing is people don’t seem to think about the people who lost their lives, the people who were brutally murdered.

Art has that cold, urge to kill. John Wayne Gacy would dress up like a clown. Clowns are not people’s favorite acts. When you think of a clown, you think of this unscrupulous not really funny individual who is hiding behind make-up, a smile, and possible insanity. Sienna is bad ass, Lauren LaVera does such a great job. She has been through a lot and yet she doesn’t quit. It’s the Jamie Lee way.

Art doesn’t quit, and when I spoke with Director/writer/producer, Damien Leone, he mentioned he would like to do a third Terrifier. I don’t want to spoil this movie for anyone. It’s a fun slasher, go watch it.

Make sure to watch Terrifier 2.