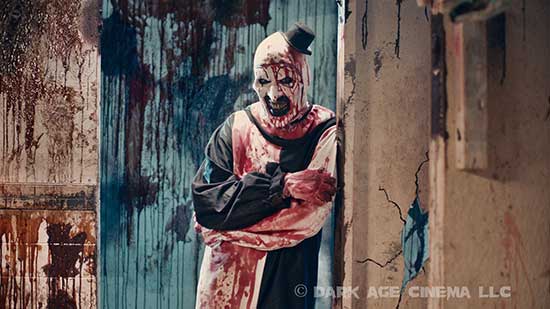 Director, writer, and producer Damien Leone talks to Horrornews.net for an exclusive about Terrifier 2, and all things Art the Clown. Oh, yes, part three may be coming.

Hi Damien, it’s great to talk to you. I watched Terrifier 2, it’s so much fun, so, when is part 3 coming?

D.L.- Thank you. You know how long we’ve been getting the question, when is part two coming out? It’s become an ongoing joke between the whole cast and crew. I would like to do at least one more, I don’t know when, but I’m already writing the script so, we’ll see.

What influenced Terrifier in general, and obviously part two. Art the Clown has become such a celebrated character. A few of my friends already cosplay as Art, and I always laugh when they break character and start talking. You don’t talk.

Art is a fun character, it’s a great slasher film. How did everything manifest?

D.L.- Thank you. I created this character back in 2005, and he was just a little, sort of secondary character in a short film. Everybody immediately talked about Art, he stole the movie, and everyone said you have to do something else with that character. Then, I made another short film where he was solely the main character, it was all focused-on Art the Clown, and I turned it into a slasher, and then everybody saw that they said, you have to turn that into a feature [film], this character is too cool. There’s too much going on, and that’s been the evolution with Art. The fan base gets a little more popular, and I’ve been trying to make Terrifier for so many years. It was before IT came out, and back then there were no clown movies. Nobody wanted to put up money for a clown movie, I specifically got the note from producers that clowns can’t sell a movie. Then, all of the sudden IT comes out and becomes one of the highest grossing horror movies of all time. That’s where it’s gone, and once I made Terrifier, I knew I was officially in love with Art the Clown, and he has become a horror extension of me. There are so many situations and scenarios that I want to put him in. I know there is a big story to tell with this character. I knew while I was filming Terrifier that there would be a part two so, that’s why I specifically had him rise from the dead so the audience would know that he would be back. 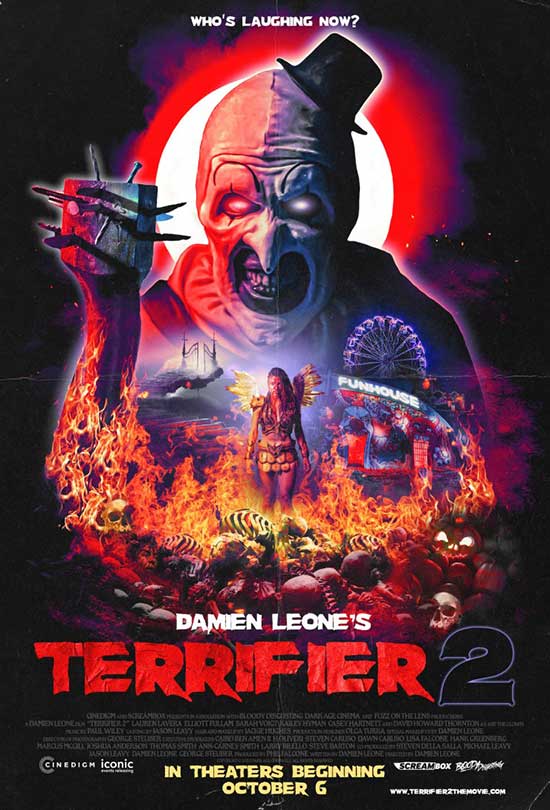 The kills, the make-up, special effects. The split scene, the hacksaw scene is iconic from Terrifier, how did you prepare everyone for Terrifier 2?

D.L.- Yes, Nerve-wracking. There’s one scene in part two that we wanted to at least rival the hacksaw scene from part one. I told everybody that this scene has to be good. This was so overwhelming, and I do all of the special effects myself.

D.L.- Yes, for part one, all I had was my producer Phil helping me. He’s not a special effect or a trained make-up artists so I taught him as much as he could do on Terrifier. So, going into part two, it was quadruple the kill scenes, and I said there is no way I’m going to be able to do all of this myself. I tried to hire another FX company to do like, forty percent of the effects, and about a month before we started shooting, they bailed. Now we we’re screwed. So, now we had to jump into shooting without a lot of the effects being built which was scary. We would shoot a week and then have to build effects. That’s one of the reasons why this movie took almost three years to make. That one kill scene took us seven days to shoot and it’s a two-minute scene but it took seven days to shoot.

How do you feel now that it’s here? I know it coming to the Regal theater and it’s awesome to see the posters. How do you feel? My friends and I are going to see it even though I’ve seen it.

D.L.- Oh my gosh, it’s very surreal but it’s such an amazing feeling. I’m trying to get it to sink in especially with the theaters. In some theaters, they are showing the trailer. I believe in Regal; they are showing it before Pearl so that’s wild. That’s all a testament to Bloody Disgusting and Cinedigm getting behind this movie and believing in it, and pushing it into the theaters. This is pretty unprecedented, I can’t think of another movie, this sort of indie movie. It’s two hours and eighteen minutes for a slasher, and it’s not rated, and it gets in so many theaters. It’s amazing to have a team like that behind this movie. It feels amazing, the whole experience has been great. I’m excited to see what people think about it, after all this time. 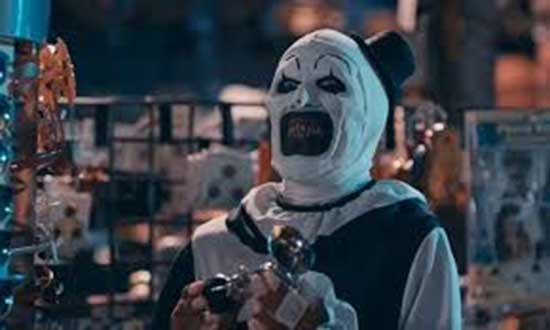 What are you working on next and do you have any more conventions this year?

D.L.- No we’re already booked up from now until March. I would say I could potentially go into another Terrifier or there is another horror project that I’m working on. I would imagine that it’s easier to raise funds for a Terrifier 3 at this point? I don’t know if it’s the smartest thing to do right now? Maybe I should let it rest a little bit, let the smoke clear?! I want to see what could be improved and see the reactions from people, but we’ll see.

What do you want to say to people who will be watching Terrifier 2 and that love Terrifier and Art the Clown?

D.L.- I think the less they know, that’s better. If they’re a fan of part one, I can’t imagine this movie letting them down. It has everything that I know they love from part one, and it’s taken on a bigger scope. It has an amazing protagonist, and the Sienna (Lauren LaVera) character who is the final girl in this, it’s my favorite part of the movie. It’s cool to have a nemesis, a protagonist that’s on par with Art. I think it’s going to be exciting.

Lauren LaVera kicked ass. Terrifier 2 kicked ass. You did an amazing job. It was great talking to you. Thank you.

D.L.- Thank you for the kind words. 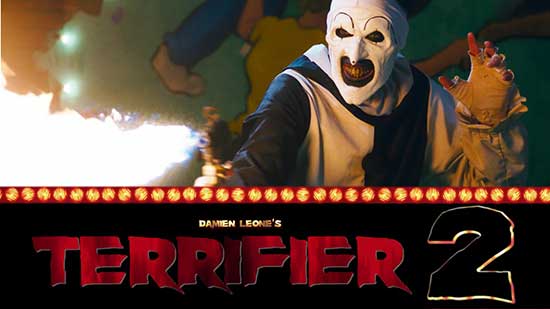 Written and Directed By: Damien Leone

IN THEATERS: October 6, 2022 (Cinedigm in Partnership With Iconic Events)

SYNOPSIS: After being resurrected by a sinister entity, Art the Clown returns to the timid town of Miles County where he targets a teenage girl and her younger brother on Halloween night.