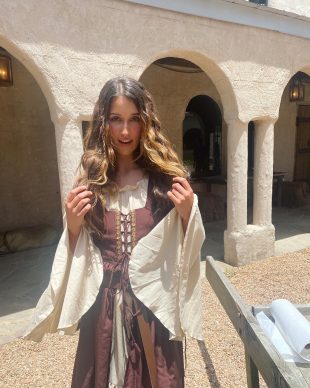 Tell us about your character Ruth in the movie, Devil’s Knight?

Ruth was an elegant maiden in a fantasy world. She has to use her enchanting beauty to extract money from men to help her ailing mother.

How do you prepare for a period piece, especially a medieval one like Devil’s Knight?

I watched a lot of hours studying films and series like Outlander that are related to this period. In fact, I enjoyed it so much that I would welcome an opportunity to work on more medieval period films.

How did you get attached to Devil’s Knight? –

I met so many nice people on the set of my last movie, Bermuda Island. One of them was a producer who helped me by suggesting that I be cast for Devil’s Knight.

What was it like working with director Adam Werth?

Adam is an amazing and talented person to work with. He is a kind person, but a firm director who knows what he wants and how to get it out of his cast members.

What is your most memorable moment from working on Devil’s Knight?

I was able to dress up and play a role in a medieval film which had been a goal of mine. When everybody is dressed up while shooting a film in a castle, it is a totally fun experience. 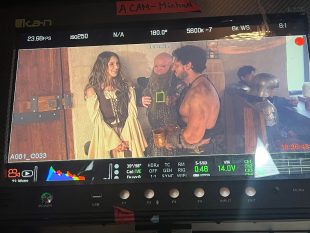 What was your greatest challenge while filming Devil’s Knight?

Well, I grew up in another country. The Netherlands is very different from the United States. I am constantly observing and learning from other people here. And especially on set. I’m going to miss those people and I am looking forward to the next time I have the privilege of working on set.

I have wanted to be an actress since I was a little kid in wooden shoes (kidding, sort of). Growing up in The Netherlands, where the film industry was very small, I wanted to go to Hollywood once I turned 18. That’s what I told my mom and dad. And they were very supportive. So I went to study at an acting school and then at UCLA. I feel super fortunate that I am now working on some feature films.

What are some of your acting goals?

I think I would enjoy the experience of working on a Marvel film. It would be super cool to have a roll in an action film, too. I am a huge fan of Jason Statham. Presently, I am taking some stunt skills classes so I can be ready if and when the opportunity comes!

Are you a big fan of horror and fantasy movies – Do you have any favorites?

I do like the horror genre, but I really can’t handle it if they’re super scary, haha. I get frightened easily and then can’t get to sleep later. To act in a horror film would be cool though. It is really fun to work with gory stuff because Halloween is my favorite evening to go out and have fun with friends. And yes, I like fantasy movies like Lord of the Rings and Game of Thrones.

What’s next for Isabelle Urganci?

I am actually shooting a movie this September in West Virginia. I’ll be playing a challenging character. She’s a serial killer who wears clothes from the 1950’s era. I feel super fortunate to have already had such diverse roles and am looking forward to taking a short break to see my friends and family in the Netherlands over the holidays.