“It’s called Slay the Princess, and it’s a psychological horror and dark comedy visual novel where you’re tasked with slaying a princess before she can end the entire world, which is allegedly something she is going to do unless you manage to stop her. There’s a lot of branching in this one, with the story taking some very dramatic turns right away based on your early decisions.

It’s also FULLY VOICE ACTED by the incredible Jonathan Sims and Nichole Goodnight! We are so lucky to have them both working with us to bring this game to life.”

Hello Tony and Abby, please tell us about Slay the Princess, and how this idea manifested for the two of you?

T: Slay the Princess is a cosmic horror story about romance, morality, and choice, told in the vein of a choose-your-own-adventure book. The player character is sent to a remote cabin in the woods and an unnamed “Narrator” task them with slaying a Princess held prisoner in the cabin’s basement. The narrator alleges that the Princess will end the world if not slain, but refuses to elaborate any further. It’s up to the player to decide who to believe, and the things they say and the choices they make shape how the story unfolds. There’s a lot of twists along the way, and we can’t say much more about the premise without giving some of them away! 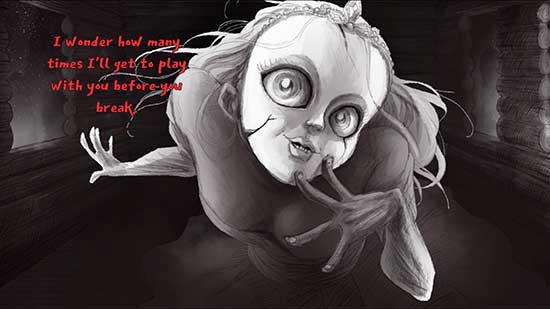 The idea for the game came to us pretty quickly – we were inspired after playing an entry from this past year’s Ludum Dare, a game jam where participants have to make an entire game start to finish in a single weekend. We really enjoyed Daniel Mullin’s game for that jam this year, Bit Buddy, and it had us thinking about what sort of ideas we might be able to explore if we did a project with a more limited scope. Slay the Princess isn’t really a game jam game – the demo took us a good 2 or 3 weeks from start to finish, and the full version of the game is probably going to take us several months, but the driving concept–what kind of horror story can we tell with one location and one visible character–definitely takes inspiration from that front.

Our first game, Scarlet Hollow, has been a very ambitious undertaking, with dozens of characters and locations, thousands of art assets, and a higher word count than the entirety of The Lord of the Rings– and it’s not even halfway done, so it’s been a fun creative exercise to work on something much smaller in scope!

What has been the most challenging aspect for both of you?

A: The biggest challenge for me was the timeline we laid out for ourselves for the demo, which we had to have done by a certain date, giving me about a week to finish all the art needed for the whole demo. It was about 200 pieces, and it was extremely difficult, but knowing I managed that amount of work in that timeframe does mean I’m not easily daunted by any future deadlines. Though here’s hoping they’re a little less formidable from here on out! 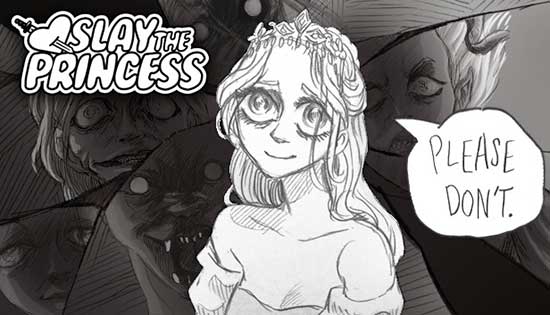 T: For me it’s probably been the pressure of the sudden surge in popularity. Scarlet Hollow’s done quite well for itself, but the reception to Slay the Princess, at least in terms of the quantity of people interested in it, is way more than I’m used to do dealing with.

When will Slay the Princess be released and where can everyone buy it?

T: We’re targeting a release for some time next summer. It’ll be available on Steam and itch for sure, and we might port it to consoles depending on how it performs.

Take us through the process of creating this unique, amazing game?

A: Tony came up with the concept and wrote the first draft directly into the engine all while I was visiting family, because neither one of us is very good at having downtime and not filling it with some new project. Then when I got home I got to work on concept art, script edits, and the first assets, and after a whirlwind couple of weeks where we both worked nearly nonstop, it was done and we’d wound up making an entire demo with voice acting and everything.

For the art side of things, I didn’t go with my usual heavily detailed pen-and-ink style, instead going with only mechanical pencils and working at roughly half the size I’m used to, the only digital aspects being a splash of warm gray tones to make everything pop. That meant I could finish art much faster, and though I have no intention of retiring the cross-hatching ink style I’m known for, I also like the sketchier look– pencils often feel a lot more energetic and dynamic than inks.

T: Abby pretty much covered it! 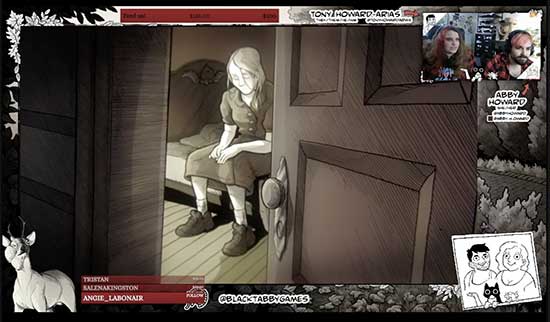 What do you want to say to everyone that is excited to play the game?

T: Not a whole lot – just a heartfelt expression of gratitude for caring so much about our work!

A: Same here: a huge thank you to everyone who’s become so invested in our game! One of the most important parts of making things for me is being able to share it with other people, so it brings me a lot of joy to see folks engage with our work like this. Thanks for playing!!

T: Our schedules are pretty booked for the next however-many-years. We’re still working on Scarlet Hollow – we’re hoping to have Episode 4 finished for Halloween, and then there’s another three to go after that point. Slay the Princess is going to release between Episodes 4 and 5 of Scarlet Hollow, and then when we’ve finished both games, I’ll at least be taking a much-needed break. I know Abby finds it impossible to stop working.

A: I’m currently working on the art assets for Episode 4, which are going a lot faster than usual. Once both our games are done, I’ll be returning to my webcomic The Last Halloween as my main project and working on that until it’s done. I’m sure Tony will also wind up coming up with some new project in that time– as Slay the Princess has shown, they are incapable of sitting on their thumbs for more than a few days before throwing themselves into some new passion.