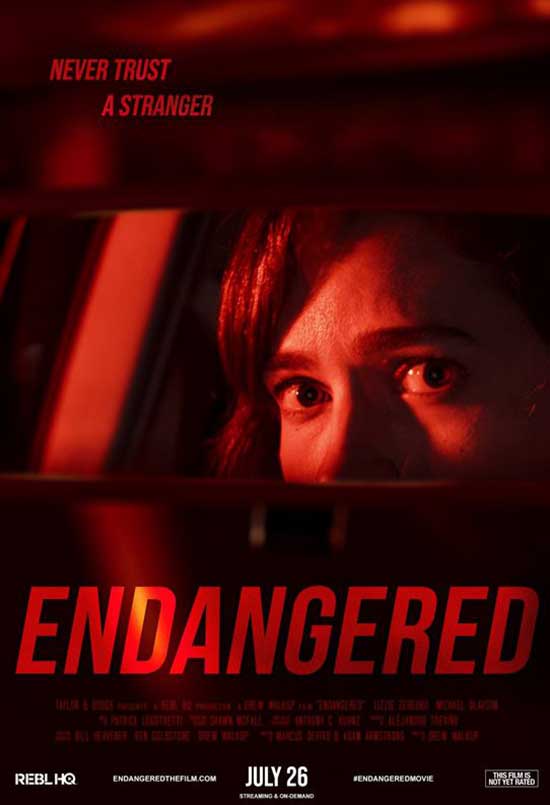 Alison, an aspiring architect, spends her evenings trying to make ends meet as a ride-share driver. While wrapping up her shift, she decides to take on one last passenger – only to find herself in unexpected danger when she discovers the mysterious stranger is not whom he appears to be.

Alison is cajoled into taking the fare against her better judgement, and when she discovers blood-stained jewelry and a gun in her passenger’s bag, she begins to fear that she may not make it out of this trip alive. Through a twisted and unsettling turn of events, Alison appeals to her enigmatic passenger for help. In over her head, she fights to get through the night by covering her tracks, avoiding the police, and ultimately discovering who her inscrutable passenger truly is.

In this villainous thriller, director Drew Walkup perfectly captures the eerie and chilling risks one takes when getting in a car with a stranger. Compounded with brilliant performances from Lizzie Zerebko and Michael Olavson, ENDANGERED will keep you on the edge of your seat until the heart-stopping end.

“Heart stopping…” That’s an understatement. I checked the back seat of my car all the time. Force of habit from life, you know.

Endangered was directed by Drew Walkup, and written by Adam Armstrong, and Marcus Devivo.

We meet Alison Meyers portrayed amazingly by Lizzie Zerebko. Alison is life-searching, soul-searching, searching in general for jobs, a career, something stable. What does she find? A ride-share job. Most of have done a lot of jobs just to have a job, we do the mundane actions of life no matter what. We submit resumes, we make phone to companies no longer answer phones. We try to go in places, and maybe talk to someone, drop off a resume. Nope, that doesn’t really happen either.

The world moves faster, time goes by, some people keep trying, the persistence, the drive, the want, the need, that fuel that makes you get up in the morning, that’s what Alison is doing. She has a plan, she has a structure, a routine. She is going to smash the f*ck out of that plan and make it a reality. Over the past few years, we have seen quite a few rideshare, even back in the day, an insane hitchhiker or three or four. In fact, if you haven’t seen The Hitcher, you need to watch that right now.

Alison is working while people talk in her car, they chat about random shit, about life, Alison looks like she wants to drive off a cliff or maybe just put earbuds in and not listen to people. Alison is driving, and driving. She gets another passenger, Neil (J.R. Ridge).

When you’re in your car a lot, you tend to notice a lot more stuff. You notice people, actions, what people do in parking lots. So, Alison picks up “Neil.” Neil doesn’t look like Neil. The passenger portrayed wickedly by Michael Olavson. Neil’s probably off somewhere. I don’t know yet, I won’t spoil it but… pretty sure. The passenger gets in like Jason Statham would get in a car he’s driving. He’s intense, he’s staring at Alison in the mirror most of the time. He doesn’t say a lot but he does talk to her.

People get jobs in life to survive, to pay bills, to make the day better. Some people love what they do. They find that niche and they hone it every single day, every single waking hour. The speech the passenger delivers about night time is pretty accurate. Human beings don’t often see everything they are supposed to notice. We often rush time when time already goes so fast.

The pace of the movie has that nerve-wracking momentum. I have a feeling what I think might happen but I still want to know. I’m on the edge. Now, the passenger wants to make a stop and Lizzie decides to try and investigate. Oh noooooo. The passenger is so nonchalant. He’s just going with the flow. We meet Detective Hartford (Ryan Forrestal). Michael Olavson is really doing a great job in this role. 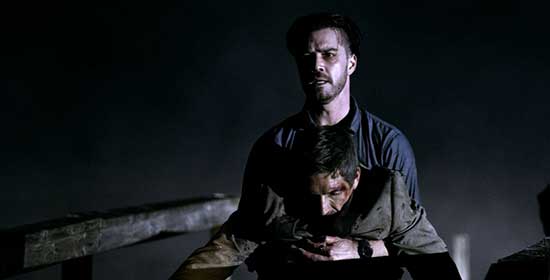 Michael has that whole dark and mysterious, those “Al Pacino” eyes as I like to say. Something tragic happens and Alison seems to have some regret, she hasn’t completely panicked which is a good sign that the writers decided to make her a strong person, and not a woman who is just hysterical. I think there may be a few key homages in this movie also. I love the colors, the cinematography, the locations, the acting is great.

I would recommend watching Endangered. Have fun, grab some snacks, a beverage of choice, friends, family of choice, and have fun watching this intensely wild movie. It’s filled with twists and turns, it’s a different type of monster. Human beings truly are the scariest of all monsters. Stay safe out there everyone.