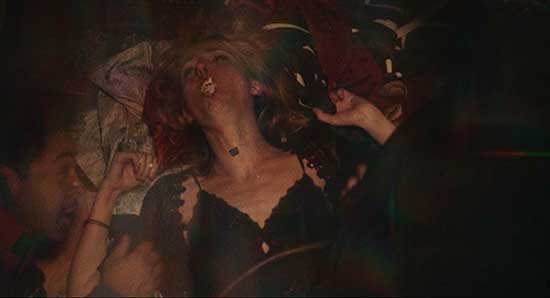 Follows Roscoe, a seedy motel maintenance man, after discovering some powerful hallucinogenic worms he meets Benny, They fall in love making worms together before embarking on an odyssey of sex and violence.

Everyone wants to feel good. Some get their high from working out; others from eating their favorite foods. Then again, some literally get their fix from drugs. But have you tried worms? It’s not slang for a trashy street drug; we’re talking literal earth worms. Find out what happens if you do in Alex Phillips’ “All Jacked Up and Full of Worms” which made its world premiere at Fantasia Festival. 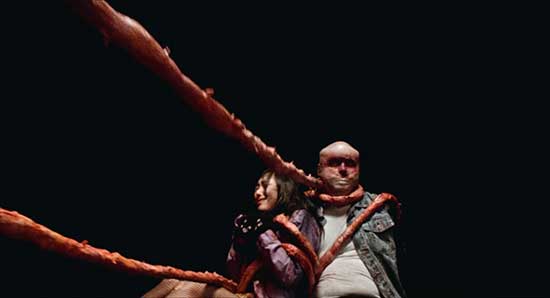 Benny (Trevor Dawkins) has had (and still does) numerous mental issues in his life, becoming a regular patient in mental institutions. He believes he is raising a child when he actually just ordered a very odd doll online. He’s also grown close to a local prostitute who he seems to have more of an emotional connection than a physical one. Roscoe (Phillip Andre Botello) is a motel maintenance man who lives with his girlfriend and another man in an oddly open and tense relationship. Then there’s Biff (Mike Lopez) who, while donning washed up clown make-up, wanders the streets with his female partner, wreaking havoc and having sex in alleyways. What do these three have in common? They all “do” worms. What does that entail, you might ask? It is exactly what it means: they either consume earth worms by eating them, snorting them, or opening a wound on their body to insert worms inside to get the most intense high you can imagine. All of their paths, while on the constant search for more of these slimy creatures, are about to intersect. 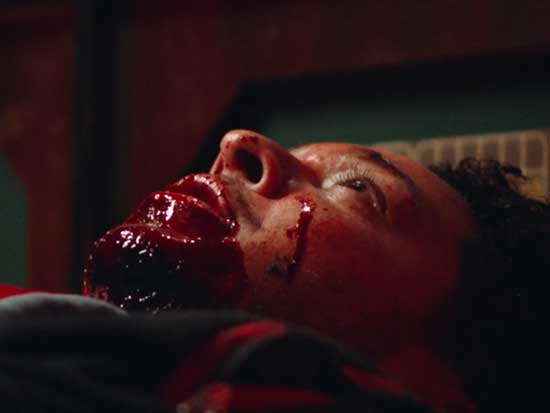 After working on a few short films, Alex Phillips presented his first feature film that he wrote and directed himself, albeit that it runs for a rather quick 72 minutes. There is quite a bit of dark humor throughout the screenplay that will either force viewers to chuckle or cringe in discomfort, depending on where you see yourself on the spectrum of this type of humor. His style of directing is difficult to describe, since the film takes on the trippy context of a hallucinatory drug and was therefore filmed in a hallucinatory way, topped with visual and audio cues that highlight the effect of consuming worms. It would be interesting to discover a second feature film from Phillips that didn’t have to do with drugs to discover his “sober” directorial techniques, so to speak.

The character of Benny, played by Trevor Dawkins, should be the most popular onscreen for his odd behavior, especially alone, in addition to his ways of sexually relieving himself. Dawkins demonstrates a vast array of emotions throughout the film, going from excitement to disappointment to sheer frustration towards himself; all in very entertaining fashion. The rest of the cast is quite average in terms of grasping attention as well as captivating the audience’s attention, sadly. 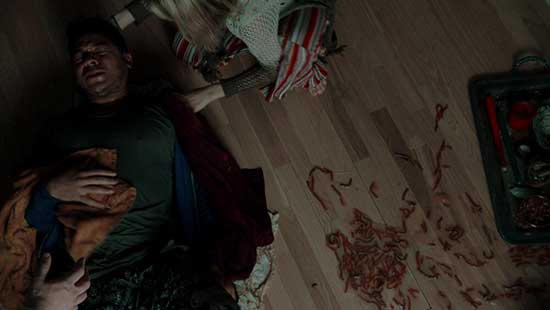 The unfortunate thing about “All Jacked Up and Full of Worms” is that there is no true common thread to follow throughout the screenplay. There is nothing to anticipate, to fear, to discover. There is no development of any storyline other than the characters’ paths intermingling with each other as they pursue their insatiable craving for worms, making new friends along the way. The endgame isn’t that much more pleasing, as you’ll be witness to a metaphorical scene of romance and bodily fluids, all while some characters physically seem to morph or melt into oblivion. There is somewhat of an explanation as to why the worms give produce such an effect on humans when consumed, but the film seemed a little too ambitious for its own good. To add to the aimless mess is a very odd soundtrack, sometimes sprinkled with nothing but percussions as to increase the level of bizarreness. Weirdness is great; that’s what sets plain old vanilla movies from others. “Society” (1989) is weird. “Videodrome” (1983) is odd. “Humanoids from the Deep” (1980) is strange. However, all of these films (albeit, probably with a larger budget, but that’s beside the “storyline” point) had a tale to follow with an ultimate endgame, as predictable or not as it may be. Phillips’ film simply tumbles and rolls around in the dirt to attempt to culminate to a climatic scene that just doesn’t give the right payoff.

As mentioned above, it would be intriguing to discover another feature film from Alex Phillips that didn’t deal with hallucinatory drugs, with a more concrete script, because he does possess some great directorial skills. You won’t be missing much if you skip “All Jacked Up and Full of Worms” as it receives a disappointing score of 4/10.