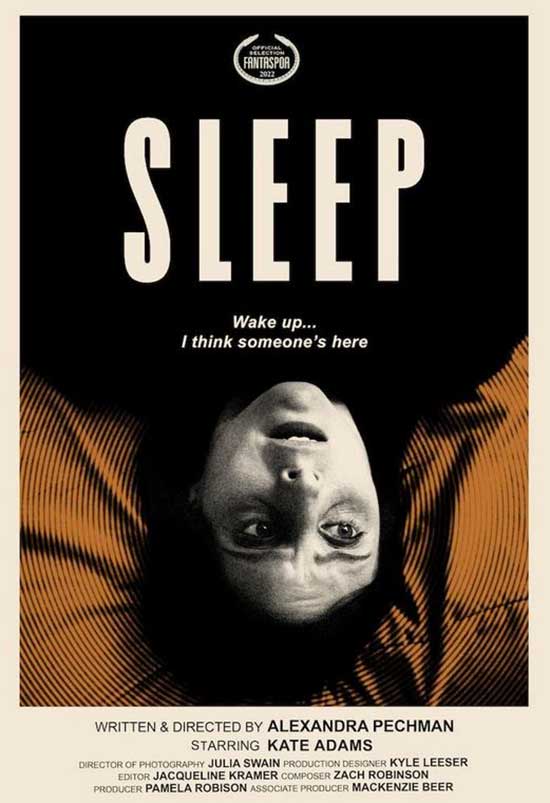 A woman struggles with her lifelong fear of home invasion, in this three-and-a-half-minute horror film told in a single shot.

Sleep was included with the Dangerous Visions Vol. 1- CFF 2022 Horror & Genre Shorts Showcase. It was written and directed by Alexandra Pechman, and stars Kate Adams. The short films have been incredible so far. I was fascinated by Sleep because well, insomnia and sleep can be good and bad for some people.

Some people just lay down at night or in the daytime, and go right to sleep. Some of us stay awake, barely sleep. We think about sleep but why sleep if you don’t have to sleep. We should sleep though. So many people struggle with insomnia, sleep paralysis, sleep problems in general.

Sleep opens with a lady who seemed to be half-ass asleep yet she wasn’t. She woke up because she heard something, yet she looks terrified like someone with sleep paralysis. I’m always amazed when I see a film was shot in one single shot.

It’s three minutes and forty-six seconds. When fears take over, that’s a difficult struggle. It’s a toss-up between anxiety, and struggling with yourself. If you can’t sleep you wind up worse some times. Lack of sleep can be harmful to people. The artwork above the bed is funny in one way, and not funny in another. I guess with my sense of humor, it’s funny.

Okay, that last scene, what in the actual fuck? That was a great short film.