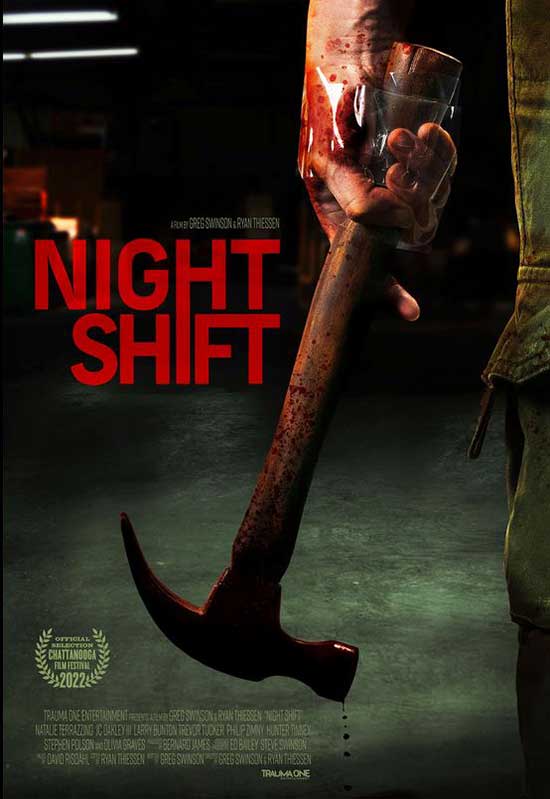 After a break-in occurs during her first night on the job, the lone night shift janitor must fight to survive when she becomes the target of the masked intruders.

It’s the last of the Chattanooga Film Festival, I’m a little sad. It feels like I was just getting prepared and it’s over already. It was an honor to be a part of this festival. The talented folks that run the festival, and all the filmmakers, writers, actors, producers, and more. In a world where chaos is non-stop, we get a moment or two to watch a movie and forget about the madness.

Night Shift, no not that Night Shift from 1982, but a brand-new Night Shift directed by Greg Swinson and Ryan Thiessen. It was written by Greg Swinson. It stars Natalie Terrazzino as Karen, JC Oakley III, Larry Bunton, Phillip Zimny, and Trevor Tucker.

It’s been a minute since I got stressed out watching a movie. You want someone to run, and they just stand there. We meet Karen, and Glenn who seems like a real ballbuster but he just wants to go bowling. I was excited for this movie. The Chattanooga Film Festival saved it for the last night.

Karen has a life, she has a kid, an ex, and needs a job. What do you do when you need to get your shit together? You get a job. Karen is the new nigh shift person, and she just wants to do her job. Glenn is the employee that’s been at the job way too long, he is stressed but the job is his so, you know how that goes.

A building with a faulty door. We meet two rude dudes who know Karen and also know about Karen’s life. They are creepy and rude. I get suspect vibes already from the dude in the hat. Karen seems like a survivor. I’m rooting for her. This is actually a movie you can get into. It’s refreshing.

So, Tina (Georgia Kate Haege) is watching Karen’s kid. Boy this is problematic. Karen had a moment of rage and now she has to clean up a mess, she also thinks about calling her ex, don’t do it, don’t do it. Listen to yourself. Now we have a random delivery dude showing up, I’m pretty sure that’s a set up. Why do people answer door at night? I’m sensing Karen went through something because she is on alert! Karen and Natalie Terrazzino’s playing Karen with this alertness, and she’s smart, and aware of what’s going on. It’s very Jodie Foster, Clarice Starling.

When you realize she is no longer alone in that big warehouse building, the goosebumps just show up. She’s also on to that bullshit delivery man. She’s ambushed, and she’s familiar with this warehouse for only being there for one night.

Four guys with masks on, and chasing a woman around a warehouse. I like the story, I appreciate the Jodie Foster garage door scene, it may be me reaching for something that’s not there but, “Hello Clarice.”

They are ripping phone cords out, and just being overall menaces. Four men chasing a woman, that’s “Bitch” behavior to me. Ohhhh nooo, she is trying to get away, they are going to get you… “They’re coming to get you Barbara.” You read that in his voice. Oh Karen, I could have told you that would happen.

The dudes are grunting and growling. It makes you root for Karen even more. Okay, most of us know the rule about going near the killer or killers when they are down and out. I’m starting to think her ex-husband planned this whole thing.

I appreciate the suspense and intensity of this movie. It’s a fun movie yet it’s scary because this is more of a real-life situation. Fighting for your life and to be with your child or family will provide even more fight for you.

I’m on edge watching this movie. I’m rooting for Karen. Tough guys not so tough without the mask and the knife. This movie shows a few things, never use kids against one another. I’ve never disliked a character more in a movie than this dude. No offense JC Oakley III, I know it’s a movie.

I’ve never rooted for a movie character than this lady just trying to get to her kid. When you find out if you already didn’t find out who is indeed trying to kill Karen. It’s wild. This movie was brutal and intense but everything is okay. “Everything is okay.” Never forget a person who can thrive in darkness will always shine in the light. Now don’t open doors to strangers, don’t get in vans with strangers, always be aware of your surroundings. Watch a horror movie, it may help you. Be safe folks. Make sure to watch Night Shift, at least three times. It’s great.