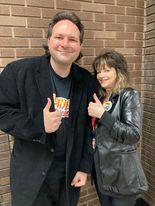 From script–to–screen, how close did CLOWN IN THE WOODS come to its original vision?
I would say about 97% of my vision for Clowns in the Woods came true. There were some actors and locations I wish I could of gotten but because of COVID-19 I had to settle for some changes.

What was your favorite day on set and why? What scene did you enjoy directing the most?
My favorite day on set was with Dalton Letta’s French bulldog Bruno who was in the prank scene which caused Marcus death. His dog helped me not be in so much stress on set that day because of how cute and loveable he was. I enjoyed directing the scene with John Renna as Mr. Belson who is set on fire because of how fun he was on set that day. 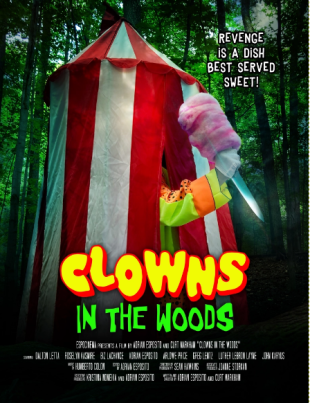 How do you get a film to stand out in the crowd in today’s landscape?
I wanted my film to stand out by having a social commentary on bullying, bigotry and homophobia and including people with disabilities in a low budget horror movie as actors that weren’t in stereotypical roles.

What other filmmakers inspire you to do what you do?
Filmmakers who inspire me to do what I want to do are George A. Romero, Lloyd Kaufman, John Carpenter, Ralph Bakshi, Alejandro Jodorowsky and Quinton Tarantino.

What is your favorite horror decade and why? What is the next step in your filmmaking career?
My favorite horror decade is from the mid 70s through the 80’s because of how horror filmmakers were free in a way to express what they wanted to show in their films before things really changed in the 1990’s and 2000’s. My next step in my filmmaking career is a movie project I’ve been trying to do since 2016 called Special Needs Revolt but have been having trouble getting the financing because of it’s content as a political satire on Trump and the fact that the main action hero who saves the day has Down syndrome.