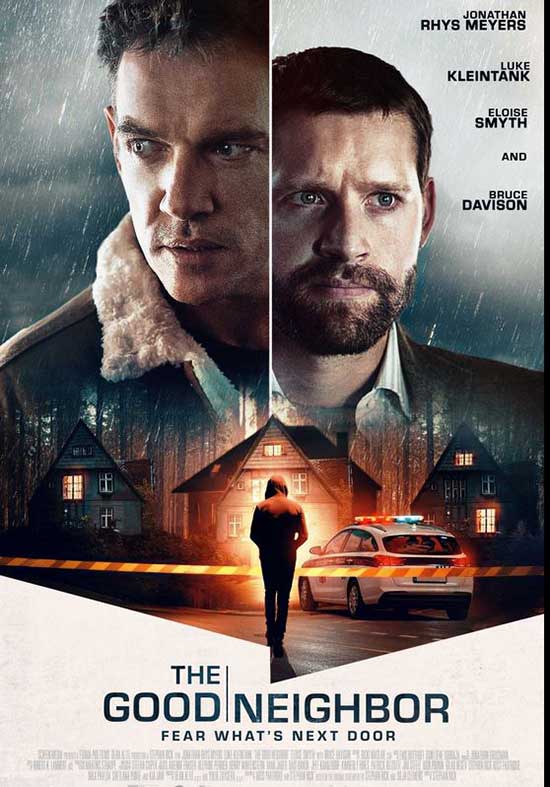 A nightmarish evening unfolds when neighbors David (Luke Kleintank) and Robert (Jonathan Rhys Meyers) hit a woman on her bike and flee. When her sister arrives searching for the truth, Robert does unspeakable things to protect their secret. The film is a remake of the German thriller Unter Nachbarnwhich marked Rick’s feature film debut. Coming full circle, Rick now revisits his Hitchcockian thriller ten years after the making to terrify American audiences with the same question: “How well do you know your neighbor?”

The Good Neighbor was directed by Stephan Rick, and written by Silja Clemens, Ross Partridge, and Stephan Rick (based on the original screenplay)

The film opens with such a beautiful scene. Before I go further, Hide and Seek was amazing starring Jonathan Rhys Meyers. We meet David (Luke Kleintank) and Grant portrayed by the amazingly talented Bruce Davidson. David is there for work, and he’s feeling his way around.

There isn’t anything I love more than a good neighbor-inspired scary movie. One of the best movies ever, EVER is The Burbs, if you haven’t seen The Burbs, what are you doing in life? No, I know life is life, its chaotic, family, friends, work, school, you name it, people do it. The Burbs is an iconic film by Joe Dante. There are plenty of other creepy neighbor movies you can watch.

So, it’s dark out now, and David can’t get his car started so he heads over to his neighbor’s house… Wrong move, Sir… Wrong move… Call Triple AAA. David meets Robert played oh so eloquently by Jonathan Rhys Meyers, the dark hair, the messy shirt, he looks like he was busy doing something. Robert is charming and funny, and he’s only been onscreen for a minute.

David heads back to the garage to add the gas to the car. Robert decides to mosey on over to David’s and he also just happens to be a mechanic. They are BFFs already. David is too in his head so he wants to get out. This is the first movie I think I watched where there was a club scene with lots of people. It feels strange but not too strange.

David heads over to Robert’s house, and he is ready to go. They go to a club and David meets Janine (Ieva Florence), and she’s drinking a, “short trip to hell.” Sounds like a good drink to me. Janine has a long ass phone number, if one number rubs off that man’s arm, he is screwed. I don’t want to be pessimistic or anything but I feel like maybe Robert knows Janine.

Robert and David leave the club, and something happens. It’s bad, beyond bad. Jonathan Rhys Meyers is an actor that can portray any character, he’s doing a great job. Luke Kleintank is also deep into his character. So, now these two are going to keep this destructively horrible secret.

Robert doesn’t seem to value empathy. He seems relaxed, a tad bit too relaxed. The police are involved now, obviously. David isn’t handling this as well as Robert is. David feels empathy and he also meets Janine’s sister. Robert is just Mr. Efficient when it comes to all things. 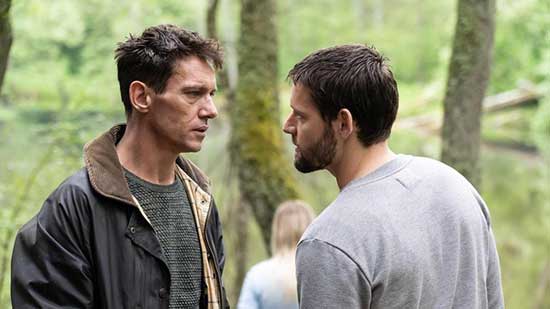 The Good Neighbor is moving at a good pace, the actors are doing a great job. The cinematography is great. The locations have become characters within the film. I love the homes; I love that they are sort of matching houses. It gives it a little something extra. Robert is just exuding this confidence. He’s not worried about jack shit.

He does have a few small things that bother him, or it may not bother him, he may just be fixated on it. David might be the missing link for Robert. A brother, father, sister, mother… A person he may have loved or lost? It’s creepy because it makes you wonder more.

My heart goes out to Janine’s sister, she is so heartbroken and desperate for answers. This is one of those movies that’s fun but intense. You become invested in these characters. Stephan Rick truly gave it heart and soul. I would recommend watching The Good Neighbor.

Make sure to check out The Good Neighbor.