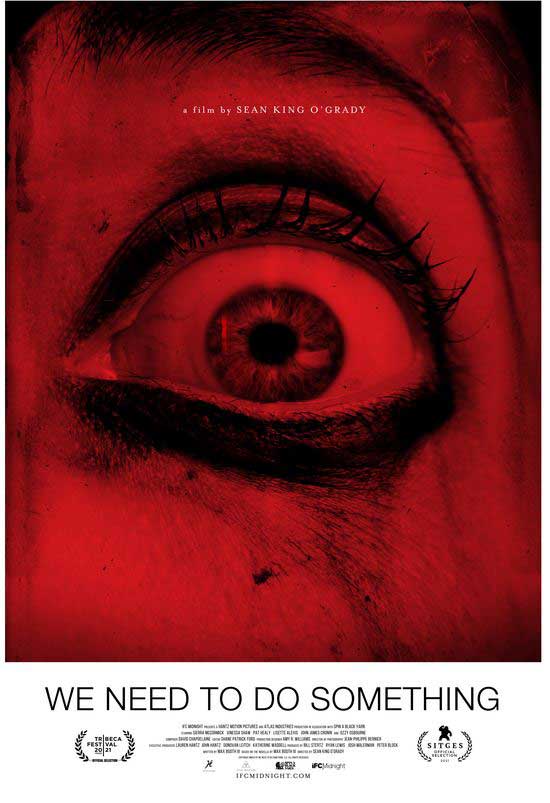 Seeking Shelter from a storm, a family find themselves trapped for days with no sign of rescue and untold evils lurking just beyond the walls in this wildly fun horse-of-horrors thrill ride.

Sean King O’Grady directed We Need To Do Something, and Max Booth III wrote it. It’s based on the novella.

The film opens with a stunning view of the town the family lives in, and we meet the family. Diane the mom portrayed by Vinessa Shaw, Melissa (Sierra McCormick), Robert the father (Pat Healy), and Bobby (John James Cronin). There is a bad storm, possibly a tornado, and the family decides to lock themselves in the bathroom. Normally it’s a basement but a bathroom could be good too. The bathroom looks big by the way, like a living room. 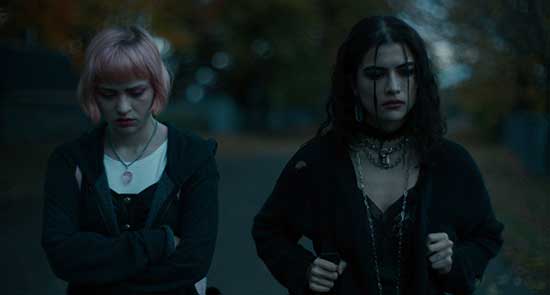 The father seems to be short with his family. No patience and annoyed. Robert and Diane don’t want each other on each other’s phones either. It’s rather strange. There is a flashback to Melissa with her friend Amy, and she wants to stay in contact with Amy during the storm. They wind up getting trapped in the bathroom, and Melissa’s phone gets lost.

No help has showed up yet, they are seeing snakes. The father has an alcohol problem, he resorts to chugging mouth wash. What in the Poltergeist is going on? So, now they hear noises from outside the door, and no one has come to help. Ozzy Osbourne is the voice of the Good Boy. The family thinks it’s a dog that’s come to save them but it’s not a dog. 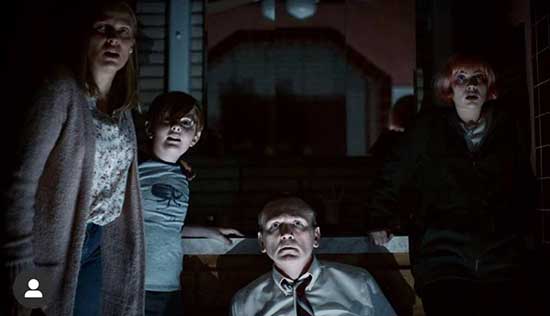 Melisa and Amy (Lisette Alexis) have been dabbling in magic, maybe dark magic? Who knows? A lot is happening to this family. I’m not sure how many days they have been trapped in this bathroom but it’s insane. We Have To Do Something is a supernatural mind-fuck of a movie. It takes you on various creepy routes. You find yourself fascinated, and you want to know what this mysterious creature or force is? Will Reverend Kane show up and scare the shit out of the creature?

Vinessa Shaw and Pat Healy are so good in this movie. They are playing off of each other, and you don’t trust Robert at all, at least I don’t. Sierra McCormick put her all into Melissa, she gave this tortured character heart and soul. The Voice at the Door is Dan John Miller.

The cast and the story are good. It makes you think about life but it’s a fun scary movie. You can grab a drink, snacks, and have a fun movie to watch with friends. We find out some more wild stuff and also, is Amy real? It gets weird. When I say that, I sort of mean is Amy another version of Melissa? Maybe, I took the deep dive too far? It’s a trippy movie. The cinematography is amazing. The fact that it takes place in a bathroom is crazy because you would think it would be BLAH! But, it’s not. 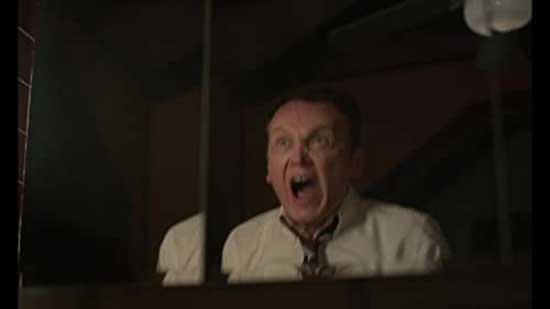 Also, in regards to witch craft, learn and understand witchcraft. Don’t mess with anything you don’t fully understand. Amy reminds me of Nancy from The Craft, she wants all of this and isn’t entirely sure if it will fully happen? Vinessa Shaw is so calm and collected throughout the movie. She’s a force to reckoned with.

This family is barely holding on, and Robert can’t get himself under control. People always think kids don’t know stuff in regards to their parents. If there is some kind of sadness, heartache, or things like being an alcoholic or an addict. Kids know, they can see it and sense it. It’s horrible to grow up in situations like that. You don’t know the next move, the next screaming match? It’s torment. 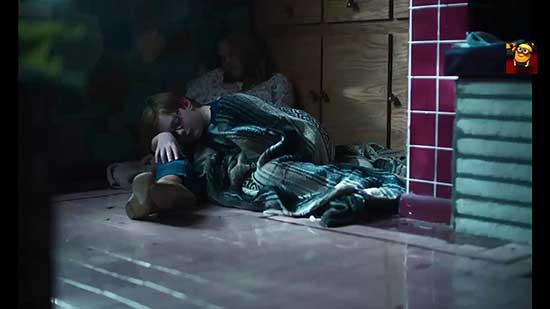 I would suggest picking up the Blu-Ray and watching the movie. We Need To So Something is a supernatural mind-fuck of a movie. It takes you on this journey that is frightening.

Make sure to check out We Need To Do Something.