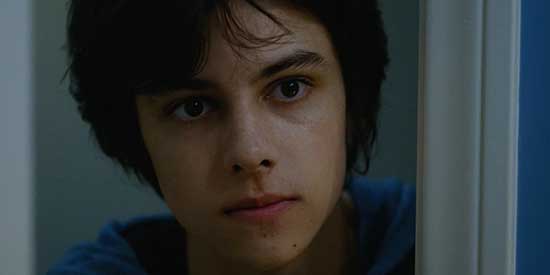 To survive the night, a teenage boy from a broken home must uncover the mystery behind his silent stalker.

Starring Amy Acker, James Carpinello, and Jack Carpinello. It was directed by Melissa Love and David Love. Creeper opens with Jason and his friend hanging out. Someone is following Jason.

Jason goes home to a chaotic life: fighting parents, an abusive father. He’s rude and should be knocked TF out. Abuse and abusive relationships are horrible. People don’t realize the toll and stress it takes on a person. Not just the parents but the kids. Kids know a lot more than people think. They want to keep the peace for the kids or oh, don’t fight in front of the kids. Or they just fight no matter what or who is there.

Jason’s mom is giving him all the excuses for why she is not leaving. People don’t think. You don’t have to stay; it may seem like there is no way out but there is always a way out. The dad winds up hitting someone in the driveway. It’s the same person that’s been following Jason. The women who stand by the men that are abusive, I’m not sure what makes them do that. I’m also not sure what a person preach about how important family is and then they go and let their man hurt one of their family members.

I’ll never understand that. This is one wild story. This stranger is somehow connected to Jason. It’s wild, WILD, this is a twist, one hell of a twist. I would recommend watching Creeper.

Make sure to check out CREEPER and Panic Fest